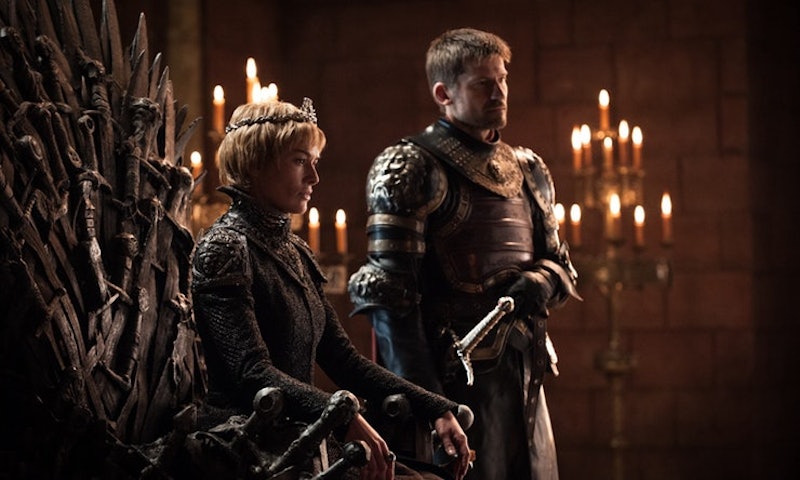 A major clue about the upcoming Game of Thrones episode may have just dropped. Among the images HBO released from Season 7, Episode 5, a photo of Cersei Lannister seems to hints Jaime's fate. Cersei — who's already lost all of her children and seems only feel connected to her twin brother, Jaime Lannister — is in a pretty precarious position. At the end of Episode 3 this season, she flexed a huge amount of strength by destroying Daenerys' ships and seizing Highgarden to repay her family's debt to the Iron Bank.

But last episode, Daenerys went all Targaryen on Cersei and fought back with Dothraki fury and serious dragon fire. Though Jaime survived much of the main battle attack, he chooses to attempt to kill Daenerys in a very vulnerable moment. Unfortunately for him, the Mother of Dragons had her giant baby dragon Drogon by her side. And, thanks to (presumably Bronn) pushing him into nearby water, Jaime very narrowly missed dying in a fiery fate like so many of his crew. But it's unclear if Jaime survives the water he's plunged into, since we last see him slowly and helplessly floating to the bottom thanks to his heavy armor.

In the new picture, a detached Cersei sits alone on a large bed staring off into the distance, making it seem like she might be mourning her long-time bed partner and brother. Could this be confirming Jaime's death?

The placement of the miserable look specifically in a near-empty bedroom sure makes it seem like she's missing Jaime. Then again, given Cersei is pretty much always angry and scheming, it's possible she just got word he's been injured, or that huge amounts of her loot (and army) have been destroyed by another powerful army and real life dragons. Since Cersei has been wanting power her entire life, perhaps it's just the thought of losing the Iron Throne so quickly that is bothering her in this photo. Or maybe she's actually starting to feel some guilt about all the atrocities she's committed to get to power.

OK, that last one isn't likely. But, the point is, the sad look on her face could be attributed to any number of concerns Cersei could be pondering at the moment. The pictures placement, of course, seems to hint that this particular misery could be directly related to the loss of her brother.

Another newly released photo of Tyrion Lannister doesn't seem to fare too well for Jaime either. In the image, Tyrion walks alone amongst the ashes of the Lannister army, looking pretty down about the whole scene.

You'd think that if maybe he found his brother, even to capture as a valuable prisoner, he wouldn't hang his head so low. If they did capture his brother alive, he would probably spend his time catching up with him rather than walking through the wreckage with a forlorn look on his face.

Not too many characters are portrayed in the newly released pictures. You can see Sam hard at work with Gilly, presumably finding out more White Walker secrets that will end up helping his old pal Jon Snow.

And, thank goodness, fire and ice share some more screen time with more meetings between Daenerys and Jon Snow at Dragonstone.

From the looks of the pictures at least, this episode will focus more on the current Iron Throne frontrunner, Daenerys. But, the episode is titled "Eastwatch," which is the name of one of the remaining fortresses at The Wall, and happens to be where White Walkers and the Night King are presumably headed.

So no matter what Jaime's outcome may be, they're all in a lot of trouble if the White Walkers get past that fortress.