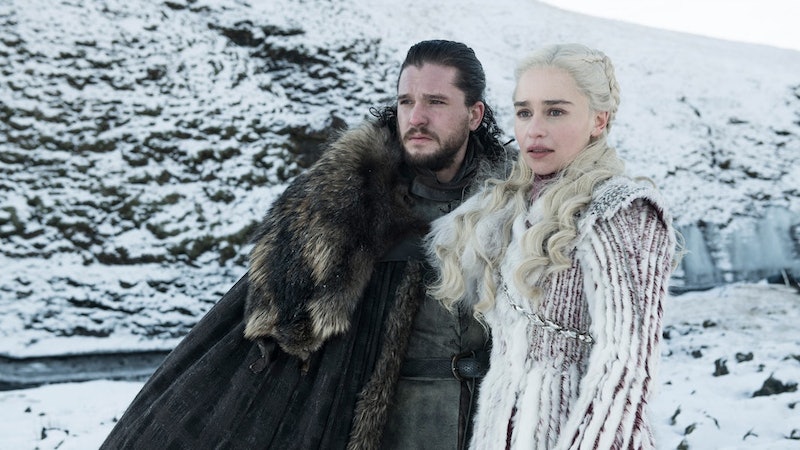 Winter is coming… again. On Nov. 25, Game of Thrones' cryptic "Winter is coming" Tweet had fans proposing all sorts of theories about whether there's more in store for the series. Other than the prominent slogan, the message contained no additional context or clues. Given that the series wrapped its eighth and final season in May, what could the Tweet possibly mean? Though the winter season is literally on its way, some fans are convinced there's a deeper message here.

Shortly after it was posted, fans joked it might signal the announcement of a Season 8 remake. After all, a viral petition calling on the network to hire more "competent writers" to re-create Game of Thrones' final season amassed over 385,000 signatures. However, a remake doesn't seem likely. HBO programming chief Casey Bloys already shut down the possibility at a press tour event in July. "There are few downsides to having a hugely popular show, but one I can think of is when you try to end it, many people have big opinions on how it should end,” Bloys said, as per Variety. “The petition shows a lot of enthusiasm and passion for the show, but it wasn’t something that we seriously considered.”

While Game of Thrones has finished its tenure at HBO, the narrative will still live on through other avenues: a prequel, its DVD box set, and, of course, its books. One of the most prominent theories about the Tweet suggests that author George R.R. Martin, who penned the books, will soon release The Winds of Winter. The upcoming novel will be the sixth book from the fantasy series A Song of Ice and Fire. Martin wrote in his blog in May that he planned to have the finished novel “in [his] hand” by August 2020.

If the news is not, in fact, related to The Winds of Winter, it could have to do with the HBO prequel House of the Dragon. Based on Martin’s novel Fire & Blood, the prequel would chronicle the history of the House Targaryen, which housed Daenerys Targaryen (Emilia Clarke) and Jon Snow (Kit Harington). The project is currently in the works at the cable network, and a projected release date has not been disclosed. Finally, the news could have to do with the highly-anticipated, special features-filled Season 8 DVD and Blu-ray box set out on Dec. 3.

Whatever it is that may be coming, fans are awaiting anxiously.

More like this
'Stranger Things' Season 4 Volume 2 Trailer Teases New Episodes Coming July 1
By Grace Wehniainen and Gabrielle Bondi
The 'Ms. Marvel' Review Bombing Controversy, Explained
By Radhika Menon
Fans Think Beyoncé’s “Break My Soul” Is Calling For A New Great Resignation
By Sam Ramsden
BTS Announced An Indefinite Hiatus & The ARMY Is Freaking Out On Twitter
By Sam Ramsden
Get Even More From Bustle — Sign Up For The Newsletter