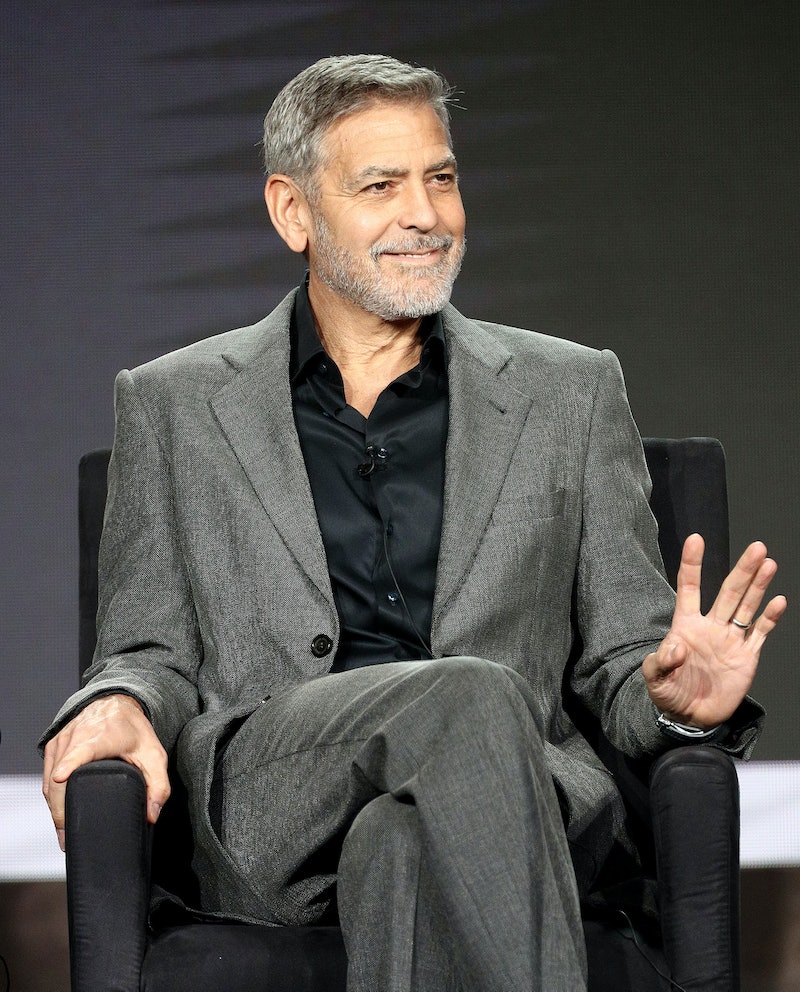 George Clooney may be good friends with the Duke and Duchess of Sussex, but that doesn't mean that he'll be taking on a very important role when it comes to baby Sussex. According to InStyle, Clooney was asked about being the godparent to Meghan Markle and Prince Harry's baby recently. And his response to the prospect of taking on godfather duties is just too funny.

During a press conference for his new series on Hulu, Catch-22, Clooney addressed whether he would be the godfather of Markle and Harry's child. Given that he and his wife, Amal Clooney, attended the pair's May 2017 nuptials, and that they're reportedly "much closer than the headlines let on," per the Daily Mail, it's easy to see why some would speculate about the possibility. Although, the actor simply joked about the matter, saying, "Oh yes, I’ll be godfather of the royals apparently." He then continued to clarify that he would not be a godparent, lest anyone think that he was being serious, and said, "No!"

He continued to joke that he already has plenty of dad duties to deal with, as he's the father of twins, Ella and Alexander, “I’m a father of twins, I have enough sh– to deal with — literally!" So, don't count on the actor to be the godfather of the Duke and Duchess of Sussex's baby, even though he's stated before, in a 2017 interview with The Hollywood Reporter, that he has a great handle on some of the messier parts of looking after babies. Well, at least Markle and Harry can ring him up for some advice on that front.

It will be sometime until the world finds out who Harry and Markle have chosen as their child's godparents. The soon-to-be parents are set to welcome their first child sometime in the spring and a christening, which is when they'll announce the child's godparents, won't occur until a couple of months following the baby's birth, as was the case with the Duke and Duchess of Cambridge's kids. But, based on who Prince William and Kate Middleton chose as the godparents of their three children, you can expect some of Harry and Markle's friends to take over godparent duties.

While Clooney may not find himself amongst those chosen to be a godparent, you can always count on him to support his friends. During the same recent press conference, he spoke out in support of Markle, particularly in light of how some of the media have been treating her, "They’re just chasing Meghan Markle everywhere, she’s been pursued and vilified."

He continued, "She’s a woman who is seven months pregnant and she has been pursued and vilified and chased in the same way that Diana was and it’s history repeating itself," adding, in reference to Princess Diana's tragic 1997 car accident, "We’ve seen how that ends." Those are some pretty strong (and all too accurate) words from Clooney there. Considering that he is reportedly good friends with the mom-to-be, it makes sense that he would speak out to defend her in such a passionate manner.

So, even though he won't be the godparent to Markle and Harry's baby, it's clear that Clooney is still there to support his friends when it matters the most.