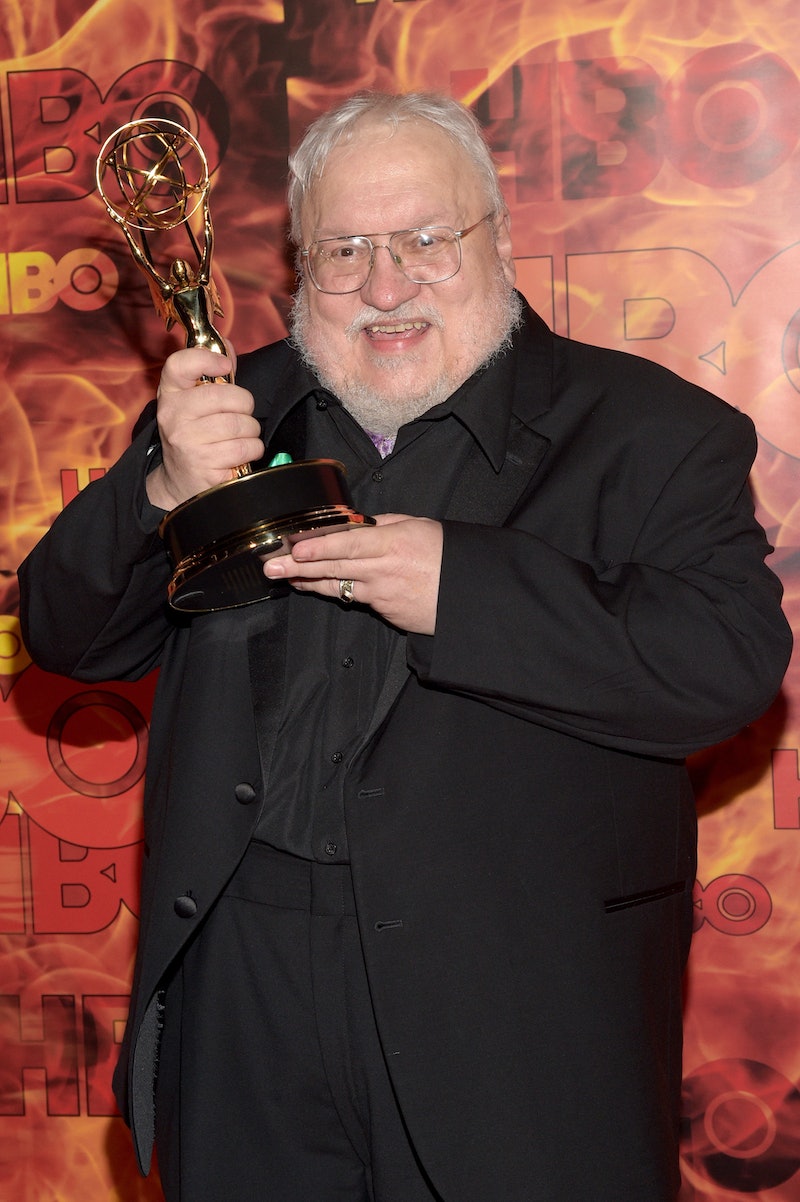 The real-life father of the fictional Mother of Dragons has a present for you, and no, it's not the next book in A Song of Ice & Fire. This photo of young George R. R. Martin is so good, it will make you forget all about how The Winds of Winter still isn't out. The author posted a '70s-era photo of himself to Twitter on Thursday, March 29, and it's making fans feel a lot of feelings. The "George R. R. Martin looked like Kit Harington" vibes aren't quite back, but they're enough to make folks want to take a second look.

"#TBT I give you the rarely seen, highly elusive, clean shaven adult GRRM circa 1972," Martin wrote on Twitter, accompanied by what appears to be a polaroid shot of his younger days. The fantasy author was born Sept. 20, 1948, which means that he was approximately 23 years old at the time. The first novel in A Song of Ice & Fire was published in 1996, which means this was photographed 24 years before he decided to torment the world by offing Ned Stark in a book ostensibly about Ned Stark. (By the way, that's not a spoiler. If you chose to read an article on the Game of Thrones author as a young man, you're either deeply invested in the series or accidentally scrolled down too far where if you do end up reading this sentence, it won't matter to you anyway.)

So, without further ado: Here is the photo of a young George R. R. Martin in the early 1970s.

It's something else, isn't it? The era-appropriate glasses. The Jon Snow flow. That absurd wallpaper. It wouldn't look out of place as elaborate Game of Thrones set dressing, or perhaps as the logo before a crackly government PSA from the same era.

Who took the photo, and where, and why all remain a mystery. But not for long — get your thumbtacks and red string ready, because it's time for an investigation. Per Martin's website bio, the following information is available about his life when the photo was taken:

First: Of course, he directed chess tournaments. Nothing on this Earth makes as much sense as the man behind Game of Thrones directing chess tournaments in his 20s. Anyway, the photo was probably taken in Chicago, Illinois, and while one hopes that it's his kitchen that boasted the funky wallpaper, there's no way to know for sure. Further, the assorted personal photos at the bottom of Martin's website can provide further clues. His 1972 look appears to fall squarely between the eras he's labeled "Chicago" and "Dubuque." The famous beard appears to have crept in during the Dubuque era.

With his hats, quasi-stylish outfits, and tremendous, bushy beard, Martin looks the part of a renowned fantasy author. He inherits the part so well, it's hard to believe he was ever just another nerdy guy at Northwestern.

The photo of a young George R. R. Martin also proves that no matter how chill you are in your early 20s, you can still grown up to be compared to one of the most handsome-slash-adorable men on Earth and be a household name in the process. He's an inspiration, really. Now, where's the Winds of Winter novel? Asking for a friend.