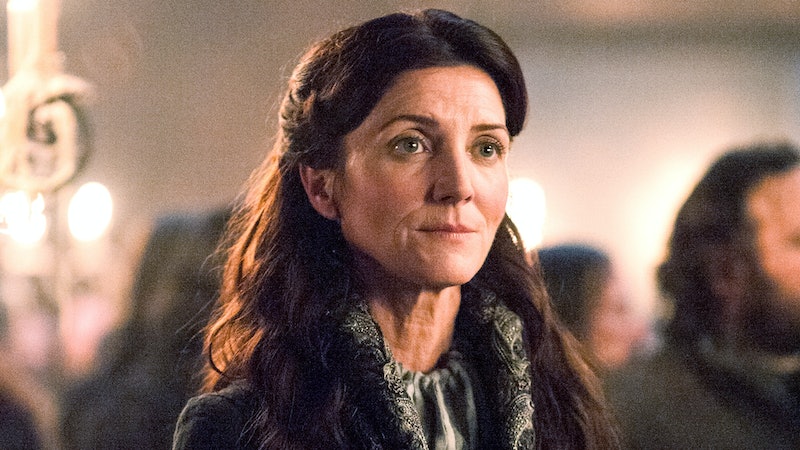 George R.R. Martin is pretty famous for brutally killing off fan-favorite characters in his A Song of Ice and Fire books — but he got a taste of his own medicine when the showrunners of Game of Thrones cut one of George R.R. Martin's favorite characters. In A Song of Ice and Fire, Lady Stoneheart is the resurrected corpse of Catelyn Stark whom, as fans will remember — *spoilers ahead* — was murdered all the way back in season 3, or in the third book A Storm of Swords, at the infamous Red Wedding. Lady Stoneheart is a much more vengeful version of Catelyn Stark; she can't speak due to her slit throat, and yet still leads the Bannerless Men to enact revenge on Walder. She was an interesting character that George R.R. Martin felt "re-imbued" Catelyn "with a kind of life" — and yet the showrunners decided against pursuing this storyline, leaving Martin as bereft as the rest of us feel when he casually kills off another of our favorite characters.

Speaking to Time about this cut Game of Thrones character, Martin was very generous towards the showrunners' re-interpretation of his story. Despite the fact that he literally invented Catelyn, Martin said that the showrunners' less vengeful depiction of her was "equally valid," and that "you can tell either story about her."

Martin also gave some interesting insight into why he developed the character of Lady Stoneheart in the first place, revealing that he had been "inhabiting Catelyn for so long" that it was hard to let her go. He was also inspired by his recollection of reading Lord of the Rings as a child, and being disappointed by the depiction of Gandalf coming back from the dead. The argument Martin would like to make to J.R.R. Tolkien is that "if someone comes back from being dead, especially if they suffer a violent, traumatic death, they’re not going to come back as nice as ever." The character of Lady Stoneheart might look just like Catelyn Stark — but Catelyn's horrific death at the Red Wedding has turned her into somebody completely new.

So we won't be seeing Lady Stoneheart on Game of Thrones, but as far as the books are concerned, anything could happen in her storylines. Winds of Winter cannot come fast enough.