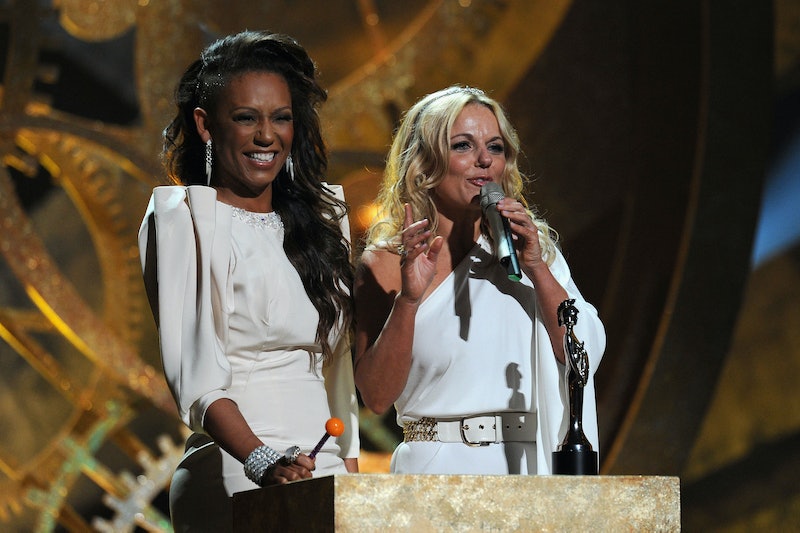 Give thanks to Ginger Spice, because she oh-so generously gifted the Spice World with a very special picture on Scary Spice's day of birth. On Tuesday, May 29, Melanie Brown celebrated her 43rd birthday. And on that day, a throwback photo of Geri Horner and Mel B popped up on Horner's Instagram page. The "Look At Me" singer posted a pic she took with her former bandmate and forever pal before the Spice Girls became a worldwide phenomenon, and the image will without a doubt plop every fan's heart on a double-decker bus headed straight to Nostalgiaville.

Horner wrote in the photo caption,

“Happy birthday @officialmelb ! This was taken just before we had any success ,when Mel lived with @melaniecmusic across the road from my mums house. #funtimes.”

Assuming “just before we had any success” means “just before we released our debut single and it promptly crushed the charts,” this photo was probably snapped at some point before the summer of 1996. If you haven't had your daily dose of nostalgia already, this picture's got you covered. The shoes, Horner's minidress, Mel B's vest and sweatpants combo, the "We're standing at the precipice of superstardom" look in their eyes — everything about this picture is perfect.

In 1994, a British newspaper ran an ad that would eventually spice up the pop music landscape's life forever. As Horner wrote in an essay for Marie Claire in 2016,

“I was 22 years old, trying to make ends meet by juggling various side gigs—at one point, I was working five jobs a week: two housekeeping assignments, bartending, babysitting, teaching aerobics at a local gym—to fund studio sessions to record an album, when I came across an ad in a trade newspaper called The Stage looking for 'streetwise' girls to audition for a pop band.”

After few rounds of auditions, an adjustment to the lineup, and a name change, the Spice Girls were born. Horner recalled in her aforementioned Marie Claire essay,

“And so, just like that, we were a band: Emma, Mel B, Melanie C, Victoria, and myself. Roommates, too. Five girls living together in a small three-bedroom house in Maidenhead, just outside London, was lots of fun, albeit at times tricky.”

The quintet released “Wannabe” in the UK in July 1996, and the track was an inescapable and unstoppable hit. The song did not hit the US until 1997, but when it did, it wasted no time in conquering the Billboard Hot 100.

The Spice Girls released two hit albums, made a severely underrated movie, and inspired a merchandise empire. But in May 1998, the pop world was knocked right out of its platform shoes when Horner decided to split from the group and pursue a solo career. Scary Spice told Larry King in 2014,

Mel B told King that some bitterness did linger between her and Horner for a while, but the two Spices eventually made amends. However, Scary Spice did add that she still likes to tease Horner about quitting the band on her day of birth. Hey, what are friends for if not to gently rib one another about leaving one of the biggest pop acts of all time on one group member's birthday?

This sure came full circle, didn't it? Two decades after Horner left the Spice Girls on Mel B's birthday, she wished Mel B a happy birthday with a throwback Spice Girls pic. All these years (and lots of group drama) later, and Ginger Spice and Scary Spice are still buddies. Oh, if only there was a Spice Girls lyric about friendship never ending.