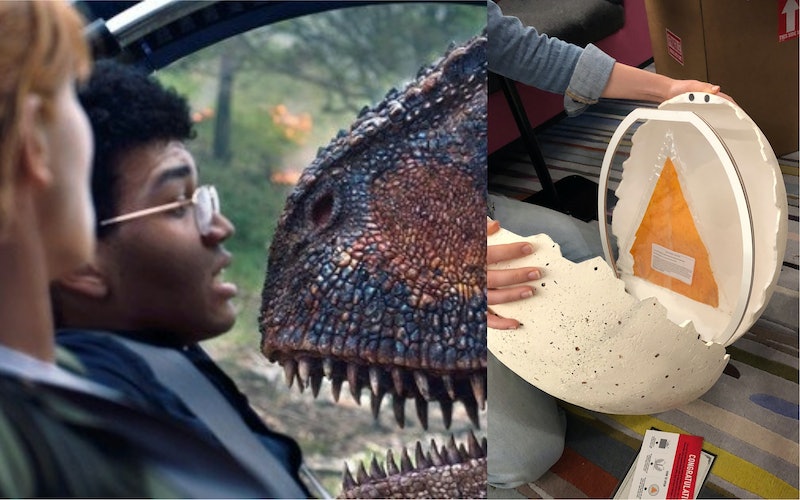 I have seen a lot — a lot — of ridiculous promotional efforts in my time. This one, though? This one is truly something special: Frito-Lay has unleashed a giant Dorito on the world in honor of the release of Jurassic World: Fallen Kingdom. (It comes out on June 22, in case you’ve lost track of this summer’s blockbuster movie release date schedule.) It is, one might say, a dinosaur-sized Dorito… which is actually more accurate than you might think: The massive chip actually has a backstory that fits within the larger Jurassic Park mythos — and it involves dino DNA. And yes, there is a way for you to get your hands on one… although it certainly won’t be easy.

According to a short video starring BD Wong as Dr. Henry Wu, the giant snack is the result of an experiment Dr. Wu has carried out involving dinos and Doritos. Dr. Wu did actually appear briefly in the original Jurassic Park movie (and he had a much more prominent role in Michael Crichton’s novel before that), but it was in Jurassic World that he took center stage; he’s back for Fallen Kingdom, too, apparently, so we’ve only got a few short days left before we find out what he’s been up to since then. Clearly, though, his between-movie antics have included splicing together dinosaur DNA with Doritos… uh… well, probably not DNA; I don’t really think Doritos have DNA. But whatever — Dr. Wu has managed to cross a Dorito with a dinosaur, the result being a massive chip that actually hatches out of an egg.

The video is a absurd, but it is also kind of hilarious, largely because BD Wong is wonderful:

The Dorito in question measures around 10 inches in height, according to Food and Wine; the long sides clock in at about 11 inches, while the short side measures around 10.25 inches. It’s the same thickness Doritos always are — and for the curious, yes, it is a particular flavor: The gigantic snack is a classic Nacho Cheese chip. It comes in its very own egg, which has been carefully packed in a replica prop crate from Fallen Kingdom.

However, these images, as lovely as they are, don’t really communicate the scale of the thing. Luckily, though, Bustle HQ managed to acquire one, so here are some photos of what the crate, egg, and chip look like in real life:

The crate is about knee-high on an adult human, with the egg and chip being slightly smaller, yet no less impressive.

And just for kicks, here's a comparison shot of the Dino-rito versus a regular Dorito:

If you would like one of these prehistoric chips to call your own, though, you’ll have to be either very lucky, or very wealthy. There is, of course, a limited number of them available, and they can only be acquired in two ways. If you’re feeling lucky, you can tweet @Doritos using the hashtags #JurassicDoritos and #entry (make sure you use both!) in order to enter a drawing to win one; or, you can go to JurassicDoritos.com and bid on one. The domain redirects to an eBay auction which runs until June 20; there, the truly dedicated can lay down their hard-earned dollars in exchange for a foot-tall Dorito — as long as they’re willing to outbid everyone else. As of this writing, there are 22 bids already in, the highest of which is a whopping $710.

I won’t lie: The moment I saw that number, all I could think was, “WHO ON EARTH HAS $700 JUST LYING AROUND THEY CAN USE TO BUY A GIANT DORITO?!” I mean, if that person is you, then more power to you; I just… can’t really fathom having that kind of disposable income.

On a more serious note, though, the good news is that fully 100 percent of the winning bid will go towards relief efforts spearheaded by the American Red Cross in Hawaii to help those affected by the Mount Kilauea eruption. The eruption has been going on for nearly a month and a half; it first started on May 3, and it’s still ongoing. As of this week, it’s estimated that 700 homes have been destroyed by lava flowing from the volcano, according to USA Today — and there’s no sign of it letting up anytime soon.

The Jurassic Park franchise has filmed sequences in Hawaii since the very first movie. Most of the shooting locations used have been on the island of Kaua’i, but a few have been on Oahu and on the island of Hawaii (also known as the Big Island). Kilauea is on the Big Island, so that’s where the damage has been concentrated during the eruption. I do appreciate that the franchise is using this opportunity to give back to the place they’ve spent so much time shooting at over the past 25 years — and if you happen to be the person who makes the winning bid, good on you for donating to the cause.

Good luck, my friends. May you never, ever be eaten by a Tyrannosaurus Rex while you’re in a compromising position.