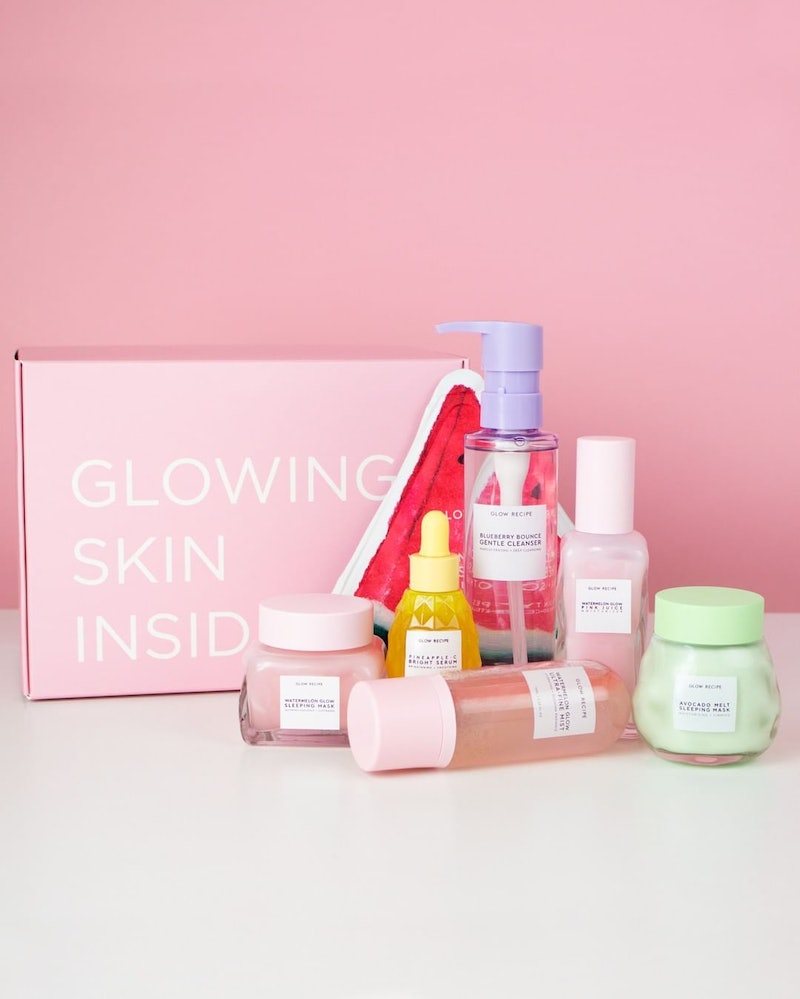 Fans of Korean Beauty, get ready because you're about to have the best Fourth of July ever. While K-beauty and Independence Day may not seem like they have a lot in common, this year they do because Glow Recipe's entire line is on sale for the occasion. Honestly, this sale is a total steal.

According to the Glow Recipe Instagram account, the brand is hosting a special deal for the Fourth of July, and it's major. For the holiday, Glow Recipe's entire skin care line is being offered in a bundle that's discounted by a massive 25%. That's right, you can get every product in the Glow Recipe range for 25% off the original price. Pretty sweet, huh?

The brand's Glowing Skin Inside Collection features all seven of its product launches since its inception, and with all of the items combined, the retail value comes to just shy of $250. Now, thanks to the Fourth of July special from Glow Recipe, you can snag the line for just $186. Yes, that's less than $200 for a brand's full gamut of goodies.

There is only one catch to this sale, and it's that you need to shop quickly. Quantities of the Glowing Skin Inside Collection are limited, and with the cost now under $200, it's sure to go fast.

If you want to shop the set, all you need to do is head to the Glow Recipe website. There, you'll find the bundle and can add it to your cart. Once done, head to the checkout and add code JULYFOURTH. Boom! You've got 25% off the collection and are snagging a brand's entire range for less than $200.

If you're not familiar with Glow Recipe's name, you may still have heard of their products. Originally, Glow Recipe, founded by Christine Chang and Sarah Lee, was a K-beauty curation site, meaning that Chang and Lee took new Korean beauty products and specially curated the best of the best for shoppers.

Fast forward to 2017, and Glow Recipe launched its own brand. In May of that year, Glow Recipe debuted its Watermelon Sleeping Mask and Blueberry Bounce Cleanser. Why might those items sound familiar to you, though? Well, according to Glamour, the Watermelon Glow Sleeping Mask had a 5,000 person waiting list before it even launched. Eventually, that number grew to a whopping 20,000 patiently waiting to get their hands on it.

Now, Glow Recipe has grown so popular that the brand has decided to end its curations. For fans of the K-beauty brand and website, this means that Glow Recipe will no longer be bringing shoppers recommendation on other k-beauty brands. Don't be upset, though. The reason why curations are ending is so that the founders and their team can focus on creating more incredible products for fans. While you may not be able to shop the site for other brands, get ready for more Glow Recipe coming at you.

Until the brand decides to launch new products, though, there's always its Glowing Skin Inside Kit. With every item in the brand's lineup included in the bundle and its cost at less than $200 in a bundle thanks to the Fourth of July promotion, this is one deal you can't pass up.

More like this
TikTokers With Eczema Are Opening Up About Topical Steroid Withdrawal
By Kui Mwai
The Universal Appeal Of Maison Francis Kurkdjian Baccarat Rouge 540
By Audrey Noble
Olaplex's New Shampoo Is Here To Save Your Dull Summer Strands
By Audrey Noble
The Best Of June's Beauty Launches, According To Our Editors
By Bustle Editors
Get Even More From Bustle — Sign Up For The Newsletter