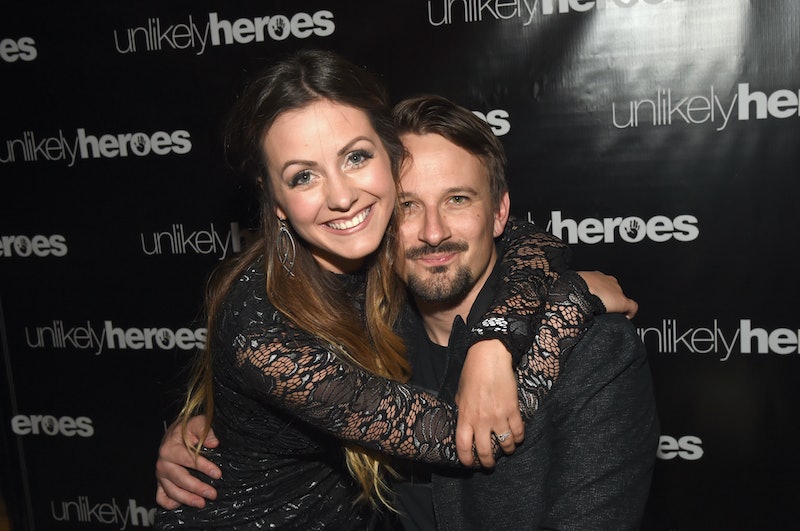 Amid a tumultuous few weeks in Bachelor Nation, there was at least one bright spot: Bachelor In Paradise couple Carly Waddell and Evan Bass officially tied the knot. And for those who haven't yet regaled themselves with all of the finer points, the Carly and Evan wedding details are appropriately Bachelor-centric.

As reported by People, they exchanged vows during an intimate beach ceremony in Puerto Vallarta, Mexico — near the village of Sayulita, where they met while filming Bachelor In Paradise Season 3. The pair weren't initially a surefire match — Evan liked Carly, but she was hesitant at first — but then Evan faked an injury, and Carly realized she was actually harboring some pretty strong feelings for him. By the time the show wrapped, they were very much in love, and Evan proposed. They've since moved in together in Nashville, where they live with Evan's three sons: Nathan, Liam, and Ensley.

Bachelor Nation doesn't always have the best track record when it comes to finding love that lasts, but Carly and Evan managed to beat the odds and make it to the altar. Their wedding will air as a special episode during the recently resumed BiP Season 4, but until then, you catch up with the behind-the-scenes specifics below.

Chris Harrison helped bring Carly and Evan together, so it's only fitting that the franchise host led their nuptials.

There Was A Beautiful Oceanside View

According to Carly's Instagram, "the setting, in a garden overlooking the ocean, created a stunning visual that I don't think anyone will forget." She also tagged the Grand Luxxe at Vidanta Nuevo Vallarta, which, from the looks of it, is quite breathtaking.

Bachelor Nation Was There In Full Force

Carly's Dress Was Straight From The Runway

Carly wore a strapless fit-and-flare nude gown with white floral embroidery from Israeli designer Idan Cohen. According to People, it originally debuted on the runway as the “Mercedes” dress during Cohen's 2017 bridal fashion show, where it was styled with a lace shoulder wrap, but Carly opted to keep her arms bare.

Carly wrote on Instagram that Evan's three children, "delivered heartfelt and hysterical speeches that had everyone laughing and crying simultaneously."

The air date of Evan and Carly's wedding has yet to be announced, but when it finally makes it to screen, it looks like it will be a blissful, celebratory, and stunning affair.