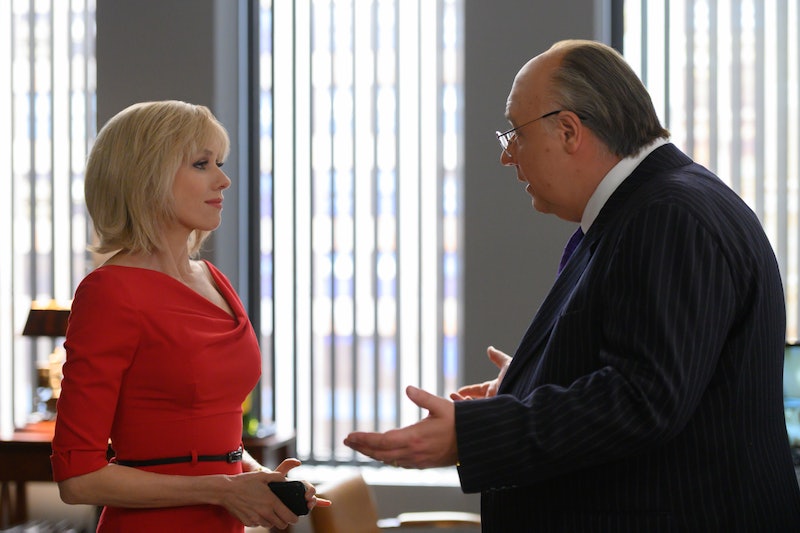 After years of working at Fox News and dealing with sexual harassment, Gretchen Carlson decided to take matters into her own hands in the "2012" episode of The Loudest Voice. Carlson recording Roger Ailes on The Loudest Voice was something that happened in real life and ended up playing a part in her 2016 lawsuit against the Fox News president. The final two episodes — "2015" and "2016" — will show just how Carlson used these recordings to settle her lawsuit against Ailes for $20 million. Because even though The Loudest Voice has some taken some liberties with the truth for dramatic effect throughout the series, Carlson truly did document the inappropriate conduct by Ailes toward her.

The revelation that Carlson had recorded Ailes was broken by Gabriel Sherman in his New York magazine article about the Fox CEO's downfall. The Loudest Voice is based on Sherman's articles and the book of the same name (plus, he has written a couple of episodes), and so the journalist was introduced as a character in "2012." In his article following Ailes' resignation from Fox News, Sherman reported that more than two dozen women had come forward with claims of sexual harassment perpetrated by the Fox boss.

He noted how it was Carlson's lawsuit that was the catalyst for these women coming forward and ending Ailes' Fox career. And her lawsuit included the information she obtained from her recordings.

As Sherman reported based on interviews with "a person familiar with the lawsuit," Carlson secretly began recording her meetings with Ailes in his office on her iPhone in 2014. Sherman used two quotes from Ailes in his article to highlight the type of harassment that Carlson was experiencing in the workplace. "I think you and I should have had a sexual relationship a long time ago, and then you'd be good and better and I'd be good and better. Sometimes problems are easier to solve [that way]," Ailes reportedly told Carlson one time. On another occasion, Ailes said to The Real Story with Gretchen Carlson host, "I'm sure you can do sweet nothings when you want to."

While these quotes display harassment, they aren't as explicit as what was shown in The Loudest Voice. In "2012," Russell Crowe's Ailes tells Naomi Watt's Carlson, "I can't help it. That ass of yours, it's a hand magnet." So what is highlighted in the Showtime miniseries aren't direct quotes from Ailes. But Carlson's lawsuit did call out other misogynistic and inappropriate comments made by Ailes to her. The lawsuit claimed that Ailes called Carlson a "man hater," who tried to "show up the boys" — as in her male cohosts on Fox & Friends. It also alleged that Ailes called her "sexy" but said she was "too much hard work."

Along with these quotes, the lawsuit claimed that Ailes repeatedly commented on her legs and had asked her to turn around while in his office for the purposes of "ogling" her posterior. According to the lawsuit, Ailes retaliated against her when she refused "to engage in a sexual relationship or participate in sexual banter." As the suit said, he reduced her compensation, limited her opportunities, and eventually fired her from Fox.

Aug. 4's episode, "2015," will show Carlson working with employment attorney Nancy Erika Smith to build her case against Ailes using the recordings. Sherman's article noted that Smith and Carlson connected after more than a year of secret recordings. Sherman reported that they were introduced to one another by Carlson's husband — sports agent Casey Close's — own lawyer, Martin Hyman.

As Carlson herself tweeted ahead of the "2012" episode, not everything in The Loudest Voice is 100 percent accurate. She wrote how it's important to "point out that my settlement precluded me and my family from participating in the project, so as you might imagine there will always be liberties with the storyline." She directed her followers to read a Vulture article on the subject, which noted that one discrepancy between The Loudest Voice and real life was that Carlson always had the support of her husband Close. (On the series, Josh Charles' version of Close tells her to go along with Ailes' behavior for the sake of her career.)

Despite the artistic liberties The Loudest Voice has taken, Carlson also tweeted, "My hope has been that the show will continue the dialogue about what workplace harassment looks like, the toll it takes on so many of us, and how hard it is to fight it." And just how hard Carlson fought to build a case against her powerful employer will come to a head in the final two episodes of The Loudest Voice.

More like this
UK Viewers Will Have To Wait To Watch The Handmaid’s Tale S5
By Maxine Harrison
'Elite' Season 6 Is Arriving Sooner Than You Think
By Gretchen Smail and Grace Wehniainen
What’s New On Netflix: Ana De Armas’ 'Blonde' & A Nick Kroll Special
By Arya Roshanian
The 'Reasonable Doubt' Cast Includes A 'Save The Last Dance' Reunion
By Grace Wehniainen
Get Even More From Bustle — Sign Up For The Newsletter