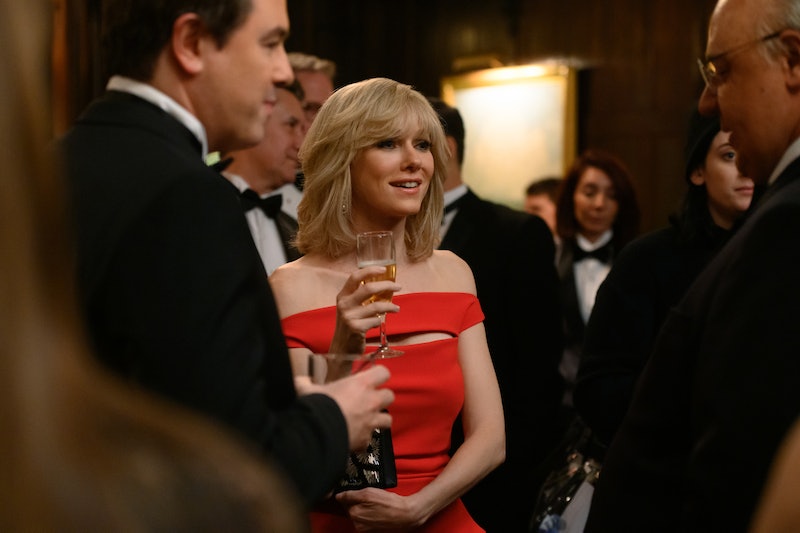 The Loudest Voice has already shown the early days of Fox News, but the third episode will jump to Gretchen Carlson's time at the Roger Ailes-run network. Naomi Watts plays Carlson on The Loudest Voice, but kind of like Sienna Miller, you might not entirely recognize the Oscar-nominated actress with her full mane of blonde hair. Watts is joining the miniseries a little later than some other major Fox News Channel players, but as you'll see on the Showtime series, Carlson ends up being majorly influential in ending Ailes' career with the network. And getting other women to come forward about his inappropriate sexual conduct.

Fox News is known for having its bevy of blondes and according to The Loudest Voice, that was because Ailes wanted women he found attractive on air. The July 14 episode "2008" will show how Carlson left CBS News to come over to Fox in 2005. She became a host of Fox & Friends and later went on to have her own show The Real Story with Gretchen Carlson. But in July 2016, The New York Times reported that Carlson filed a harassment lawsuit against Ailes. She accused him of reportedly forcing her off the network the month after she denied his sexual advances. Besides a reported direct sexual proposition, Carlson alleged that there was sexual harassment in the newsroom and discrimination toward women.

Ailes denied Carlson's allegations, saying in a statement, "This is a retaliatory suit for the network's decision not to renew her contract." He added, "This defamatory lawsuit is not only offensive, it is wholly without merit and will be defended vigorously."

Yet, Carlson's lawsuit was a game changer. Other women, including fellow Fox host Megyn Kelly, came forward with their own allegations of sexual harassment perpetrated by Ailes. Just a couple weeks after Carlson's lawsuit, Ailes resigned from Fox News. Vanity Fair reported that by September 2016, Fox settled with Carlson for $20 million and offered a public apology to her. "We sincerely regret and apologize for the fact that Gretchen was not treated with the respect and dignity that she and all of our colleagues deserve," Fox's statement read. Although chairman of Fox, Rupert Murdoch, did not support the women who claimed sexual harassment at Fox News — and Carlson called him out on Twitter in 2017.

Carlson spoke to HuffPost about how her settlement agreement with Fox meant that she wasn't able to give her insight to The Loudest Voice. "I can't take part in any of these projects, so I just hope for accuracy, because in watching what I've seen thus far, it's an incredibly emotional experience for me. When you experience [harassment and assault], you go through a certain recovery process, and there's a sense of PTSD that can affect [you] for life," she said. "In talking more about this issue and showing miniseries like The Loudest Voice, we are able to help people get past that."

Although she couldn't directly share her side of the story with production, the journalist praised Watts for the research she did for her portrayal. "I've been so grateful to listen to her [speak about the show] because she's really researched me, she's read my books, she wanted to get the story right, and she has great empathy for the courage that it takes [to come forward]," Carlson told HuffPost.

When asked what she wants people to take away from the miniseries, Watts told The Hollywood Reporter, "Well, in terms of Gretchen, I think it's an incredibly powerful story in that there are many people who could have been taken down by this level of power, and just to survive in a place that was that misogynistic is incredible. It's also an incredibly encouraging story that she was able to come out with dignity and grace." She added, "But to me, it just felt so relevant, and to play a woman who's gone through something as horrific as this and to come out on top? It’s quite liberating as an actor to play that kind of role. It feels really juicy and vindicating as well. And again, it speaks to what we're going through currently. I mean, she really was the first."

Ailes died in May 2017 and continued to deny the accusations against him. Yet, The Loudest Voice is putting on display the type of behavior that so many women claimed happened to them at Fox News — and that's in large part due to Carlson speaking up and sharing her truth.

More like this
Man Meets Politics: ‘Boy Meets World’ Star Ben Savage Is Running For Congress
By Jake Viswanath
At 28, Rosie Perez Risked Her Career To Stop Playing Stereotypes
By Gabrielle Bondi
'The Crown' Season 6 Has Suspended Filming "Out Of Respect" For The Queen's Death
By Bustle Staff
Here’s Everything Coming To & Leaving Netflix In February
By Jake Viswanath
Get Even More From Bustle — Sign Up For The Newsletter
From hair trends to relationship advice, our daily newsletter has everything you need to sound like a person who’s on TikTok, even if you aren’t.