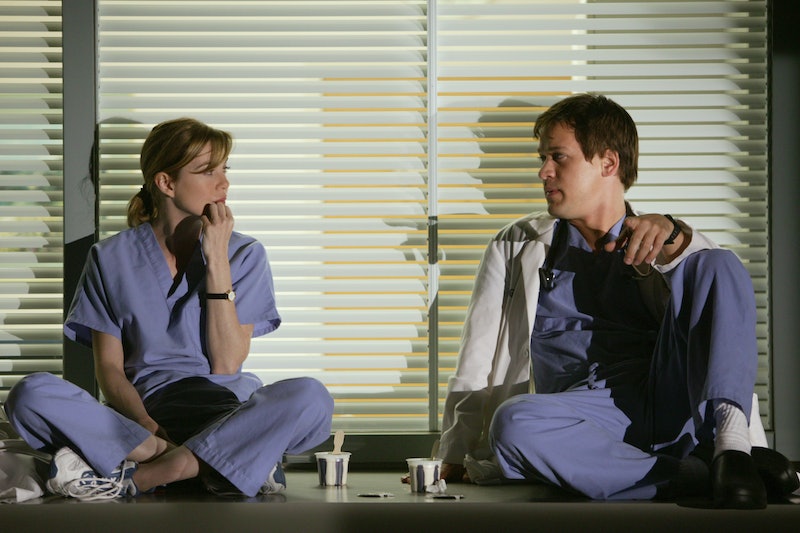 Meredith and George are together again. Grey's Anatomy's Ellen Pompeo reunited with T.R. Knight on March 6 — just one day after the ABC medical drama gave an emotional goodbye to Alex Karev (Justin Chambers). "Old friends are the BEST friends @t.r.knight... but like we aren't old... we've just known each other for a very long time yes yes that's it...." Pompeo captioned an Instagram photo of the nostalgic outing, which included a lunch date at Los Angeles eatery Joan's on Third.

For his part, Knight shared his former costar's post, replying, "I'm just happy we met when we were fetuses," along with a red heart emoji. Grey's executive producer Debbie Allen (aka Catherine Fox) also commented on Pompeo's post with "and they last," adding three heart emojis of her own.

Along with Pompeo and Chambers, the actor who played George O'Malley was one of the original Grey Sloan (then-Seattle Grace) interns during the first five seasons of Grey's. He was only the second OG cast member to depart the series (Isaiah Washington was the first) following his character's tragic end in 2009. Even so, he and Pompeo seem to have remained as close off screen as they were on the show.

Knight's O'Malley has popped up in flashbacks on Grey's over the years, including in March 5's "Leave a Light On" episode in which the show finally revealed what happened to Karev. (Chambers announced his abrupt departure on Jan. 10.) As viewers now know, Alex left Seattle and got back together with Izzie after discovering she had shockingly been raising their now five-year-old twins in Kansas.

After the episode aired, Pompeo reacted to Karev's fate in a March 6 Instagram post, calling it "the best send off" for her fellow 16-season vet. "For me personally for Karev to go back to the beginning.... was the best possible storyline," she captioned the montage of classic Meredith and Alex Grey's clips. "It pays homage to those incredible first years and the incredible cast ...that created a foundation so strong that the show is still standing."

As for fans who may still be drying their tears after saying goodbye to Alex, she had this advice: "dance it out." The same day, Pompeo shared a video of Ariana Grande performing "Be Alright" and thanked the singer "for the bangers" she's released in her career. (Grande replied, "love you so much," by the way.) As Pompeo wrote: "We're gonna be alright . . . we literally have to dance it out now. It's the Greys way...."

Pompeo agreed in January that Chambers leaving Grey's was one of the show's biggest losses yet. As viewers continue to reel from Alex's farewell, at least they have the comfort of seeing her and Knight have the OG reunion fans need to help them cope for now. Apparently there is life after Grey's.

More like this
'Friends' Star Maggie Wheeler Offers Support To Matthew Perry After Reading His Memoir
By Alyssa Lapid
Anne Hathaway Shared A "Thrilling" 'Princess Diaries 3' Update
By Darshita Goyal
The 'Scream 6' Trailer Shows Off Hayden Panettiere's Return & Ghostface In NYC
By Jack Irvin and Jake Viswanath
This 'Gossip Girl' Wardrobe Error Has Gone Viral On TikTok
By Alyssa Lapid
Get Even More From Bustle — Sign Up For The Newsletter
From hair trends to relationship advice, our daily newsletter has everything you need to sound like a person who’s on TikTok, even if you aren’t.