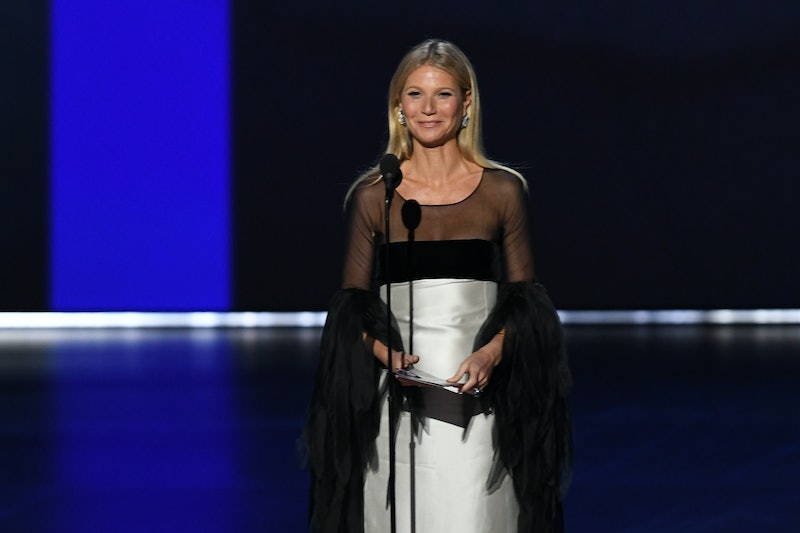 On the Wednesday, Oct. 2 episode of Jimmy Kimmel Live!, Gwyneth Paltrow explained why she forgot she was in Spider-Man: Homecoming until Jon Favreau brought it to her attention. When Jimmy Kimmel asked Paltrow about that episode of The Chef Show where she was made aware of the part she played in Homecoming, she replied, “I just got confused. There’s so many of these wonderful Marvel interconnecting movies, and I thought that it was an Avengers movie, but it was not.”

The Marvel Cinematic Universe is vast, and it can be tricky to keep all of the movies and the timeline straight. Moreover, as Captain Marvel star Brie Larson explained on The Tonight Show Starring Jimmy Fallon in April, sometimes the MCU actors are kept in the dark about what they are filming to help maintain the series' secrecy. There are a lot of factors in play.

It probably also does not help that Paltrow apparently has not watched the Spider-Man movie for which she filmed a scene. “I never actually saw the movie,” she admitted to Kimmel on the show, before asking the late-night talk show to “cut that out.”

As they prepared pepper pot soup on the first episode of The Chef Show Season 1, Favreau mentioned he and Paltrow were in Spider-Man: Homecoming together. Paltrow pushed back. “We weren’t in Spider-Man. No, I was in Avengers,” she said. Favreau referenced the scene where Pepper Potts, Happy Hogan, and Tony Stark talk about Peter Parker and his press conference, assuring her they filmed that scene with Robert Downey, Jr. for Spider-Man: Homecoming. "That was Spider-Man?" she asked. Shortly after this episode of Choi and Favreau's cooking show hit Netflix's library back in June, Paltrow's "That was Spider-Man?" moment went viral.

A few weeks after The Chef Show debuted, Pop Sugar shared a video of a trivia game featuring Spider-Man stars Tom Holland, Zendaya, and Jacob Batalon. In that video, the actor who played Spider-Man in Homecoming and Far From Home addressed Paltrow's "That was Spider-Man?" moment.

"I've only worked with Gwyneth one time, on Spider-Man: Homecoming, which she doesn't remember. Breaks my heart," Holland joked in the PopSugar video, before realizing that he has worked with her more than once. He continued, "Actually, no, that's not true. One time time when we were shooting... Avengers: Endgame. She was in her blue suit and I was in my Spider-Man suit and she came up and she asked me for a photo with me and Robert [Downey Jr.]. And then I think she posted it and she said, 'Robert Downey Jr., myself and this guy.' I was just the 'guy.'"

May Paltrow never stop talking about how she had no idea she was in one of the biggest movies of 2017.

More like this
Chris Hemsworth Joked That Baring His Butt In ‘Thor: Love And Thunder’ Was A “Dream”
By Brad Witter
What Does The Presley Family Think Of 'Elvis'?
By Arya Roshanian
Photos Of The 'Elvis' Cast vs. Their IRL Counterparts Will Have You All Shook Up
By Grace Wehniainen
Taylor Swift's “Carolina” Theme For 'Where The Crawdads Sing' Soundtrack Is Here
By Jake Viswanath
Get Even More From Bustle — Sign Up For The Newsletter