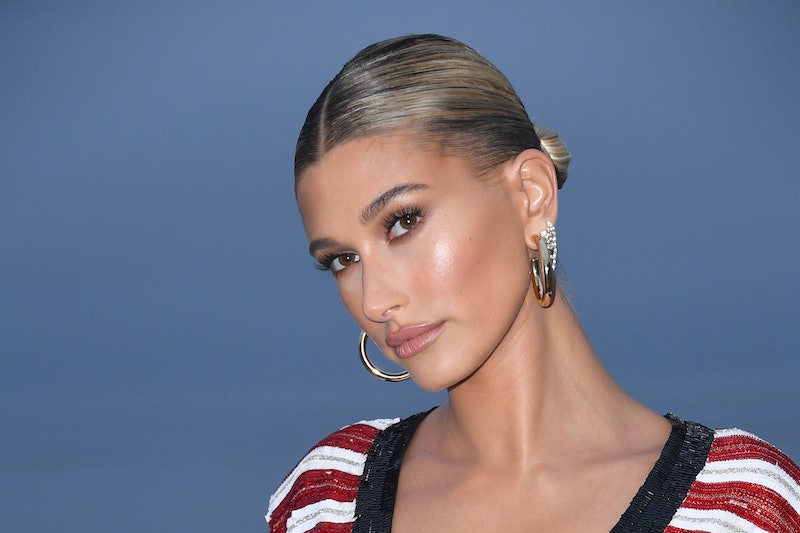 The new Mrs. Bieber is hoping that everyone can be a little kinder in 2020. In an emotional Instagram post to celebrate the new year, Hailey Baldwin opened up about "being torn apart online" and reflected on the toxic side of Internet culture and the very real impact that it has on the people behind the screens. The model shared her thoughts on Friday, Jan. 3, alongside an image from her tropical New Year's vacation with husband Justin Bieber, writing that "my most favorite part of existing is human connection."

"I absolutely love connecting with other people, I love finding common interests between me and others, hearing people’s story ... I feel so very very deeply," Hailey began her post, before adding that because she "love[s] freely and ... empathize[s] deeply," she is often hurt by people who "don’t see my heart and see me for who I am." Sharing some of her own experiences being "torn apart" by Internet commenters and trolls, the model explained, "It hurts to be compared to other human beings every single day, it hurts for people to jump to conclusions and make assumptions."

"It hurts to be called names, and to feel like you don’t measure up to a certain standard.. the list goes on and on," Hailey said, noting, "I share this only because it weighs often on my heart and because it’s important to be honest about how these things affect us mentally and emotionally."

In addition to opening up about how the "toxicity" of the Internet has taken a toll on her well-being, Hailey also explained that she wants other people to think about the impact that social media has had on empowering people to attack others online. "Instagram, Twitter etc is SUCH a breeding ground for cruelty towards each other," Bieber wrote.

"Because people don’t take the time to connect with each other on an honest level before they resort to hatred, it starts to damage what could be really beautiful human interaction and connection," she continued. By contrast, she encouraged her own followers to "connect more" in 2020 and think about the people behind the screen.

This is not the first time that the model has taken a stand against what she views as "toxic" Internet culture. As Hailey explained in a December interview with Vogue UK, she feels celebrities and influencers — including herself — have a responsibility to call out negative behavior online. "There needs to be more people with platforms coming together and saying to each other, ‘let’s kill the conversation, let’s kill the fake drama, let’s squash all these things, let’s move on from stuff,'" the model said. "Let’s not give people a reason to fuel fire and create drama and being rude to each other."

Hailey's passion for fostering a kinder online environment is even more personal, as she has spoken about the effect that Internet trolls had on her very public relationship. Reflecting on her first year of marriage to Justin, Hailey told Vogue Australia that it was difficult navigating their relationship in front of "a zillion people who had a zillion opinions," but that they ultimately "found a rhythm" that worked for them. And now that they have found success by tuning out the negative attention, it's clear that Bieber is hoping to encourage others to be kinder and more thoughtful in the new decade.

More like this
Miss Thailand's Soda Tab Gown At The Miss Universe Pageant Had A Special Meaning
By Brad Witter
Why We Love Investigating Friendship Breakups
By Carolyn Steber
Hailey Bieber Went Pantsless In A Hoodie By Justin's Brand Drew House
By Dominique Norman
Twitter Is In Awe Of Taylor Swift’s “Lavender Haze” Music Video
By Jake Viswanath
Get Even More From Bustle — Sign Up For The Newsletter
From hair trends to relationship advice, our daily newsletter has everything you need to sound like a person who’s on TikTok, even if you aren’t.