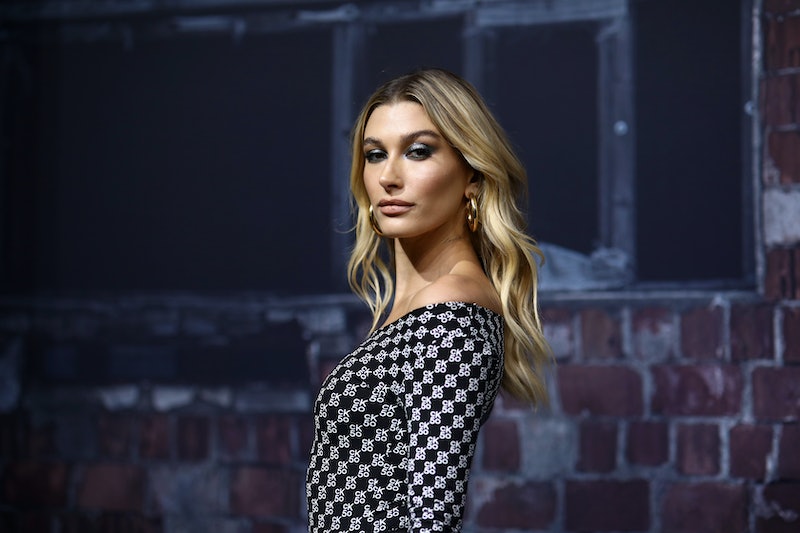 Just because they're newlyweds, that doesn't mean that the Biebers are ready to become parents just yet. On Friday, Nov. 29, Hailey Bieber shut down pregnancy rumors on her Instagram Story, joking that it was "funny" that the Internet thought she was expecting simply because she was photographed touching her stomach. According to E! News, the model and husband Justin Bieber were photographed during a recent trip to Miami, where they lounged by the pool and enjoyed a relaxing meal together.

However, after the pair were spotted walking around the city, with Hailey touching her stomach, rumors that the Biebers were expecting a new addition began swirling on social media, which she quickly refuted. "The internet is funny!!" Hailey wrote on her Instagram Story on Friday. "No, I'm not pregnant I just really love food."

The pregnancy rumors come just one week after Justin declared that he couldn't wait to have "babies" with his new wife in an Instagram post celebrating Hailey's 23rd birthday. "Happy birthday babes!" the singer wrote, alongside some photos of Hailey from their wedding in September. "The way you live you life is so attractive.. ps you turn me on in every way," adding, "Next season BABIES."

Hailey's birthday was far from the first time that Justin has shared his desire to become a father; back in July, he shared a photo of himself and Hailey enjoying a trip to Disney World on Instagram, writing that he could envision having "daddy-daughter dates" there in the future. "Love dates with you baby.." the singer wrote. "One day Ill be doing daddy daughter dates." However, Justin also added at the time that he was "not hinting at anything soon, I’m not in a rush. i just wanna enjoy you by yourself for a while!"

It seems like Hailey is also interested in simply enjoying married life for a little while, as she told Vogue Arabia in November 2018 that she and Justin aren't planning to have children "any time soon." She told the outlet, "I love kids and I can’t wait to have my own. I would say now that’s a closer reality," referencing the pair's secret wedding in September 2018.

While Hailey told Vogue shortly after she and Justin tied the knot that marriage was "hard," and that they were "working" in order to make sure that their relationship was built on a firm foundation, a year later, she revealed that the pair were much happier.

"I said [marriage was hard] when we had first married," she told Vogue Australia. "Specifically, I said that when there were a lot of new things. I had never lived with someone before. I never had to cohabit with somebody in that way, so I was learning how to share space with someone for the first time."

She continued, "Now it’s easier, because we’ve found a rhythm. We have more fun together, which is what should happen when you spend more time with someone you love." While baby Biebers are certainly not out of the question for the happy couple, it's clear that both Justin and Hailey are enjoying just having fun with one another right now, and aren't planning to rush into parenthood.