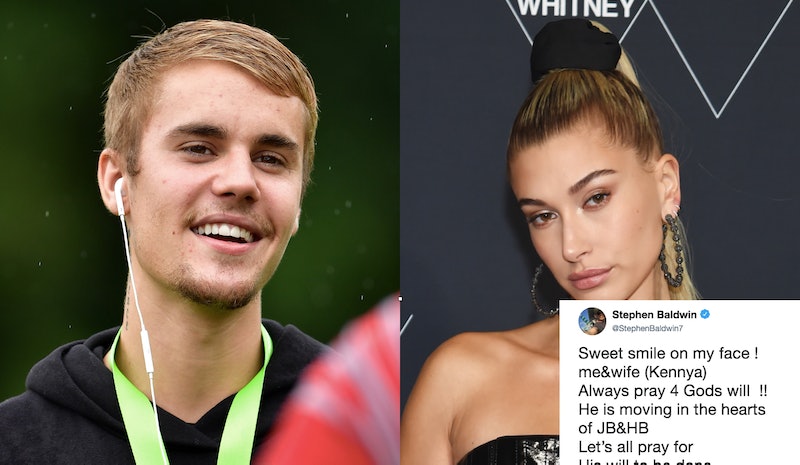 After rumors spread on Sunday that Justin Bieber and Hailey Baldwin got engaged over the weekend, the news may now be official. Baldwin's dad, Stephen, confirmed her engagement to Bieber with a heartfelt tweet — or at least it sure seemed like it. He even included a verse from the Bible. But soon after posting the message, it appears that Stephen deleted the tweet. (Bustle reached out to reps for Bieber and Baldwin about the engagement reports, but did not receive an immediate response.)

EARLIER: The 52-year-old actor had tweeted:

"Sweet smile on my face ! me&wife (Kennya) Always pray 4 Gods will !! He is moving in the hearts of JB&HB Let’s all pray for His will to be done Love you 2 so much !!! #Godstiming #bestisyettocome Congrats"

Stephen also tagged his future in-laws, aka Bieber's parents Jeremy Bieber and Pattie Mallette, in the since-deleted post. He also threw in prayer hand emojis and a heart. It's currently unclear why he removed the post. (Bustle reached out to Stephen's rep for comment, but did not receive an immediate response.)

The Bible verse included in the tweet focused on the idea of marriage. It's from Ephesians and reads:

While Stephen deleted the above tweet, there's another one that hints at the engagement that's still up on his page. Earlier on Sunday, the Bio-Dome star posted the following message, which also quotes a Bible verse:

Of course, the timing could just be a coincidence, but the "#blessed" echoes the same theme as the other tweet — that he's expressing gratitude. And if that's the case, it's sweet to see that Baldwin has the support of her family, regarding reportedly taking this next major step with Bieber.

For the record, Baldwin's dad isn't the only parent who may have confirmed the big news via social media. Bieber's father Jeremy posted a celebratory photo of his son that was believed to be about the proposal that, according to TMZ, took place in the Bahamas on Saturday. Jeremy wrote, "@justinbieber Proud is an understatement! Excited for the next chapter!"

Meanwhile, Biebs' mom, Pattie Mallette, tweeted on Saturday a simple message, "Love Love Love Love Love Love Love." Again, it's vague enough to not necessarily be explicit confirmation, but love sure seems to be in the air for the Bieber and Baldwin families at this time, and if the reports are to be believed, it's no surprise why.

Despite their seemingly proud parents, neither Baldwin nor Bieber has posted an update yet about the supposed milestone. However, according to E! News, the singer's proposal sounds super sweet. A source claimed to E! News,

"They are engaged and it happened Saturday night in front of a crowd in Baker's Bay. Justin made arrangements for the ring when they were in NYC and knew that he wanted to propose to her. It was a sudden decision but Justin always knew Hailey and him had a special bond that was incomparable."

Apparently, Baldwin was reportedly caught "off guard," according to E! News, so if you're a fan that's reeling from the news, you likely aren't the only one. Their source also said, "Her face was in shock but you could tell they are both so in love."

Even if the news may come as a surprise to fans, Baldwin and Bieber's love story goes way back. And if they have the support of their family, that's really all that matters. Now, all eyes will be on the couple's (and their parents') social media accounts for any further updates. Stay tuned.