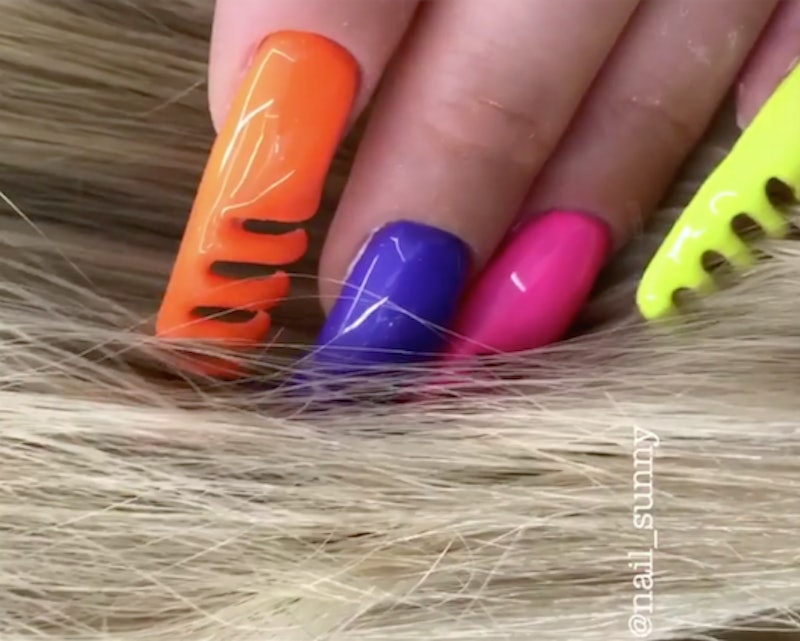 As of late, it's not enough for manicures to be simple and cute. The quirkier, the better, as unconventional mani jobs are winning across social media. And just when you thought things couldn't possibly get any stranger, the latest set of claws to break the internet mean hair comb manicures are now a thing,

In the world of nail artistry, things have gotten a tad out of control. Gone are the days of just painting on a couple of coats of polish and maybe jazzing things up with an embellishment or two in the name of having a chic pair of hands. Manis in 2018 have an entirely different agenda, with advanced sculpting and designing being thrown into what would otherwise be an ordinary paint job.

A mind-blowing manicure with moving eyes once made its rounds. Then there was Kylie's first photo with Stormi recreated on someone's nail, a manicure that was equal parts creepy and impressive. Now, the same salon that brought the internet those cool, but strange designs just found a way to make their on another level nail art functional. Sculpting artificial enhancements into mini grooming tools, Russia's Nail Sunny salon brought new meaning to finger-detangling.

Your eyes are not deceiving you. These neon pointers are actually shaped into tiny combs. It's not the weirdest mani you've probably ever seen, but there certainly isn't anything like it.

If you've ever had your nail enhancements on for too long, leading to the dreaded moment when they start to lift from your nail bed, then you're familiar with the ultimate struggle of snagging your strands on your fingers. Nail Sunny looks to have solved that issue by transforming a client's hands into workable grooming tools. There's no telling how practical these nails really are outside of combing through your hair, but they're at least functional for on-the-styling when toting around a paddle brush in your purse just won't do.

Seeing the combs for nails in action just may turn you on to the idea of getting a full set. They appear to effortlessly glide through the hair (although, they'd likely be a nightmare for curly and textured hair types). Posted with a "Brush nails - YAY OR NAY?" caption, Nail Sunny gave a behind-the-scenes look into just how the strange contraptions were created.

The process begins by brushing layers of clear gel onto the natural nail and forming the substance into lengthy claws. When the gel hardens, the technician is able to buff and shape the nail, and use a drill to carve out the teeth of the combs. Before painting on polish, the manicurist files the shapes until they're smooth. Finally, neon lacquer of varying hues is applied before the nails are cured underneath a lamp. It's really quite the mesmerizing process, showing how the nail tech is practically a sculptor.

No matter how much skill there is to be appreciated, though, one still has to wonder if comb nails are really a good idea. After all, they seem as though they'd get snagged on any and everything, and that's really only acceptable when it applies to the hair. Imagine trying to secure the clasp of a necklace or put on a sweater— it all just seems like a disaster waiting to happen.

On the bright side, comb nails don't go nearly as far as some of the other manicures done by the Russian salon that has shaken the internet to its core. Their pooping butt manicure and the silverware nails that could actually slice through food were far more disturbing. That said, comb nails aren't so bad.