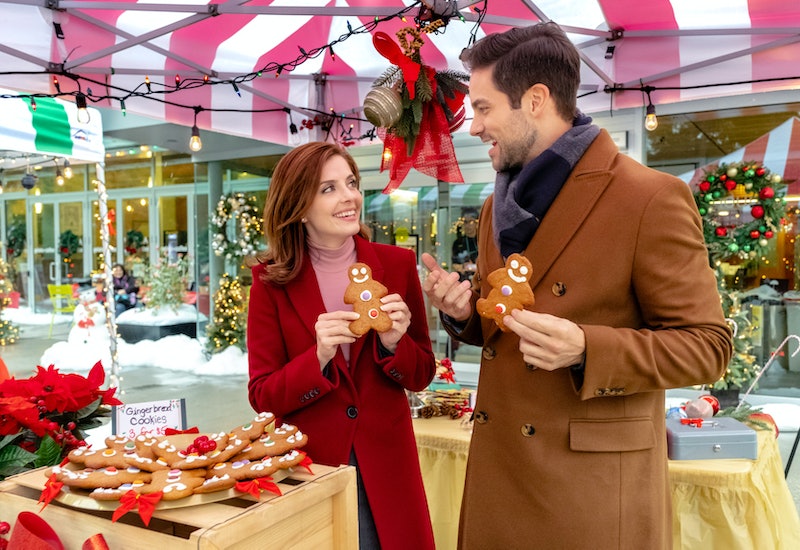 Christmas came early this year, everyone. Like, really early. As reported by Entertainment Weekly, Hallmark Channel will debut 40 new Christmas movies in 2019, shattering their previous record of 33, which they set in 2018. The new Yuletide treats will premiere across two channels: Hallmark Channel and Hallmark Movies & Mysteries, with 24 airing on the main channel and an additional 16 making their world debut on the sister network. That's a whole lot of merriment to look forward to, so holiday fans might as well start stocking up on cocoa now.

Believe it or not, even more fresh movies could be added to the lineup before December gets here. Per EW, the first premieres will air in July to celebrate the halfway to Christmas countdown series, Keepsake Christmas. The official Countdown to Christmas gets underway on Oct. 25 — yes, Halloween, so if you're looking for counter-programming, Hallmark has your back. The 40 Christmas movies ordered by the channel so far are set to fill in those two jolly schedules, but it's still early enough in the year that more holiday gifts could end up under the Hallmark Christmas tree.

So far, four movies in the lineup have been announced. First up there's Kristin Chenoweth and Scott Wolf's The Christmas Song, which is set to premiere in November, according to EW. Chenoweth will play a choir director whose star singer is the son of Wolf's recently widowed character. Additionally, A Family Under the Christmas Tree will find a sports photographer (Merritt Patterson) falling for her neighbor who needs help watching his nephew. Then there's Hallmark Movies & Mysteries sure to be weepie Holiday for Heroes starring Melissa Claire Egan as a woman who's been exchanging letters with a soldier played by Buffy the Vampire Slayer's Marc Blucas. Hallmark's sister channel will also premiere a new Blake Shelton-executive produced film during the holiday season, although details about that one are scarce for now.

There's a reason that Hallmark is making an even bigger deal about the holiday season than ever before this year. In 2019, the now iconic Countdown to Christmas will celebrate its 10th anniversary. "The tenth year will be the biggest, boldest Christmas in Hallmark Channel history," Crown Media executive VP of programming Michelle Vicary told EW. "Over the ten years, we have endeavored to be the no. 1 holiday destination, and achieved that over the last several years. What was different about last year — and what’s going to be really big about this year — is just how culturally relevant this has become in people’s minds beyond the programming, where we have towns asking if they can decorate themselves like a Hallmark Channel Christmas movie, and people having watch parties."

Lest you think Hallmark is getting complacent with its holiday meet cutes, the channel is also set to premiere at least two Hanukkah movies in 2019, as well. Additionally, they're branching out into reality programming with the tentatively titled Project Christmas Joy: Alabama, which will give a town in need a Christmas makeover, and Christmas Cookie Countdown, a five-part baking competition series. Both of those will air on Hallmark Drama.

Even though it's only April, Hallmark is making sure fans start finding their Christmas spirit early, because the channel's holiday lineup is shaping up to be nothing short of a yuletide miracle this year.