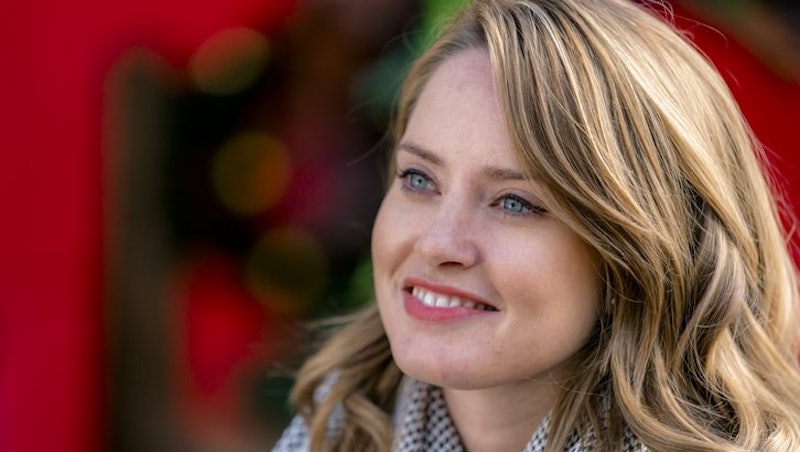 Royal fever has been at what feels like an all-time high in 2018, thanks to all of the royal weddings and babies. Everyone loves a good fairy tale both in real-life and onscreen. That's why Hallmark's Christmas at the Palace sounds like an absolute must-see this holiday season, especially for fans of the British royal family and Netflix's breakout original movie hit, A Christmas Prince.

Set to premiere as part of the Hallmark Channel's A Countdown to Christmas lineup. Christmas at the Palace stars Merritt Patterson and Andrew Cooper in a movie plot that sounds at once ridiculous and totally watchable. Patterson plays Katie, a former professional ice skater, who finds herself with an interesting gig just in time for the holiday season. It seems the the king of San Senova, Alexander (Cooper), needs someone to help his daughter perfect her ice skating skills in time for a Christmas performance. Enter Katie, who is definitely going to fall in love with the very single king while she's teaching his daughter her moves on the ice.

There's sure to be conflict, of course. After all, the king's subjects may not be pleased with him falling in love with an American commoner, even if she does have seriously impressive ice skating skills. That's all part of the fun though. Without a few bumps, Katie's road to becoming queen of San Senova would be way too smooth.

It's going to be hard to watch this royal holiday treat without thinking about that other fictional country that stole everyone's hearts last Christmas — Aldovia. The fictional home of Netflix's A Christmas Prince is going to be hard to top, but the Hallmark Channel might just be up to the task given how long they've been making viewers swoon over their festive films.

Just in case you were worried that Patterson and Cooper wouldn't know their way around a palace, they already have royal titles on their résumés. Patterson previously starred in Hallmark's A Royal Winter as another character who stumbles into a relationship with a member of a royal family (seriously, who knew it was so simple to meet a prince or a king?). Meanwhile, Cooper starred in E!'s The Royals as Lord Twysden Beckwith II, and he had a key role in Hallmark Channel's Royal Hearts. Clearly, the channel couldn't have found a better pair of actors to bring the king of San Senova and the ice-skating champion who steals his heart to life.

Sadly, there's no trailer out for Christmas at the Palace just yet, but if you loved A Christmas Prince, this royal holiday film is sure to keep you satisfied until the sequel debuts on Netflix later this year. It has everything: a commoner who unexpectedly falls for a royal, ice skating magic, and a made up country you're almost definitely going to wish you could relocate to by the time the credits roll.

Christmas at the Palace premieres Thursday, Nov. 22, on the Hallmark Channel, so go ahead and mark your calendars now. After all, this movie might just be the royal love story/ice skating drama mash-up of your dreams.