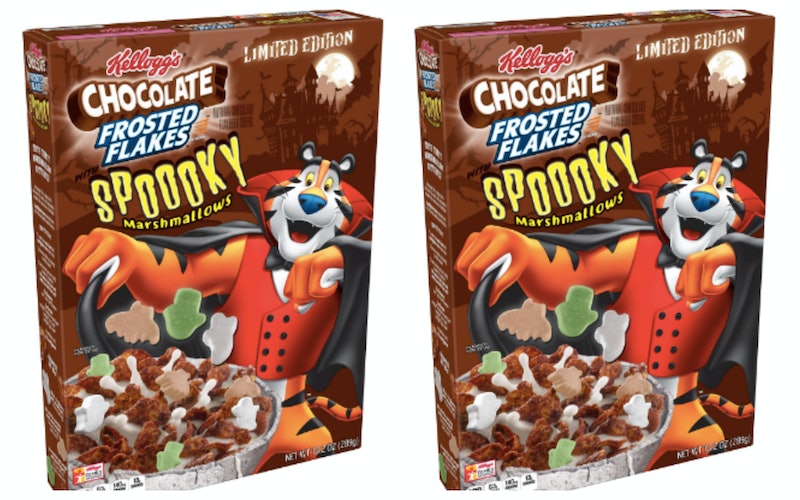 One School Food Service/Remixed By Bustle
By Emma Lord
Aug. 6, 2018

Get ready to get your full spook on, y'all, because it seems we have skipped straight past pumpkin spice season and taken the express train to Halloween. Images of this year's Chocolate Halloween Frosted Flakes with "Spoooky" Marshmallows have hit the internet on various Instagram accounts as well as school food service buyer One School, and boy howdy, do they look delicious. (Bustle has reached out to Kellogg's for confirmation about the when the new "Spoooky" Marshmallows edition will be available, and will update upon response.)

Per @candyhunting, a popular Instagram account devoted to all things junk food news, the marshmallow lineup has ditched the skeleton marshmallows of yore and this year are debuting them in the shape of ghosts, bats, and monsters of Frankenstein. Tony the Tiger has also donned a costume of his own, appearing as a vampire, leading me to wonder if there's a hole in my heart where a tiger-vampire crossover movie belonged all along.

More importantly, though, according to @candyhunting, this is far from the only marshmallow mix-up we'll be getting this fall: Froot Loops and Apple Jacks will also be coming out with "spoooky" versions, using the same 'mallow iterations. Not to rain on the other cereal mascots' parade, but Frosted Flakes is the only one going full chocolate, and therefore the only one that has my full '90s baby allegiance.

All of this news, though, should not overshadow what I am personally so emotionally invested in that I have sent my entire family on a quest to find them: early in the summer, images of a Pumpkin Spice Frosted Flakes flavor started to circulate around Instagram. Kellogg's confirmed to Bustle that the flavor was expected to hit grocery stores in September. Basically, 2018 is the year that Tony the Tiger came for me and my aggressive sweet tooth, because if you find me somewhere other than the cereal aisle between now and November it will be a straight up miracle.

This is far from the only pumpkin spice-related news that's just starting to peek over the horizon. Any day now, for instance, the Pumpkin Spice Latte Twitter will likely awake from its long slumber and give us some sort of inkling for when to expect its comeback (usually late August for Gold Card members, and a few days later for everyone else). And I'm not gonna lie — ever since last year I have had some Pumpkin Spice Oreos on the brain (although arguably there is nothing in this world that tastes better than an orange Halloween Oreo, don't @ me, the difference is real).

Until then, though, we'll all just have to endure the sticky slow month that is August by enjoying the last of our rosé, chilling at the beach, and listening to the Mamma Mia: Here We Go Again soundtrack until we have become less human and more of a sentient pair of overalls. I know, poor us, right? Just remember when the pumpkin stuff does land this year to enjoy it while it lasts: like most pumpkin and Halloween treats, the Frosted Flakes and its "spoooky" brethren are only here for a limited time.