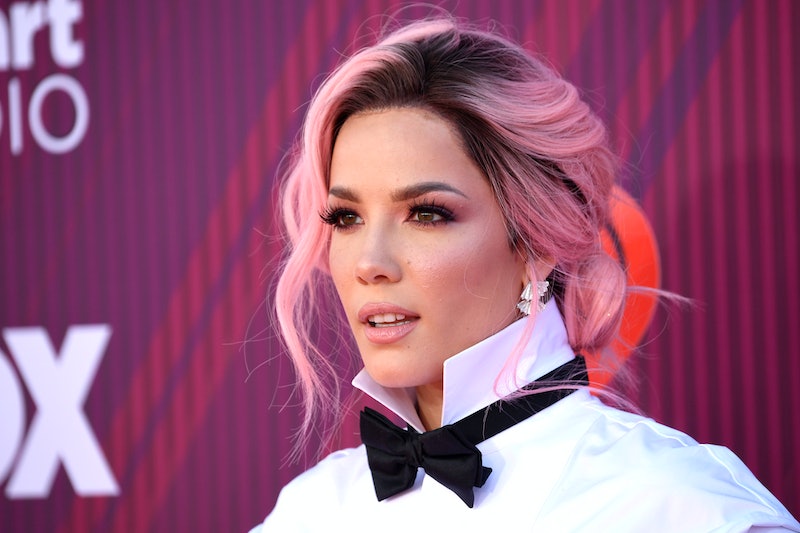 People living with chronic illnesses often find themselves explaining to others what "chronic" actually means. It doesn't mean "just for a bit" or "temporary" — it means ongoing. Singer/songwriter Halsey tweeted about chronic illness and how people often misunderstand what "chronic" means, and it was an incredibly relatable moment.

Halsey, who lives with endometriosis, tweeted: "me: sick. someone: omgyourealwayssick!!! me, with a chronic illness, staring into the camera like I’m on The Office." Anyone who's ever had to explain that being sick isn't just a one-off thing for them will understand just how on-point Halsey's tweet is. Before she received a diagnosis for her endometriosis, Halsey's pain became so extreme that she collapsed while on tour, the Endometriosis Foundation of America quoted the singer as saying on an episode of The Doctors.

"My tour manager had to take me to a hospital. And the whole time I was there no one knew what to tell me. Dehydration, stress, anxiety, and I was saying, ‘What about my pain?’ A lot of the time they can make you think it’s in your head," Halsey said, adding that she had mixed feelings about eventually learning that endometriosis was the cause of her pain. "It was so bittersweet because the relief of knowing I wasn't making it all up, and I wasn't being sensitive, and it wasn't all in my head, but it also kind of sucked to know that I was going to be living with this forever."

Halsey has been open about her struggles with endometriosis. She's talked about everything from undergoing surgery for the condition to freezing her eggs. After Halsey's tweet, hundreds of supporters and fellow chronic-illness warriors chimed in.

If you'e not familiar, endometriosis occurs when the tissue that lines the uterus, called the endometrium or endometrial lining, migrates outside of the uterus and behaves as it would inside the uterus, AKA shedding during your period. This can cause inflammation and severe pain, as the shedding lining has nowhere to go, as it does during a period.

"[Endometriosis] can attach to any of the female reproductive organs including, but not limited to, the uterus, fallopian tubes, ovaries, uterosacral ligaments, the peritoneum, or any of the spaces between the bladder, uterus, vagina, and rectum," the Endometriosis Foundation of America explained on its website. "Endometriosis can also involve the bowel, intestines, appendix, or rectum." Like myriad other misunderstood illnesses, there is no known cause or cure for endometriosis.

Aside from dealing with the ups and downs of managing a lifelong illness, having to explain it to people over and over again can be exacerbating. And because many people living with chronic illnesses appear fine on the outside, others may assume the illness has "gone away" when they see them performing everyday tasks. What's more, people who live with chronic illness are constantly given unsolicited advice for alleviating their symptoms, like trying yoga or washing their hands more.

As a member of the chronic illness club myself, I can tell you that people with chronic illness often muddle through when they feel horrible. If someone with a chronic illness opts out of doing something or calls in sick to work, this can mean the pain or symptoms are debilitating.

If you know someone with a chronic illness, offer love and support. Don't give them medical advice or tell them that yoga or hot water with lemon will fix them right up. Just do your best to be a good friend.

More like this
The Real Reason Your Instagram Story Viewers Show Up In That Order
By Emma Carey
Why TikTok Is Obsessed With Caesar Salads Right Now
By Alexis Morillo
Behind The Hilarity Of The "POV: You Walk Into My Room" TikTok Trend
By Lexi Inks
TikTok's Butter Board Might Be The New Cheese Plate
By Emma Carey
Get Even More From Bustle — Sign Up For The Newsletter