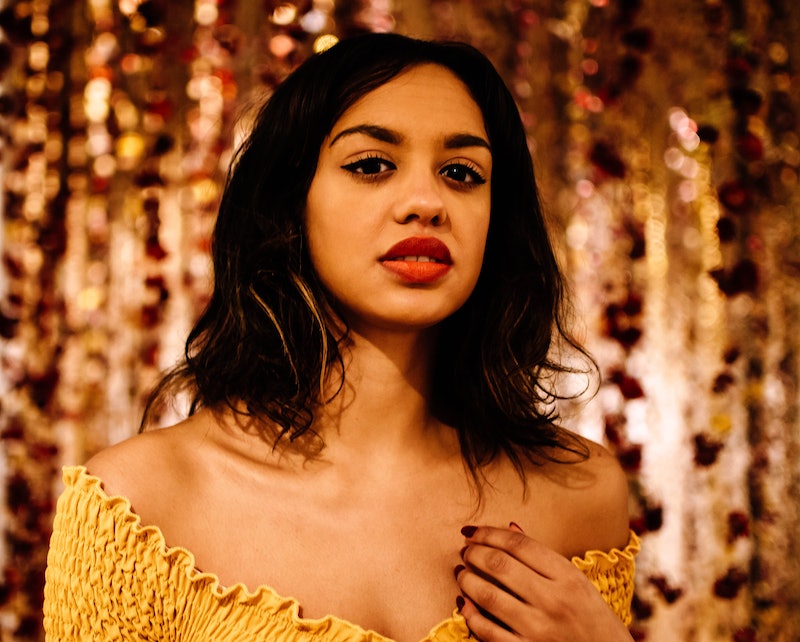 A cursory glance at pop culture today and you wouldn’t be mistaken for thinking that mixed race identities have never been more visible. Take the likes of Jorja Smith, Mabel, and Raye. And less than two months ago, Meghan Markle made history as the first mixed race royal in the British monarchy. While it’s problematic enough that representations rarely deviate from the "acceptable" face of mixed race (light-skinned and complete with Eurocentric features or at the very least, "ambiguous"), the dialogue surrounding the complexities of mixed race identities remains absent from the mainstream.

It’s this that motivated London-based photographer Susan Dale to launch HaluHalo, the first photo series of its kind to explore the lesser-known intricacies of mixed race identity. “Thanks to social media, there’s a visual representation of mixed race people compared to when I was growing up but there’s still a lack of public discourse on what it means to be mixed race," she tells me. "I was curious to find out if anyone else felt the way I did or shared my experiences.”

Dale likens HaluHalo to Humans of New York, albeit with a multi-racial lens. While initially she didn’t encounter any issues approaching complete strangers of mixed ethnicities, ages and genders to share their experiences and how they self-identify – “I started with the most basic method by sliding into their DMs on Instagram!” – she found that they would either hesitate or completely disappear when it came to answering her interview questions.

“One person of white British and Black Jamaican mix admitted that if I’d contacted her a few months earlier she would have declined because she’d identified as black all her life and it was only recently that she’d started to re-evaluate her identity,” Dale recalls. “It was proving a difficult and painful process trying to reconcile it all.” No wonder then she attributes the process of appearing on HaluHalo as similar to a sense of "catharsis", not least as subjects are sharing such a private aspect of their identity so publicly. Some, Dale reveals, haven’t even with their closest friends and families.

Perhaps the most powerful aspect of HaluHalo is how is the series challenges the idea that mixed race by default denotes black and white heritage. After all, subjects found in HaluHalo so far have included a half-Guyanese, half-Filipino woman and a man of Jamaican, Bajan, Dutch, and English heritage. When we’ve come to associate certain people with "looking" mixed race (namely, those of black and white heritage), was it a conscious decision to celebrate the spectrum of mixed-race identities that stray beyond this?

“Absolutely,” Dale says. “I want to challenge that narrow perception. Growing up, the icons of mixed race beauty that I looked up to were women like Thandie Newton. Even though they had the same mix as myself, I felt as though I’d somehow come out wrong. I was the 'wrong' type of mixed race. I didn’t have what they did — delicate Eurocentric features, light eyes, and 'good' hair. So I can only imagine how difficult it was for someone who’s ‘Hapa’ (half-white, half-Japanese) or Blasian (half-black, half-Asian) growing up and not seeing their faces reflected back at them through pop culture or the media.”

While a significant number of her subjects at present are still those of mixed Afro-Caribbean and Caucasian heritage, she hopes to broaden this as HaluHalo progresses. “I’m hoping that more people with different ethnic mixes will be emboldened to share their story,” she tells me. “And more men too!”

Does Dale then find the term "mixed race" limiting? Even the British Sociological Association branded it as "misleading" back in 2015. While Dale concedes she describes herself as "mixed race" – “perhaps that is easy for me because I am of both black and white heritage” – she stresses that a more inclusive term should be adopted in the future: “We need to use a term that is as relatable for a person of German and Japanese heritage as it is for a person of Egyptian, Jamaican, and Cuban heritage,” she affirms.

HaluHalo is particularly pertinent when a cursory glance at the narrative surrounding the first mixed race royal in British history has suggested that mixed race identities have finally been accepted as part of the fabric of British society. While Dale acknowledges the strides Markle has made in raising the visibility of mixed race identity not just in Britain but beyond — “a woman of colour has penetrated the most staid white institution and made it more reflective of modern society. It’s also the first in the media that a mixed race person’s identity has been accepted as mixed rather than black” — she stresses that this has only gone so far. “The state of mixed race identity in the UK cannot rest on the shoulders of one American woman,” she affirms.

After all, people of mixed race heritage are held as proof that we’re living in a supposedly "post-racial" world — mainstream media coverage surrounding Markle’s ascension to the monarchy in May was testament to this — yet Dale maintains that this isn’t quite the case. Brexit and the rise of far-right parties across Europe have sparked unprecedented levels of xenophobia in recent years in Britain — if anything, the UK has arguably become more intolerant.

“People are becoming more polarised and outspoken in their views and that can bleed into families where one half (usually white) is supporting ideas that are promoting upheaval and hardships for the other half of your heritage,” she agrees. “You are loved by these family members but they are also in their own way opposed to the existence of you and your ethnic half.”

Poignantly, Dale can recall only one film that encapsulates the conflicts that comes with balancing two cultures — and that was almost two decades ago. “You’ll see a mixed race family shoe-horned into a sofa ad, maybe at a push you’ll see a mixed race family depicted in a TV drama,” she says. “The only film that’s ever showed a mixed family in all its beauty was East is East, based on a Pakistani-White family growing up in Salford during the 70s. That film was made 19 years ago and I’ve never seen anything like it since.”

As for her favourite image? One of subject, Aisher-Asher Morgan (above), in a soon-to-be demolished car park, where she traced her journey to re-embrace her entire heritage, rather than her Jamaican roots: “I managed to get a shot of her with her reflection floating in a dark void and I felt it was quite a poignant depiction of her emerging acceptance of her dual heritage. It’s really poetic.”

While monoracial people might find her project "eye-opening" and acknowledge that their interactions with mixed race can at times be "othering," ultimately, Dale hopes that those who identify as mixed race might find solidarity in the stories on HaluHalo and finally see their experiences reflected back for the first time: “I hope they understand that how they feel about their identity is valid and that they aren’t alone. They deserve a space.”