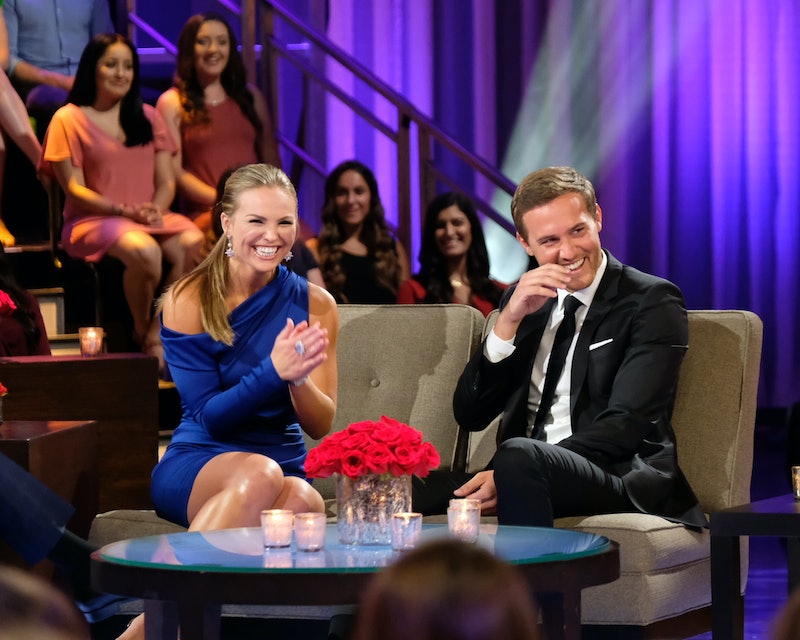 It's been about five months since their breakup first aired on television, but it looks like things between Alabama Hannah and Pilot Peter are finished. On Monday night's episode of The Bachelor, Hannah and Peter officially called it quits after having a very difficult — and somewhat steamy — conversation during the second group date. The premiere episode left off on a cliffhanger with Peter and Hannah leaving the group date (which involved the girls sharing sex stories in front of an audience) in order to finally work through their lingering feelings for one another.

Even though he had previously asked Hannah to consider returning to the Bachelor Mansion and give their relationship another shot, Peter was clearly struggling with his feelings. "Is she just missing the what-ifs and not just missing me?" he wondered aloud. Still, it looked like the pilot and former beauty queen were indeed missing one another, as they stared longingly at one another and cuddled up on the couch.

However, just when Bachelor Nation was convinced that Hannah and Peter were about to fly away into the sunset together — or, at the very least, about to make out on national television — Peter realized that he had a group of women waiting impatiently to compete for his heart. "I can’t do this. I’m gonna go back to the girls," he said, brushing glitter off of his pants. As they finally hugged goodbye, Hannah told Peter that, things were "not supposed to happen this way" between them, but it looks like both of them are ready to leave the past in the past.

Of course, just because the pair decided to officially end their relationship, that doesn't mean Peter wasn't still shaken up by the sudden return of his ex-girlfriend. "This is confusing to me," he told the cameras after walking away from Hannah. "I wanted to kiss her, yes. It’s is what I wanted to do. It wasn’t that long ago we broke up so i guess it’s okay to feel this way."

One thing he did know what that he was going to have to apologize to the girls on the group date — and apologize he did, before cancelling the performance part of the date in order to "gather" his thoughts. "We had a chat that I think we needed to have [and] got some stuff off our chests," Peter explained, adding that he wasn't "in the right headspace" to enjoy the date. "I feel horrible because this is not fair to you at all. ... This is tough because I know you guys know what I had for her is really real. It hasn’t just gone away."

Despite the lingering tension between Hannah and Peter, it looks like the pair have truly put their past behind them, and the remaining ladies in the Bachelor Mansion don't have to worry about a familiar face joining the fight for Peter's heart.