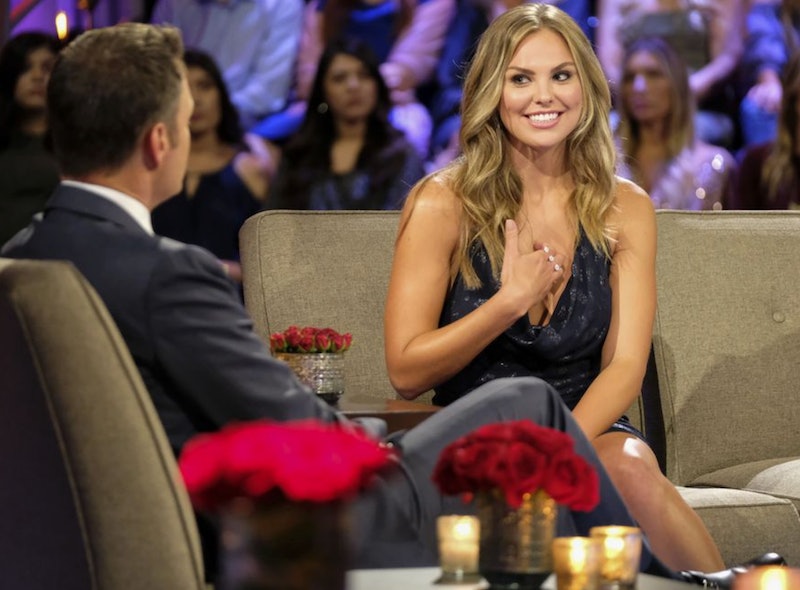 The bumpy but great road that has been The Bachelorette Season 15 will reach its end this week, and the star of the season has some shout outs to dole out. On Monday, July 29, Hannah Brown thanked her Bachelorette producers in an Instagram post that will only make you miss seeing her on your television set every week all the more. She sure is a gracious gem, that Alabama Hannah.

Several hours before the first part of the two-night finale began, Hannah shared a series of behind-the-scenes photos of the producers she worked with on The Bachelorette, tagging Julie LaPlaca, Samantha Taylor, Todd Snyder, Bill Dixon, Megan Kropf, Ryan Herbert, and Elan Gale. “The ultimate #beastsquad,” began the caption. “feeling all the feels because they are about to kick me off your television, and it’s becoming real that these people have to move on to another rose handler.” She called them “brave souls” who “have been through it y’all," noting that they had a first-row seat to "the breakdowns, the meltdowns, the breakthroughs, and witnessed ‘beast mode’ that could never be aired on national television."

"I was challenging," she wrote. "somehow, these people still love me and root for my happiness.” Hate to burst your bubble, Hannah, but you are very easy to love and your happiness is very easy to root for.

Through the ups (e.g., just about any scene with John Paul Jones) and plenty of downs (e.g., that awkward one-on-one date with Luke P. where Hannah called a timeout so she could vent about the date to the producers), Hannah felt like the Bachelorette producers were in her corner throughout the season and, as she noted in her IG post, "always tried to put the human Hannah, not the Bachelorette Hannah first." Whether the producers actually gave Luke P. that ring and shuttled him on over to the post-fantasy suites rose ceremony or not (the Luke P. saga never ends, does it?), Hannah feels like they had her best interests in mind. She is grateful for the team of producers, and she made that pretty dang clear in her post. She wrote,

“regardless of what any outsiders might think, my producers (and all the people behind this show for that matter) put everything into making sure I shine, I’m fulfilled, and loved during this journey. Do they make entertaining television? sure—and they’re damn good at it too. but I’m thankful they always tried to put the human Hannah, not the Bachelorette Hannah first. I’ve learned so so much and I’m so thankful for this group of humans who challenged me, encouraged me, and gave me the opportunities to grow into the woman I always have been—and to be really proud of THAT girl. Thanks for seeing more in me than a people pleasing, southern belle with a goofy smile plastered on her face. she gone. I love you all. (I also should say I’m sorry for making y’all cry sometimes with my fury, and for always being late. *however it was kinda fun right?—you’ll miss me.)”

What do you know, Hannah can even make tardiness charming. Because of course she can. We'll all miss you, A-late-bama Hannah.

More like this
Bachelorette Gabby Kissed Her New Fiancé On 'Dancing With The Stars'
By Jake Viswanath
Clayton & Susie Broke Up, Citing "A Significant Amount Of Pain" After 'The Bachelor'
By Jordyn Tilchen
Kesha Is Down To Be The Next Bachelorette
By Jake Viswanath
Kira's Post-'Bachelor In Paradise' Activity Has Included Travel, TikTok, & Tea
By Grace Wehniainen
Get Even More From Bustle — Sign Up For The Newsletter