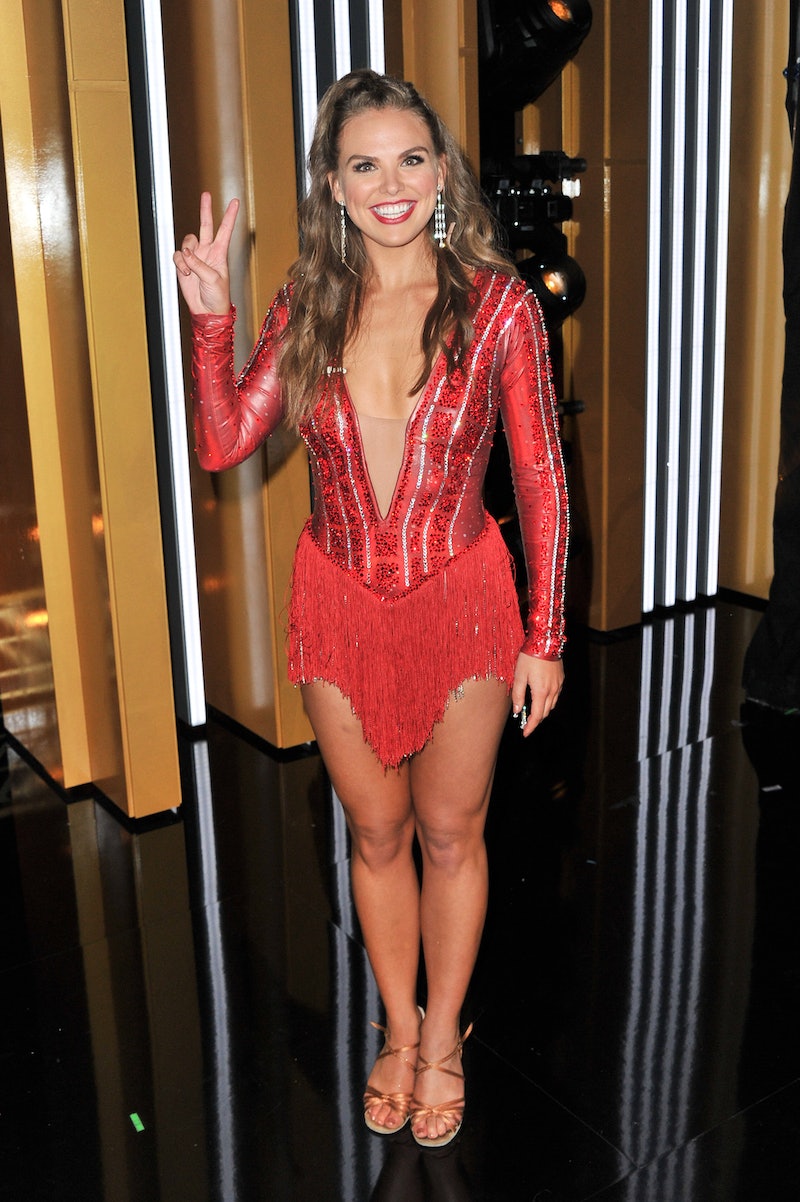 Alabama Hannah ushered in her 25th trip around the sun by earning a high score on Dancing With the Stars, hanging out with members of Bachelor Nation, and taking a trip down memory lane. Hannah Brown's 25th birthday Instagram posts include a hilarious look back at her last birthday, which just so happened to be captured by The Bachelor cameras. On Tuesday, Sept. 24, the Beast of the Bachelor Mansion revisited that one time she went out with Colton Underwood and ended up giving The Champagne Toast That Never Quite Bubbled Up. What a gift that moment was and is.

On Instagram Stories, she shared a snippet of the one-on-one date she and Colton went on during the second episode of The Bachelor Season 23 and wrote, "What a difference a year makes. Cheers to my birthday." As fans may recall, that date, which literally took place on the future Bachelorette's 24th birthday, was not exactly a smooth one. When Colton asked Hannah to make a toast, she froze up and burst into nervous laughter. She tried to start over, but she could not come up with anything beyond bursting into more nervous laughter, wishing herself a happy birthday, and a foolproof “Roll tide!”

Just as Hannah said on Instagram Stories on Tuesday, a heck of a lot has changed since she stumbled through that toast on her birthday last year. A few months after that uncomfortable date, she was picked to be the Bachelorette, and as she proved on the first night of her season, her days of being at a loss for words were long behind her.

She may be done with struggling to come up with toasts on the spot, but she is not done with her Bachelor Nation family. Hannah also shared an IG Story that she took with fellow Bachelor stars Colton, Cassie Randolph, Katie Morton, Demi Burnett, and Heather Martin, noting that she was "celebrating [her] birthday with all the same people as last year." Some things change, and some things stay the same.

But wait, there's more: The group of Bachelor Season 23 alums also attended Monday's taping of DWTS to watch their costar rack up an impressive 24 points for her Viennese Waltz. Bachelor Nation patriarch Chris Harrison and journalist Lauren Zima were also there to cheer on Hannah. Thankfully, the Bachelor Nation denizens gathered for a photo.

On Tuesday, Katie posted a birthday note to the former beauty pageant queen on Instagram alongside a picture she took with Hannah, Demi, and Heather while they were all backstage at DWTS. She wrote, "one year down, one million to go. happy birthday miss @hannahbrown."

Over on Instagram Stories, Demi shared a video she took with Hannah. The recently engaged Bachelor in Paradise star yelled into the camera, "Happy birthday, Hannah! It's one year of us being friends!" Wait, it is Hannah's birthday and Demi and Hannah's friendship-iversary? What an important day. Sept. 24 should be made an official holiday.

A mere 365 days ago, Hannah was sitting next to Colton and giving that awkward toast. And now she is one of the greatest Bachelorettes of all time (that is an objective fact) and vying for the mirror ball trophy on DWTS. So far, it looks like the competition is going well for her: On Monday's episode, she scooped up the best score of the evening. The following day (aka her birthday), she shared a screengrab from the routine she performed and wrote, “the best score for my last night as 24. what a night, what a year.” What a year, indeed.