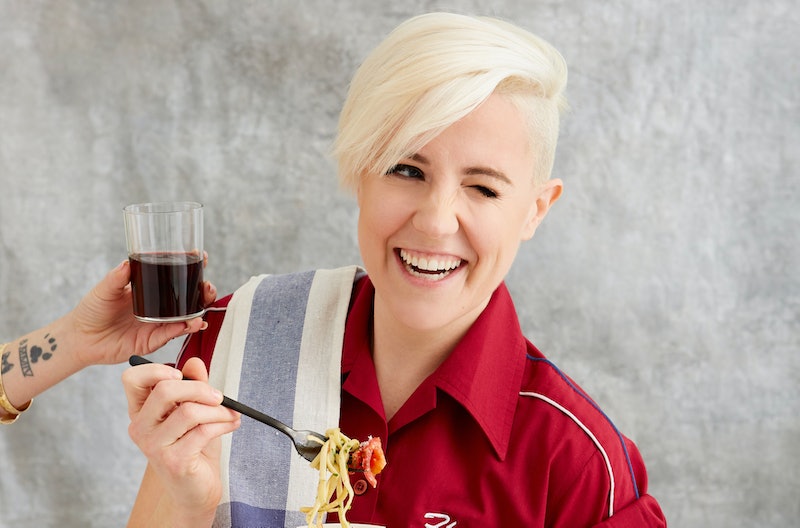 YouTuber and author Hannah Hart is about to make your holiday feasts a little bit... buzzier. Penguin Random House will be publishing the sequel to Hart's popular My Drunk Kitchen cookbook, My Drunk Kitchen Holidays!: How to Savor and Celebrate the Year, on Oct. 22, 2019. Bustle has all the exclusive details you need to know about the book below.

Hart first launched the "My Drunk Kitchen" series, in which she imbibes while cooking and baking dishes like lemon pie, pancakes, and chicken chili — sometimes with guests like author John Green, actor Seth Rogan, or comedian Sarah Silverman — on her YouTube channel back in 2011. The series has since received millions of views and launched Hart's first cookbook, published by Dey Street Books, an imprint of HarperCollins, in 2014 and a Food Network show, I Hart Food, in 2017.

Known as much for her comedic entertainment as she is for her work as an activist and author, Hart has established herself as one of the most influential creators of the early YouTube generation — and its that love of community, along with her enthusiasm for food, that really drive her latest release.

My Drunk Kitchen Holidays! promises to be a new collection of recipes, activities, and suggestions about hilarious and joyous ways to celebrate with family, friends, pets, and your entire community. The book will commemorate holidays from Valentine's Day through the Fourth of July, and will culminate with the big fall holidays: Halloween Thanksgiving, Hanukah, Kwanzaa and Christmas. But Hart's book also promises to take an inclusive look at all of our favorite festivities, and will even include celebrations for Pride Month and some lesser-loved special days like International Left Handers’ Day (yes, really.)

It sounds like exactly the sort of lighthearted, tongue-in-cheek look at community and festivity that we could all use in 2019. In my opinion, finding small moments of joy throughout the year, and putting aside time to eat, drink and be merry with the people who matter most to us should really be the bare minimum requirement of a successful year, after all. With Hart's hilarious touch, that now seems more than doable.

In a statement released by Penguin Random House, Hart says, “Plume and Penguin Random House are the perfect partners for the next My Drunk Kitchen book. Together, we are all ready to take this Kitchen to the next level. I'm more than ready for 2019 to have something fresh, funny, and fulfilling. How about you?”

My Drunk Kitchen Holidays! won't hit shelves until Oct. 22 — just in time to make the most of the fall festive season — but you can pre-order it now.