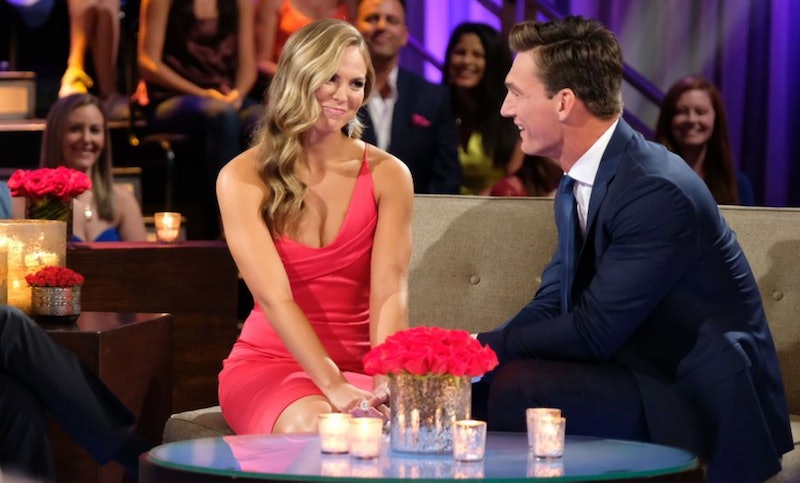 Maybe don't expect the “winner” of The Bachelorette Season 15 to release a torch song where he laments the time his ex-fiancée asked his friend/former competitor out on live television. As he revealed on Good Morning America, Jed Wyatt supports Hannah Brown and Tyler Cameron’s drink date. Right there with you, Jed.

When Michael Strahan asked him about The Drink on the Thursday, Aug. 1 episode of the morning chat show, Jed didn't lash out or get petty. Instead, he kept it pretty diplomatic. He said,

“You know, I had a feeling something was up and I couldn’t really put a finger on it when I was there that day. I know there was a lot of nerves and a lot of tension. You know, her happiness is my best interest, I want her to be happy. Tyler’s one of my friends, he’s a great guy, and you know, if that’s what is supposed to be, I support that.”

If by “her happiness” he means “my music career,” then this checks out — OK sorry, sorry. It's best not to kick a dog food jingle when it’s down. Let's keep it moving.

“That day” Jed mentioned in the GMA interview is, but of course, the day they taped the second half of the After the Final Rose special. On Tuesday, July 30, Jed, Tyler C. Hannah, and host Chris Harrison gathered in front of a studio audience to record The Bachelorette Season 15's live finale episode. At the top of the episode, viewers watched Hannah call off her engagement to season “winner” Jed after she was made aware of his murky intentions and his murky dating history. By the episode’s end, Hannah asked season runner-up Tyler C. out for a drink. They didn't dive back into a relationship right then and there, but as Hannah told E! News, The Drink would give them a chance to "be normal human beings" and see if there's still something there.

It sounds like Hannah and Tyler C. are serious about The Drink. As Hannah put it in an Instagram post that went up after the After the Final Rose special, "And to your burning questions: Yes, the drink is happening. No, you’re not invited." In his post-ATFR IG post, Tyler C. wrote, "Looking forward to that drink." Right on.

Yes, the Drink is happening, but as Tyler C. explained to TV Guide on Wednesday, they aren't going to rush it."I think we're first trying to get in the same state as each other, and then kind of go from there,” he explained. When the The Drink finally does come to be, Tyler C. told TV Guide that either a tequila soda or a beer will be his drink of choice for the evening. He also predicted that the star of The Bachelorette Season 15 will go with white wine or champagne. Man, can't wait for this date... that we're not invited to.

Hannah and Tyler C.’s drink is happening, Jed has accepted it, and considering the way this season of The Bachelorette imploded at the end? This is outcome is Better Bowl than expected.

More like this
So... When Are Gabby & Erich Getting Married?
By Kadin Burnett
Bachelorette Gabby Kissed Her New Fiancé On 'Dancing With The Stars'
By Jake Viswanath
Everything To Remember About Lace Morris Before 'Bachelor In Paradise' Season 8
By Grace Wehniainen
Here's Exactly When Rachel & Tino's Fight Happened After 'The Bachelorette'
By Grace Wehniainen
Get Even More From Bustle — Sign Up For The Newsletter