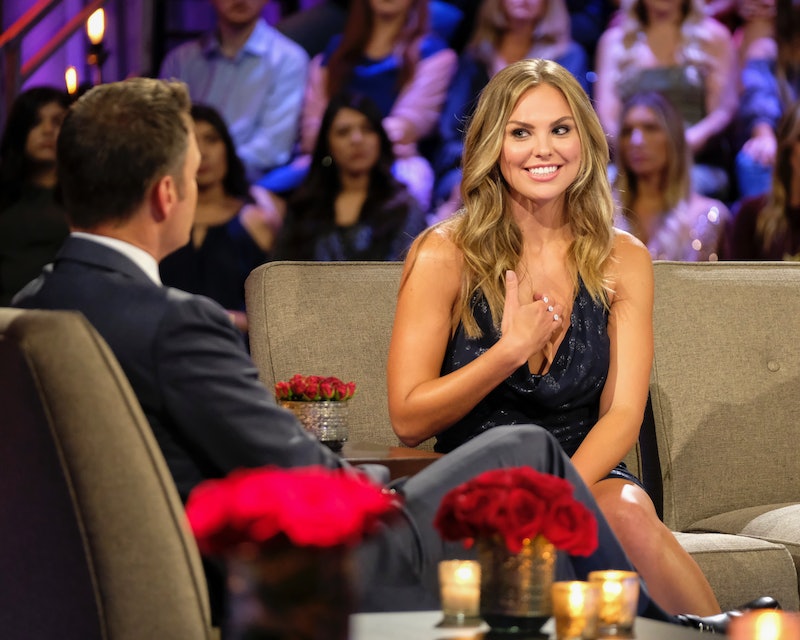 Hannah Brown's time as the Bachelorette has been tumultuous, to say the least, but now, she's looking to the future of the beloved franchise. In the aftermath of the explosive season finale, Hannah revealed her picks for the next Bachelor, and they're exactly who fans want to see on screen next season.

During her appearance on the brilliantly titled After the After the Final Rose segment on Jimmy Kimmel Live!, Jimmy Kimmel asked Hannah which one of her own suitors she would like to see as the next Bachelor. But the fans' first choice — Tyler Cameron — might not be possible. “A lot of people would think it might be Tyler but now it can’t be Tyler because you’re going for drinks with him,” Kimmel said, as reported by People.

As fans will recall, The Bachelorette finale ended with Hannah breaking off her engagement with Jed Wyatt, and asking Tyler out on a date during the live After the Final Rose portion of the episode. “We’ll see where the drinks go,” Hannah said, laughing, before adding, “It’s so weird picking the Bachelor from my ex-boyfriends.”

Eventually, Kimmel convinced Hannah to share who she wants to see get their chance at finding love, and her answer shouldn't surprise you. “I thought Peter [Weber] was really great. Mike [Johnson]‘s great. I want them to have happiness so maybe it’ll work out better for them than it did for me.”

Fans have been campaigning for Mike to become the next Bachelor for a very long time — even before he actually got eliminated from the competition. He just charmed viewers that much, even impressing host Chris Harrison, who told People that Mike was a "contender" for the job. “How could he not be a contender with that smile?” Harrison remarked. “He’s one of my favorite people we’ve ever had on the show. He’s a love of a man.. He’s just a sweet guy. He gives the best hugs, the best smiles and the best advice. He’s just a really good man and yeah, of course he’s a contender.”

Other viewers have been pulling for Peter, aka Pilot Pete, to be the next Bachelor after Hannah broke it off with him during part one of the season finale, shutting him out of the final two. He's sweet, caring, and, to be quite honest, the fact that he apparently had sex with Hannah four times in a windmill doesn't hurt. He even has the support of last season's Bachelor, Colton Underwood.

Both Mike and Peter have commented on the support, and they both seem open to the possibility of finding love on The Bachelor. Mike confirmed that no offer has been made to him as of yet, but he admired the campaigning nonetheless. "I haven't spoken to no one about it," he revealed to Entertainment Tonight after his elimination. "Yes, my homies from the show were speaking on it, and it's really cool to hear that."

Peter, however, seems to have a more optimistic outlook on the possibility of being the next Bachelor. "I know this whole situation didn’t work out the way I was hoping, but Hannah truly showed me a different love than I had ever felt," he told People after the season finale. “So it’s given me hope that I have more love to find. I wouldn’t say no to trying it again because I know the experience works. And I’m hopeful that my person is right around the corner.”

Whoever ends up becoming the Bachelor, fans are sure to be ecstatic regardless. And if these two men are the top two currently in the running, the powers that be really can't go wrong.