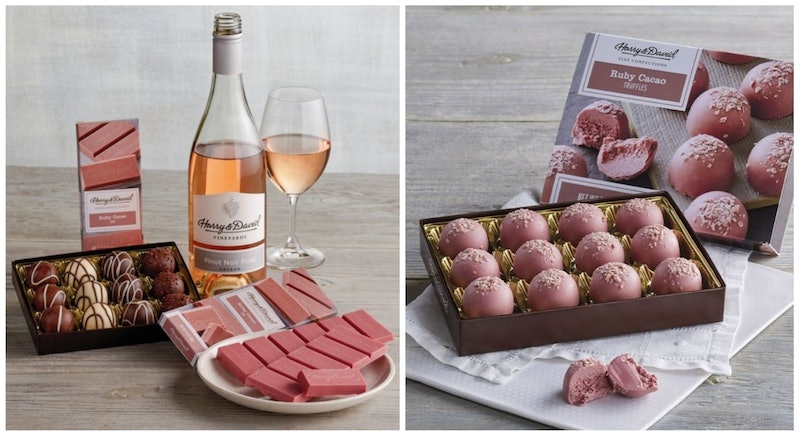 I’ve often said that, to me, the best part of Valentine’s Day is that it’s the one time of year candy comes exclusively in all the best flavors. Usually I’m talking about gummy candies — but now I might have to readjust my definition of “all the best flavors” to include something chocolate-related: Harry & David’s Ruby Cacao chocolate collection is here, and I kid you not, it is the millennial pink Valentine’s Day dream you didn’t even know you wanted in your life. Between these chocolate treats’ delightful pink hue and the unique flavor of the new variety of chocolate known as ruby chocolate, they’re guaranteed to make your taste buds as happy as your Instagram.

We were first introduced to the idea of ruby chocolate in 2017 courtesy of its creator, the Swiss company Barry Callebaut. Barry Callebaut has been close-lipped on how ruby chocolate is actually made; its main ingredient is purportedly “ruby cocoa beans,” although according to industry news publication Confectionary News, “ruby cocoa beans” aren’t a new or unique kind of cocoa bean, but rather existing varieties of cocoa beans processed in a particular way. Peter Boone, Barry Callebaut’s chief innovation and quality officer, additionally told the New York Times in 2017 that “beans that earn ruby status have a particular mix of compounds,” although he didn’t say what those compounds are. In any event, though, it seems that when beans determined to have those specific compounds are processed using Barry Callebaut's mysterious method, they impart both the pink hue and fruity flavor profile to the chocolate made from them.

Like Barry Callebaut’s ruby chocolate, Harry & David’s take on the treat is made from “ruby cocoa beans.” However, the H&D Ruby Cacao Collection centers not around ruby bar chocolate, but largely around ruby truffles — chocolate truffles being made of soft, creamy ganache, not solid chocolate, although they’re often coated in solid chocolate. Harry & David’s Ruby Cacao Truffles feature a “subtle berry flavor” that goes along with their pink coloring beautifully. The truffles are available in boxes of 12, with each truffle weighing about 0.6 ounces each.

But although the truffles make an appearance in many of the Ruby Cacao Collection offerings, they’re not the only type of ruby chocolate available. If you prefer your boxes of Valentine’s Day chocolates to have a little more variety, the Hearts and Roses Collection features 20 heart- and rose-shaped ruby chocolates, 12 filled with marionberry caramel and eight taking the form of ruby chocolate-covered lemon raspberry truffles.

In the immortal words of Futurama, shut up and take my money.

Why did ruby chocolate make such a big splash in 2017? Largely because the invention of new chocolate varieties doesn’t happen all that often. Indeed, ruby chocolate is often credited as being the first new variety of chocolate invented since Nestle created white chocolate 80 years ago.

It’s worth noting that the history of white chocolate isn’t actually quite that clear cut; no one really knows exactly who invented the stuff, or when. According to the blog for Boston’s storied Captain Jackson’s Historic Chocolate Shop, however, we do know that Nestle was selling the Galak bar — which is widely considered to be the first white chocolate bar — in Europe by 1936. In English-speaking countries, the Galak bar was known as the Milkybar — but although the Milkybar did eventually make it to the United States, it wasn’t the first mass-distributed white chocolate bar available over here. That honor goes to the Alpine White bar, another Nestle product that debuted around 1948.

Regardless as to the exact date of white chocolate’s invention, though, ruby chocolate is the first new type of chocolate to have come along in the decades since it arrived — and with its imminently Instagrammable appearance, it’s no wonder that interest in it picked up almost immediately. It was finally brought to market last year when a ruby chocolate Kit Kat debuted in Japan and South Korea.

And now, we’ve got a whole host of millennial pink chocolate confections to choose from, thanks to Harry & David — in addition to, y'know, that doughnut bouquet they also brought us recently. Treat your favorite people. Treat yourself. Happy Valentine’s Day!

More like this
Why TikTok Is Obsessed With Caesar Salads Right Now
By Alexis Morillo
TikTok's Butter Board Might Be The New Cheese Plate
By Emma Carey
26 Ghost Story Podcasts To Get You Ready For Halloween
By Jessica Booth, Mia Mercado, JR Thorpe and Emma Carey
10 Stranger Things-Inspired Halloween Costumes For True Fans
By Emma Carey
Get Even More From Bustle — Sign Up For The Newsletter