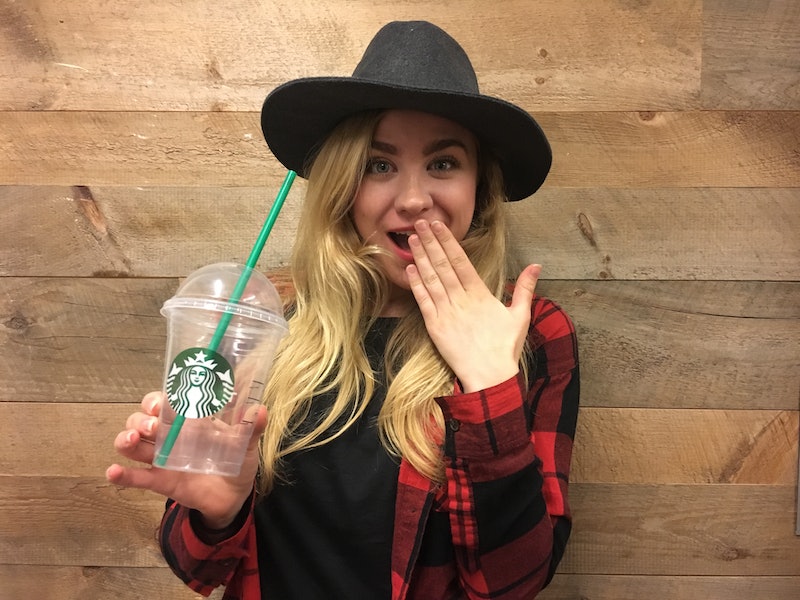 Nobody was more conflicted about the popularity of the Unicorn Frappuccino at Starbucks than Harry Potter fans. I mean, on the one hand, a drink that looked like the manifestation of a Pygmy Puff's soul! And on the other hand ... potential lifelong consequences for drinking the blood of an innocent creature in exchange for immortality, Tom Marvolo Riddle-style? Although a large percentage of us (including li'l ol' Hufflepuff me) took our chances and drank it down anyway, thankfully there is a much more Potter-friendly version to hit the market today: the Thestral Frappuccino at Starbucks.

Flavored with the darkest chocolate in Remus Lupin's supply, drizzled with the tears of ancient fallen warriors, and topped with a light whipped cream powdered with the ashes of the invisible volcanic island in the Bermuda Triangle from which the first Thestral hails, this drink is a sure crowd-pleaser among the existentially fraught set. Admittedly, it is not the most Instagram-friendly of the frapp options — but what it lacks in aesthetic, it more than makes up for in its devastatingly brutal reminder that although you may have narrowly avoided death once, it is still coming for you! And in fact, it's coming for us all!

As someone who screams "TAKE MY MONEY" at anything Harry Potter- or Starbucks-related, naturally I had to, had to try this beverage for myself. And my earthly friends, it did not disappoint.

Admittedly, some people — namely, people who didn't engage in a Battle Royale to the death over Oscar Isaac's heart last month and watch the light die in several peoples' eyes — won't be able to see the Thestral Frappuccino in its full glory. But TRUST me, non-death-witnesses. This drink is, dare I say, more delicious than the realization of your own mortality! (YUM, amirite?)

Now, it's worth noting that this isn't exactly on the official Starbucks menu. You can only see it under the Frappuccino options on the board or in-app if you've, say, watched the hottest Hufflepuff in your class get murdered by a sociopathic madman who came back from the dead, or held a dying house elf in your arms as he wheezed your name with his last breath.

But if you do manage to order it, then enjoy! And remember, kids: the end is inevitable!