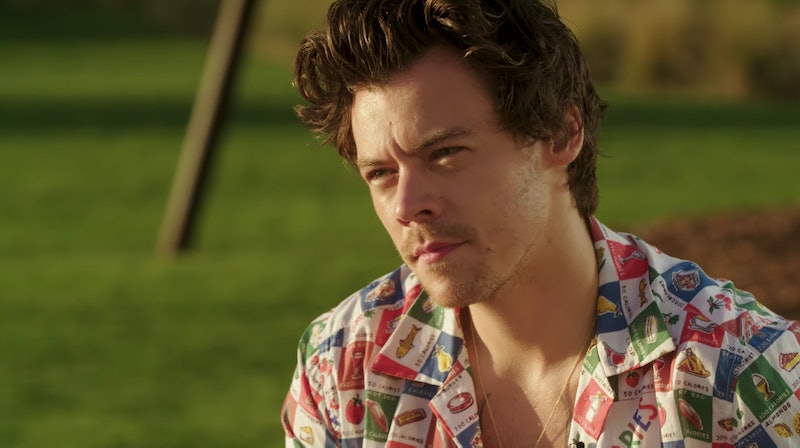 In the run-up to the release of his second solo album, Harry Styles has been doing the interview rounds. But an extensive talk with Zane Lowe has revealed a lot about the singer's current mindset. Namely, that he is "so uncomfortable" with being seen as a sex symbol.

Appearing on New Music Daily with Zane Lowe on Apple Music's Beats 1, the 25-year-old said he tries to think about being considered a sex symbol "as little as possible" because "it's a very strange, dynamic thing. It's also like a weird thing to think of about yourself." Totally fair.

Styles — whose new album, Fine Line, comes out Dec. 13 — also touched on a more intimate topic, saying sex "used to feel so much more taboo for me." When he was in One Direction, he said "the thought of people thinking that I had sex was like, 'Oh no, that's crazy. What if they know?'"

But now, Styles appears to be willing to be a little more open. We already knew his upcoming album would be "all about having sex and feeling sad," courtesy of a Rolling Stone interview. But Styles opened up further to Lowe, saying: "Even just coming into this record, I wanted to feel a little less guarded with stuff. I wanted to feel a lot freer and just more joyful and honest."

Even break-ups were alluded to: "I think a lot of the time, when there's tabloid stuff, for example, of people breaking up, I think people forget that there's a person who's also broken up with someone, which is sad. You get sad when you break up with someone." (In fact, one track, "Cherry," will feature vocals from his ex-girlfriend.)

Freedom is something Styles brought up again and again throughout the course of the interview. According to the singer, it was weaved into the entire making of his album.

"I was trying to redefine what success meant to me," he explained. "For so long, especially in the band, it was like every album got bigger, and every tour got bigger. And it was always growing. And I think when I went to make the first record, it was kind of freeing because I felt like, 'Well, I don't have to do this anymore.'"

He also delved into a feeling almost every young person can relate to: the feeling of anxiousness. "I'm just trying to go through life being a little less worried about stuff," Styles said, adding that this especially applies to working.

He went on to explain how he has re-evaluated his goals, saying: "If you don't hit the top of the chart, your life doesn't change. I think realising that it's like if that was what I was aiming at, and then it didn't happen, then I'd feel so much worse. But redefining it for me has been amazing to be like, 'Oh, but that's not the game I'm playing.' There's a freedom with that."

A lesson we can all learn from.