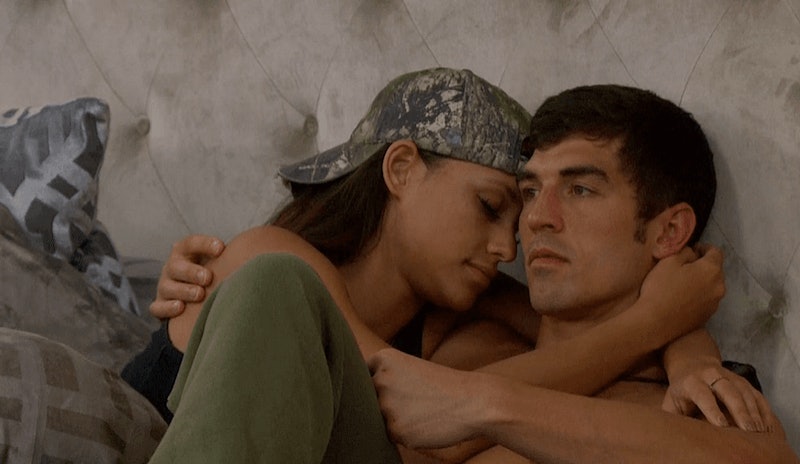 The reign of Jody seems to soon be coming to an end, but this showmance certainly made the most of their time together. Cody and Jessica have the most unpopular showmance in the house, but this alienation has only brought them closer. These two got together early in the season, and they quickly moved from flirtation to public displays of affection. If you're wondering whether or not Cody and Jessica have hooked up in the Big Brother house, it depends on your definition. They have been kissing and cuddling, and some stuff may have gone down under the covers of the HoH bed, according to some live feeder claims — but of course it's hard to prove one way or the other. (Bustle reached out to CBS for comment on the matter, but has not yet received a response.)

Trying to have sex in the Big Brother house while keeping one's privacy is a near impossible task. While Cody and Jessica haven't been getting physically close on the regular, there are more than enough clues to draw the conclusion that these two did seemingly hook up in the Big Brother HoH bed. When they say that Big Brother is always watching, they mean it.

Late night live feed watchers caught a glimpse of the two seemingly taking their relationship to the next level earlier this season. On the morning of July 1, before Cody's empire came crumbling down, the two were seen in the HoH bed with some suspicious movements coming from under the covers. After a few minutes of under-the-cover movement, they pulled the bedsheets over their heads. It's not clear exactly what happened as the camera cut way to give them some privacy, but they showed enough to prove that the pair is turning the heat up on their showmance.

With Cody and Jessica's time in the house together likely coming to an end, there are only a couple of days left for them to enjoy each other's company before they are separated. At least if they get evicted, they'll be able to do whatever they want with each other without the intrusive eye of Big Brother.