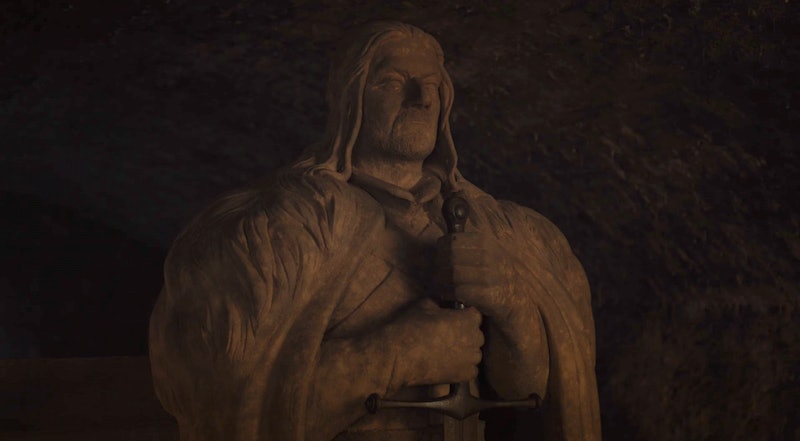 Jon, Sansa, Bran, and Arya have all come together after their arduous journeys on Game of Thrones, but they might be getting another unexpected Stark family reunion during the Battle of Winterfell. There aren't as many Starks buried in the crypts on Game of Thrones as you may think — at least, of those fans would be familiar with — but the ones whose remains are down there could be making appearances if the White Walkers raise the dead. To prepare yourself for this terrifying possibility, it's good to know which Starks could be making a comeback ahead of the Battle of Winterfell.

Ned was beheaded in King's Landing and, as Joffrey so kindly showed Sansa, his head was put on a spike there. But Tyrion Lannister is to thank for Ned being back in Winterfell. Tyrion convinced Cersei to give Ned's bones back to his family as a "gesture of good faith," and Littlefinger delivered them to Catelyn in Season 2, Episode 4, "Garden of Bones" while she was at Renly Baratheon's camp. "Your husband was an honorable man," Littlefinger told Catelyn. "He should rest beside his family in the crypts beneath Winterfell." Littlefinger then boasted about this to Jon in front of Ned's tomb in Season 7, Episode 2, "Stormborn," but Jon didn't take too kindly to Littlefinger's continued presence in his family's affairs.

Before this interaction, Jon mentioned that his father's — ahem, uncle's— bones were already in the crypt. "I'm going to bury my brother in the crypt, next to my father," Jon said after Rickon's dead body was carried into Winterfell during the "The Battle of the Bastards" in Season 6. So fans also know that poor Rickon is down there after Ramsay Bolton killed him.

As for the other two main Starks who were killed on the show — Catelyn and Robb — that's a different story. After they were murdered by the Freys at the Red Wedding, they weren't even granted the decency of having their corpses sent to Winterfell. Sansa told Tyrion in the Season 4 premiere, "Do you know what they did to my brother? How they sewed his direwolf's head onto his body? And my mother, they say they cut her throat to the bone and threw her body in the river."

Sansa doesn't specifically say how Robb's body was disposed of, but no one has ever confirmed that the Freys sent it or Grey Wind's back to Winterfell. And even though she was technically a Stark by marriage and also killed at the Red Wedding, Talisa Stark and her unborn baby aren't brought up. So you can assume they aren't down in the crypts either.

When it comes to other Starks, the half-human, half-White Walker Uncle Benjen didn't make it back after saving Jon Snow in Season 7's "Beyond the Wall." (Although he very well could be marching among the army of the dead now.) Jaime revealed through some exposition in Season 1's "Lord Snow" that Ned's other brother Brandon and their father Rickard were killed by the Mad King. Rickard was killed by wildfire, so there would be no remains. And while it's never specified on the show — or in HBO's Game of Thrones Viewers' Guide — Brandon was tortuously strangled as he tried to save his father in the books. According to an image that has circulated the internet, Brandon's death by strangulation had been filmed for the unaired pilot of Game of Thrones, so it's possible his body is in the crypts. But the one sibling of Ned's who is definitely down there is his sister Lyanna.

Viewers have known since the Game of Thrones' first episode that Lyanna's remains are in the crypts. Upon arriving at Winterfell, King Robert immediately went to pay his respects to his love. So other than Ned, Rickon, and Lyanna, the rest of the Starks down in the crypts aren't characters fans are overly familiar with. Sure, Bran the Builder could be there, but as we've never seen him before, it wouldn't be that big of a deal if his skeletal remains became reanimated — you know, beyond the fact that a corpse was coming to life. But by now that's old hat for Game of Thrones.

Many fans are convinced that the Starks will become wights thanks to the White Walkers during the Battle of Winterfell. However, are all the surviving Starks that dumb to send the most vulnerable people down to the crypts if that were the case? Hopefully not. But at least if that does happen, you know now which familiar Stark faces will be haunting your dreams.