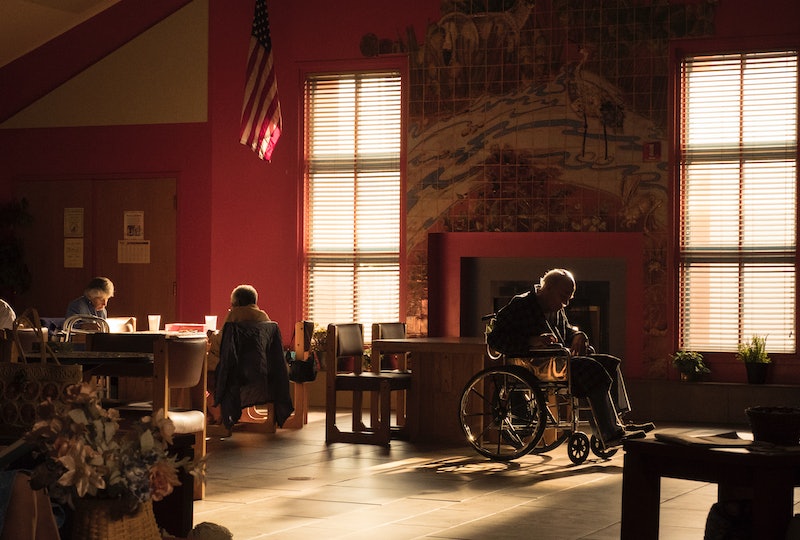 The penultimate episode of Better Call Saul Season 4 gives viewers a lot to look forward to for the season finale. But it's a small moment toward the beginning of "Wiedersehen" that might excite fans the most. Spoilers follow. Viewers finally learned about Hector's bell on Better Call Saul, and it turns out that Lalo is responsible for it. No wonder Saul was so scared of Lalo when he first met Walter White. But let's go back a little bit. In Breaking Bad, Hector Salamanca's only form of audible communication was his golden bell that he would hit with his right index finger. The sound became synonymous with this drug dealer — and also with the demise of both him and his nemesis Gus Fring. So in case you had any doubts of how important Lalo is to the story, he proves with this gift that he's going to be pretty essential moving forward.

With Nacho by his side, Lalo rolls into the assisted living facility where his uncle Hector is living at now. (If you're trying to keep track of the Salamanca family tree, Lalo is most likely a cousin of Tuco and "the Cousins" Leonel and Marco.) Lalo recounts the time that Hector burnt down the hotel of a "big college professor" who had been rude to him. Hector slowly murdered the owner of the Hotel Tulipan as his wife listened and then burned all of the man's belongings. But not everything was destroyed. Lalo says he went back into the hotel after the fire because "I'm sentimental. I wanted a souvenir." He then presents his uncle Hector with his signature bellhop bell.

Since Gus stopped his medical treatment after his stroke, Hector's main mobility is using his right index finger to tap. And the bell is the perfect fit — complete with an absurdly appropriate evil backstory. Armed with this new form of communication, Lalo sends Nacho away so that he and Hector can have a private talk about Gus. Once their conversation is done, Lalo gleefully tells Nacho, "Same old, Hector. He just wants to kill everybody."

Hector's bell is iconic to Breaking Bad fans. It encapsulated the rage Don Hector felt at being trapped in his body in Breaking Bad and Better Call Saul confirmed that Gus was partially responsible for this loss of mobility. The bell is also what kills Gus. In the Season 4 finale of Breaking Bad, Walt conspires with Hector and creates an explosive that will be triggered by the bell. Hector frantically rings his bell in one last act of revenge and sets off the explosion, killing himself, Gus, and Tyrus. After the Breaking Bad finale aired, the bell was purchased by a fan for $26,750 in a props auction. As The Hollywood Reporter noted, only the inscribed Leaves Of Grass that Gale had given to Walter went for more money.

As for the rest of Lalo's actions in "Wiedersehen," he then brings Nacho to Los Pollos Hermanos. Unlike Hector back in Season 3, Lalo is a bit more subtle when it comes to getting Gus' attention at the restaurant. He pretends to be interested in a franchise opportunity and once they're alone in Gus' office, Lalo tries to get Gus to turn against Don Eladio. But Gus is smart enough not to incriminate himself.

Both men play nice with Lalo, saying they should work together. But this is clearly the beginning of another beautiful rivalry. Because while Hector couldn't have explained to Lalo the details of how Gus left him paralyzed, he most definitely could have communicated the depths of his hatred. So Gus knows he's in for some more Salamanca trouble when Lalo tells him, "I'm gonna be in town for a while." Lalo then has Nacho take him to Gus' chicken farm that serves as the drug pickup spot. But Gus has the upper hand since seemingly unbeknownst to Lalo, Nacho is really working for Gus.

Besides the added roadblock of Lalo eyeing his drug stash, Gus also suffers a setback at his meth superlab. Chief engineer Werner Ziegler deceives Mike and flees the safe house at the end of "Wiedersehen." (As any Sound Of Music fan worth their salt knows, "Auf Wiedersehen" means "Goodbye.") While Werner's betrayal is more a blow to Mike who trusted him, Gus isn't going to be happy about it either and it should have a massive impact (detonation pun totally intended) on the season finale.

Then there's the fact that the bar association didn't reinstate Jimmy. Kim and Jimmy had rebonded after she chose to go the "Slippin' Kimmy" route, but Jimmy takes this loss out on her in their first major fight. However, they end the episode seemingly coming up with another plan to make Jimmy a lawyer again. So while Hector receiving the bell isn't a huge plot point in "Wiedersehen," it's an important reminder of the storytelling Better Call Saul does so well ahead of the Season 4 finale. Because Hector's bell highlights how items and events so small and unassuming can have truly explosive consequences in this universe.

This article was originally published on Oct. 1, 2018