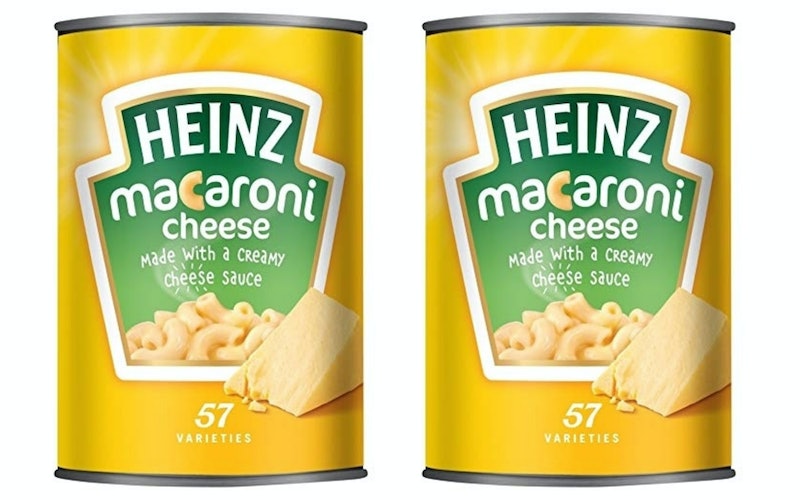 There are very few things that I look at and think, "Wow, that would be even better if it came from a can." In fact, I can't think of a single thing. But, because as humans we like to push the limits of what we can do, rather than what we should do, I give to you: mac and cheese in a can. Or should I say, Heinz Macaroni Cheese in a can. Why is it called "macaroni cheese" rather than "mac and cheese"? Or "mac n' cheese?" Because it hails from jolly old England, and the people here are too fancy for your "n'," that's why. Not mac n' cheese, not mac and cheese, we're talking about macaroni cheese here, people — like the kind Queen Elizabeth eats, I'm assuming. It's "in a cheese sauce," according to the description, and it's definitely runnier than I expected it to be. But the people love it.

Seriously, mac and cheese in a can (or should I say "tin") is kind of a thing here in the UK — but now it's made it stateside. Heinz, the brand behind the king of all ketchups, sells this delicious, gelatinous concoction — and now it's available on Amazon and can be shipped straight to your door, starting at just $3.05 plus shipping. So if your lazy self never wants to make mac and cheese again, it doesn't have to.

Not only that, Heinz produces a whole load of pasta-type things in a can in places like the UK and Canada. In fact, the UK's love of Heinz Spaghetti Hoops is legendary — children are practically weaned on the stuff.

Of course, if you'd rather have your mac and cheese not in a can, there are ways to make that happen. If you still don't want to do any cooking, Panera's Build Your Own Mac and Cheese lets you get that perfect combination of cheese and toppings, without you having to do any damn work. Costco even offers a — wait for it — 27-pound tub of mac and cheese, if you're really in it for the long haul. But some places dream even bigger. KFC in Singapore introduced a mac and cheese bun, so you can enjoy your favorite foods stuffed between your other favorite foods.

In fact, the OG of mac and cheese — Kraft — has even gotten in on the action. They've regularly introduced new shapes to keep our palates interested (because yes, different shapes do taste different). Now, with the addition of Unicorn Shapes Macaroni and Cheese, they have truly entered the 21st century and proved they understand our whimsical, whimsical needs. As mac and cheese is the world's most perfect food — and that's not just according to my opinion, that is actual science — the more ways to eat it, the better.

The real question is, if you're a true mac and cheese believer, are you brave enough for mac and cheese in a can? Are you really too lazy to add cheese powder to noodles and butter? (ALSO: Kraft is so much better if you use all butter and no milk, just saying.) Now you can see how strong your devotion really is. Heinz Macaroni Cheese is out there waiting for you — are you ready?