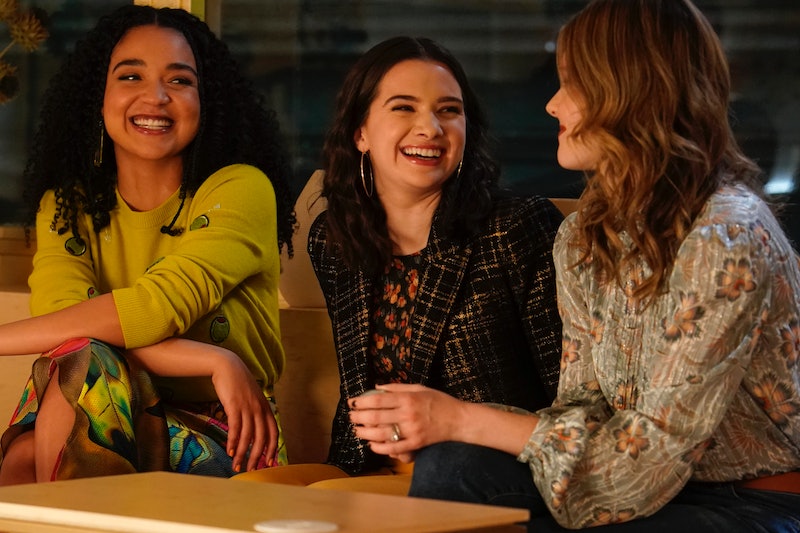 Kat, Sutton, and Jane are returning for part two of The Bold Type Season 4 on June 11, and the trio will be adjusting to some major life changes in the back half of the season. After a wedding, a breakup, and a job loss in the midseason finale, here's what fans can expect next from The Bold Type. The series has made its mark by speaking candidly about issues that a millennial audience can relate to, including LGBTQ+ rights and navigating tricky workplace politics, and that's not going to stop in the remaining episodes. Unfortunately, filming on Season 4 was affected by the coronavirus pandemic, meaning fans might not get the intended ending to the season for a while.

In a March interview with TV Line, Katie Stevens (Jane) revealed that the final two episodes of The Bold Type's forth season weren't completed when production was forced to shutdown. "We were in our last two episodes of the season [before production shut down due to the coronavirus outbreak], so we were like halfway through shooting 17 and 18, which were our final two episodes, and they're so good," she said.

For now, it seems The Bold Type Season 4 will have to end with episode 16, but there's no shortage of heartfelt stories, twists, and new adventures ahead for Kat, Sutton, and Jane as they deal with the decisions they made in the midseason finale. Read on to find out what's next for each of the BFFs.

While all three of the friends are facing new chapters, Jane's storyline has the potential to be the most challenging. The Bold Type midseason premiere will pick up three months after Jane's decision to have a preventative double mastectomy. In the Season 4 part two trailer, she introduces her friends to her new breasts, but that lighthearted moment quickly become more complicated as she admits that "these don't feel like me."

In an new interview with TV Insider, Aisha Dee (Kat) shared that "Jane post-mastectomy is figuring out how she feels about her body and developing a new relationship with it." At the same time, she'll also be dealing with the aftermath of her breakup with Ryan, and adjusting to her body's changes without his support.

Of the three friends, Sutton's life changes are perhaps the most upbeat, but that doesn't mean she won't face her own issues as Season 4 continues. When the season kicks off, she'll still be basking in the newlywed glow of marrying Richard, while also preparing to kick butt in her new position as a stylist at Scarlet. The season kicks off with her getting ready for her first photo shoot, but before she wows her bosses, she'll have to get past Tony-winner Ali Stroker, who is guest starring as Olivia, a fashion rep who has an issue with Sutton's client, per Entertainment Weekly.

Now that Kat has been fired from Scarlet for releasing her boss' tax returns, she's going to discover a new passion: activism. "For Kat, we're going to see her try to navigate this new chapter in her life, where she doesn't have Scarlet and the title of Social Media Manager as part of her identity," Dee told TV Insider. "We're going to get to see her figure out what her next steps are and see her working as an activist a little bit."

The actor also revealed that fans will see Kat organizing a protest at the beginning of the midseason premiere. According to Dee, her character is going to be using her privilege as "somebody who has the time and the space to be able to organize." But she's also going to have to deal with the reality of trying to live in New York City without a job and a firm support system to fall back on as the season progresses.

As if that wasn't enough for Kat to deal with, she'll also begin a new flirtation as she moves on from her first real heartbreak. "She does have a little love-hate interest thing coming up this season," Dee teased. However, Kat will be "cautious" with her heart in the wake of her breakup from Adena.

More like this
Everything To Know About 'Only Murders In The Building' Season 3
By Gretchen Smail and Kadin Burnett
This 'Gossip Girl' Wardrobe Error Has Gone Viral On TikTok
By Alyssa Lapid
'The Last Of Us' Has Officially Been Renewed For Season 2
By Darshita Goyal
Shonda Rhimes Responded To The Surprise Exit Of A Day 1 'Grey's Anatomy' Figure
By Grace Wehniainen
Get Even More From Bustle — Sign Up For The Newsletter
From hair trends to relationship advice, our daily newsletter has everything you need to sound like a person who’s on TikTok, even if you aren’t.