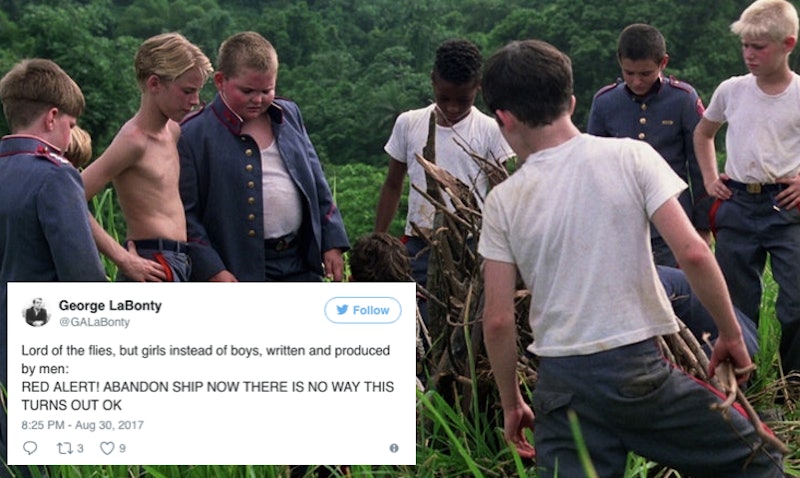 If there's anything the world learned from the all-female Ghostbusters movie, it's that reboots featuring no Y chromosomes are a lightning rod for criticism. So when Deadline announced that an all-girls Lord Of The Flies movie is in the works, you better believe the internet had some strong words to say about it. Yet, rather than most of the anger being thinly-veiled sexist remarks that stem from misogyny, like what happened with the all-female reboot of Ghostbusters before it was even released, the opposite is happening with Lord Of The Flies. Much of the commentary is coming from people who believe that an all-girls version misses the point of the original book and isn't good for female representation, especially since it's being created by two men, Scott McGehee and David Siegel.

If you skipped reading Lord Of The Flies in school or haven't seen the two movie adaptations from 1963 and 1990, the simple synopsis is that the novel is about a bunch of boys being stranded on an island and their failed attempt to create a civilized society. Instead, the boys revert to savagery and turn against one another. Author William Golding discussed before he died why he made the book about all boys. Along with the fact that he had more understanding of the male psyche as a man, Golding argued that if you put only girls on an island, it would not have successfully worked as a microcosm for society. He meant this in a positive way since Lord Of The Flies focuses on the evils and violence of society.

Whether or not you agree with Golding's reasoning — and with the amount of reductive references to Mean Girls that the Lord Of The Flies reboot is getting, many people do not — there's no denying that an all-girls version doesn't match Golding's vision. And while the backlash is getting its own backlash from people who think feminists are being hypocritical for condemning an all-female remake when they persistently ask for more representation on film, here's a sampling of what the critics of the Lord Of The Flies reboot are saying on Twitter.

It Goes Against The Intention Of The Book

It Shows A Lack Of Genuine Interest In Stories About Girlhood

And It's Not Being Made By Women

As Deadline reported that McGehee and Siegel haven't even started writing the movie yet, the Lord Of The Flies reboot is still a long way off, so time will only tell if the film will be able to adequately capture the horrors of humanity that Golding's book did while also telling an authentic female story. But it's certainly a tall order — taller than a pig's head mounted on a sharpened stick.