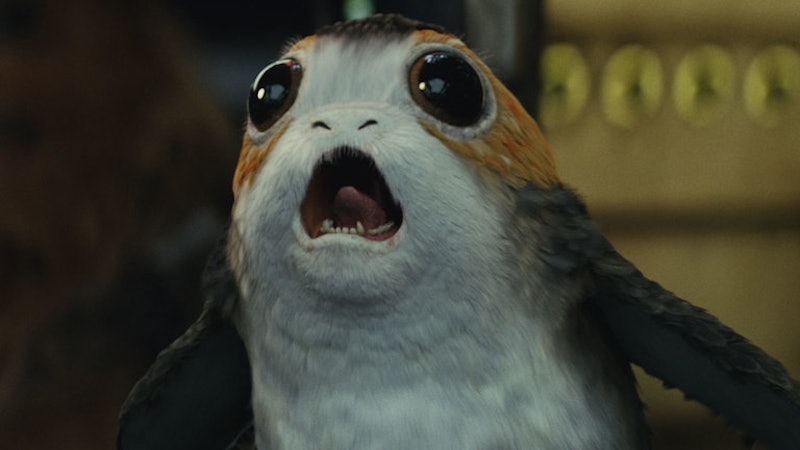 The Last Jedi is expected to set the box office on fire and become a massive hit for the biggest franchise in entertainment, as the latest Star Wars installment promises to continue the saga with Luke Skywalker training Rey in the ways of the Jedi. But many Star Wars fans are dreading the film for one reason and one reason only: Porgs. You have no doubt seen the adorable new alien creatures in the film's marketing, where they've been heavily featured, and you may have even liked them, but a lot of people hate Porgs already. So just why is that?

It's certainly not the first time adorable creatures in the Star Wars universe have gotten some criticism. Porgs are just the latest target in the long-running crusade of some Star Wars fans against all things cute and cuddly in a galaxy far, far away. This tradition largely stems from what these fans view as a kid-ifying effect these characters have on the franchise. If you go back and look at the very first Star Wars film, now called A New Hope, the movie wasn't intended strictly for children. Sure, kids naturally flocked to the film thanks to its fantasy elements and became massive fans, but it was largely aimed at adults as a special effects-heavy blockbuster the likes of which no one had ever seen. The movie even features a scene in a dive bar where a guy gets his arm cut off after pulling a gun — not exactly kids stuff.

After children went nuts over the film, the movie tie-in toy business was largely created as a result. Star Wars wasn't the first film to have licensed toys sold on its behalf, but the Star Wars toy line by Kenner was by far the most successful example of movie merchandising up to that point. And while sequel The Empire Strikes Back remained dark in tone, arguably even darker than the original film, the third movie — Return of the Jedi — received (and still receives) loads of criticism among the Star Wars faithful, who accused franchise creator George Lucas of softening the series' content with the main intention of marketing toys to children.

The aspect of Return of the Jedi that most embodied this criticism was the introduction of the adorable Ewoks. The gibberish-speaking teddy bears continue to be a polarizing force in Star Wars fandom, with many seeing them as nothing more than a vehicle to sell more toys. These criticisms gained credence in 2010 when Gary Kurtz, who produced the first two films with Lucas, confirmed that he left the franchise after Empire because of the focus on selling toys.

"The toy business began to drive the [Lucasfilm] empire," Kurtz told the Los Angeles Times. "It's a shame. They make three times as much on toys as they do on films. It's natural to make decisions that protect the toy business, but that's not the best thing for making quality films ... The first film and Empire were about story and character, but I could see that George's priorities were changing," (Lucas has denied that the Ewoks were created to sell toys and says he envisioned them as being representative of nature, according to Newsweek).

Some fans find Ewoks to be so annoying and unnecessary that they have even made cuts of the film that omit them completely. But despite hardcore fans' hatred of Ewoks, they were popular with kids — with two live-action made-for-TV movies and an animated series all airing in the '80s — and they did sell a lot of merch.

So with the cute, cuddly, seemingly annoying new alien creatures known as Porgs showing up all over the marketing for The Last Jedi, many Star Wars fans are getting déjà vu. They view the bird-like aliens as yet another example of the franchise succumbing to its financially-driven baser instincts and sacrificing a dark, adult-oriented story in order to appeal to kids and sell toys, and there are already a ton of Porg toys available, which these fans will no doubt point to as evidence of their theory. That may not be a fair criticism — after all, no fans know yet just how Porgs are treated in the film — but it seems that many have already made up their mind about them just based on their cute appearance.

But the hate runs even deeper than that unflattering comparison among some of the franchise's most diehard fan communities. Upon searching "Porg" in Reddit's r/StarWars, the top three results that appeared were all fan-created images depicting the creatures being brutally murdered or eaten, which doesn't exactly inspire confidence that they're super popular within the fandom.

The jury is still out on Porgs for the most part until the movie comes out, and they still have their fans, for sure... but unless Porgs contribute to The Last Jedi's story in a meaningful way and don't distract from the film's overall serious tone, they may be destined to surpass the Ewoks as Star Wars cutest and most-loathed characters.