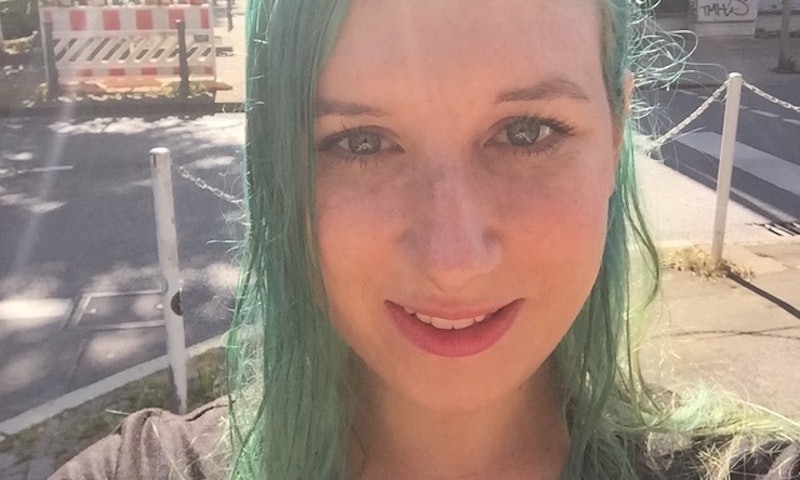 I'd always watched those shows where a medium's speaking to an audience —the ones where they call out a letter and someone whose dead relative has that initial gets a message from the "other side" — with a mix of skepticism and intrigue. So, when MaryAnn DiMarco, psychic medium and author of Believe, Ask, Act, offered me a reading, I had to see what it was all about. Little did I know how much useful advice she'd have regarding people on this side.

DiMarco has communicated with the dead since she was five and now does so on behalf of her clients. It sounds crazy (and a little creepy), but I've always had a fascination with the occult and believed anything is possible. Given that the sum of all positive integers is -1/12 (look it up), the laws of physics don't really rule out anything in my book.

Mostly, I was dying to know what my ancestors had in store for me. But something else on the back of my mind — something DiMarco didn't know — was that I was considering ending my relationship. A few weeks prior, my boyfriend had used the phrase "don't play the woman card," one of the absolute worst things you can say in my book. I was trying to put it out of my mind. But apparently, even when you hide something from yourself, you can't hide it from a psychic. Or so I would learn.

Over Skype, a tangible warmth radiated from DiMarco, and the intensity of her gaze gave off the impression that she really was seeing more than met the eye. But I had no clue what she was talking about.

First, she mentioned April and November and asked if either included a loved one's birthday, anniversary, or death. I couldn't think of anything. Then, she saw my deceased maternal grandfather wrapping his arms around my living grandmother and telling me she was OK. I didn't know if she was referring to my biological grandmother or my step grandmother, I barely talk to either, and I had no idea what might cause either to not be OK. At that point, she told me she was just going to start over and focus on me.

After that, she got a few things right, albeit nothing freakishly uncanny. She told me I had either two kids or two pets (I have two cats) and that one was feisty while another was chill and quirky (which describes Junior and Maxie for sure). She asked if I'd recently moved in with my boyfriend, which I sort of did; I came to visit him two months prior and never left. Apparently, our relationship status registers psychically as "living together." She said that just feeling my boyfriend's energy made her laugh.

Then, it got interesting. DiMarco told me I needed to stop hiding things from my partner and stop letting past relationships dictate my behavior because my current partner is not like my exes. "He's not going anywhere," she said. I was confused at first: I didn't think he was going anywhere. I was the one thinking of leaving. But over the course of the next few months, her words started making more and more sense.

When I told my boyfriend what DiMarco said about him, he responded, "Why is a medium talking to me? Am I a ghost!?" But she actually doesn't just talk to the deceased (who aren't necessary ghosts anyway); she also has intuitions about the living — often better ones than we ourselves do.

Over the course of the next few weeks, my boyfriend kept saying little things that offended me, and I kept not telling him. Then, I remembered DiMarco's advice: "talk to him." Why wasn't I? Probably, I realized, because of exes who either got defensive or actually broke up with me when I criticized something they said or did. Then, the other thing she said clicked: I shouldn't predict my current boyfriend's behavior based on my exes' because they're totally different people.

After that, I got brave. When he made offensive remarks, I explained to him why they hurt. I told him why "woman card" is such an awful phrase. And instead of gaslighting me like my exes did, he actually apologized. He admitted to being ignorant. He said he'd try to do better. If I'd just known he'd be so accommodating, I wouldn't have kept so much bottled in for so long.

Where That Leaves Us Now

I forgot about the reading until April, when I started feeling that impulse to get out again. The situation was pretty much the same. He'd told me he wasn't sure if he was a feminist — if someone's not, that's a major deal-breaker for me — and I thought, "welp, this is it." But then, I again remembered DiMarco's advice to always talk to him. So, I sent him a text explaining why I need a partner who's a feminist. To my surprise, he sent me a long, thoughtful response explaining that our views did line up but he was just hesitant to claim authority on a cause I had so much more expertise on. Since then, he's been sending me sweet messages like "hey my favorite feminist."

Now that I've learned how much you can gain by asking for what you want instead of assuming you won't get it, my approach to other things has changed, too. Instead of turning down work because it sounds like too much time investment for the pay, I'll ask for higher pay. Instead of declining an invitation from a friend because I don't like the plans they've proposed, I'll propose different plans.

Seven months after the reading, we're still working through the same issues we were then. It's possible that one day, I'll look back and say, "I cannot believe I stayed with him that long because of a medium." I have no clue how long this relationship will last. What I do know is that, before I decide he's just not the person for me, I'll give him the chance to become that person.

More like this
The 19 Best Tweets & Memes About Bisexual Awareness Week
By Lexi Inks
How To Politely Reject Someone Who Keeps Asking You Out
By Laken Howard and Lexi Inks
21 Signs You're Not In Love Anymore
By Sara Altschule, Kathleen Ferraro and Carolyn Steber
Are Quality Time & Gift-Receiving Love Languages Compatible?
By Lexi Inks
Get Even More From Bustle — Sign Up For The Newsletter