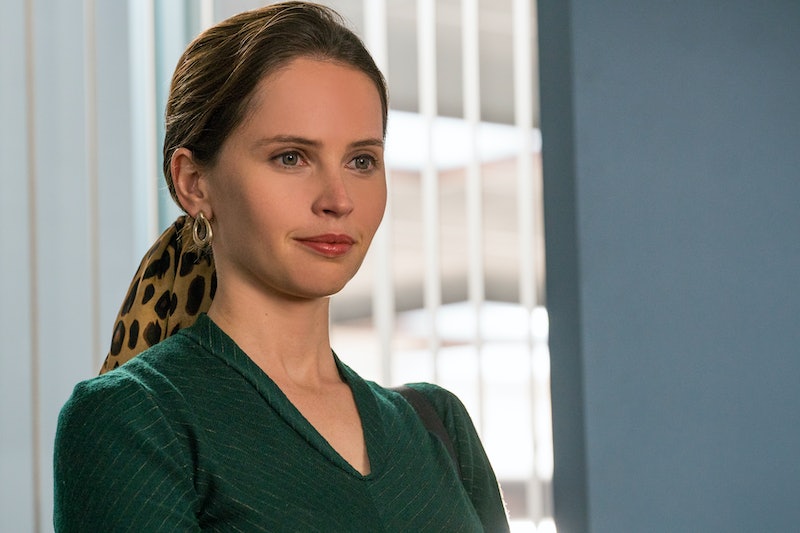 It's hard to know, when you sit down to watch a movie based on a real-life person, how much of what you're seeing on screen is true. The Freddie Mercury biopic Bohemian Rhapsody has faced criticism for altering details in Mercury's life, and the Mary Queen of Scots movie has made some changes to history as well. With a number of biopics hitting theaters this holiday season, how does the Supreme Court Justice Ruth Bader Ginsburg biopic On the Basis of Sex, starring Felicity Jones, fare in comparison? Since RBG is an incredibly beloved figure, fans of hers are probably wondering how accurate On the Basis of Sex actually is in its portrayal of Ruth.

It sounds like the film is pretty accurate to her life, and many of the details included are true. Considering that the screenplay was written by Ginsburg's nephew, Daniel Stiepleman, there was plenty of opportunity to get things exactly right. "I’d look at her lecture notes and the drafts of her briefs and her letters to other lawyers," Stiepleman told The Wrap, "and then at night we’d eat dinner and drink wine and talk about her marriage," he said of getting every detail.

For example On the Basis of Sex includes how, when Ruth and her husband Marty were both in law school, Marty was diagnosed with testicular cancer. While Marty underwent treatment, Ruth attended his classes as well as her own, typed up his dictated papers in addition to completing her own course work and taking care of their toddler. Armie Hammer, who plays Marty Ginsburg in the film tells Bustle that those scenes were "100 percent" accurate.

"That really just goes on to reflect the nature of their partnership," Hammer says, speaking over the phone about Ruth and Marty's equal partnership. "They understood that together they would do whatever needed to be done for the success of each other and for their family. " Hammer added, "The entire script was also vetted by Ruth herself and so, you know, good luck trying to slip anything past her."

Ginsburg herself seemed impressed with both Hammer and Jones. At the New York premiere of the film, Ginsburg participated in a Q&A session during which she praised the two actors. "Did you notice the scene in which he is in the kitchen chopping vegetables?" Ginsburg said of a scene with Hammer cooking, according to Variety. "That was very, very reminiscent of Marty." Of Jones's performance, Ginsburg said, "The most remarkable thing is to hear Felicity Jones, who speaks the Queen's English, sound very much like she was born and bred in Brooklyn," Variety writes.

Though, if there's on scene where Stieplman did take some liberties, it's during Ruth's big argument before federal judges at the climax of the movie. As the movie shows, Jones' Ruth slips up a little, hesitates, and has to compose herself. But according to The Cut, Ginsburg says that definitely didn't happen. "I didn’t stumble," she told the audience during the post-screening chat, setting the record straight.

Jones also raises her voice a bit during that scene and others in the film, contradicting what the documentary RBG had to say about Ginsburg's level-headedness during her oral arguments. According to what RBG directors Julie Cohen and Betsy West tell Bustle, Ginsburg had an almost Zen-like personality when she argued a case. Listening to some of her cases from the '70s, West wondered, "How did she not just lose her temper?" Her practical approach was to stay calm. "It doesn’t work to get angry at the justices, you have to meet them where they are intellectually and teach them. And that’s how she won. By being super smart and strategic," adds Cohen.

It's understandable that Stiepleman and On the Basis of Sex would change a bit in order to add dramatic tension to the film, as well as to show Ruth's growth as a litigator. It's good to know, however, that the majority of the movie provides an accurate portrayal of the beloved, notorious, Ruth Bader Ginsburg.