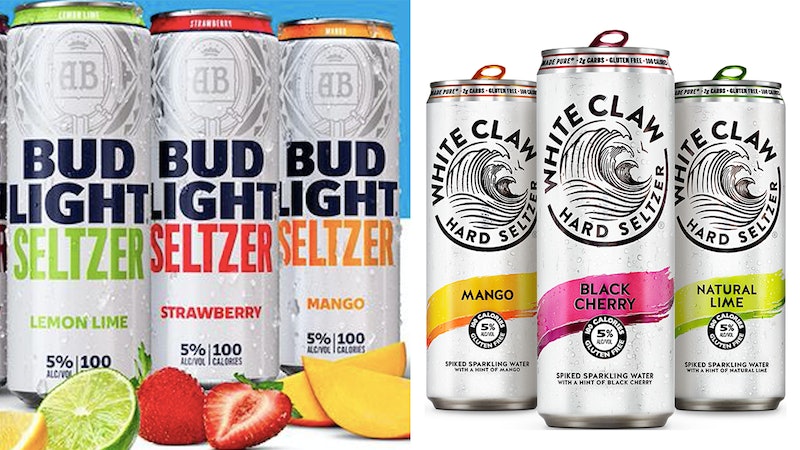 If you haven’t been converted to the church of hard seltzer, the time to get indoctrinated is now. There are hard seltzer OGs like White Claw and Truly as well as newcomers from old classics like Bud Light Seltzer, which hit shelves in early 2020. Whether you’re just dipping your toes into the hard seltzer waters or wondering how Bud Light Seltzer compares to White Claw, there is a spiked, sparkling drink for you.

Though the new hard seltzer touts the Bud Light name, it (fortunately) is not a beer-flavored hard seltzer. Like its predecessors, Bud Light Seltzer is meant to taste like your traditional flavored seltzer water—your La Croix, your Bubly, your Kirkland brand Costco sparkling water—with an alcoholic twist. It’s made from cane sugar and natural fruit flavors and will be available in four flavors: black cherry, lemon-lime, strawberry, and mango. After Super Bowl LIV, Bud Light Seltzer tweeted out a picture of a pretzel flavored hard seltzer. Although that appears to just be a nod to Post Malone’s Super Bowl ad and not an announcement for a savory seltzer flavor.

Now, for the defending champ: White Claw. According to CNN Business, White Claw currently makes up 58% of hard seltzer sales. It established what we expect hard seltzers to look and taste like: light, not-too-sweet, like someone whispered the words “fruit” and “alcohol” into a glass of sparkling water. It contains 5% ABV, which the company says is a gluten free alcohol base.

Both White Claw and Bud Light Seltzer are low in sugar and have 2 grams of carbs. Like Bud Light Seltzer, White Claw also comes in 12-packs of 12-ounce cans. The main difference between the two is the flavor offering. White Claw currently offers more flavors than Bud Light Seltzer including Black Cherry, Ruby Grapefruit, Natural Lime, Mango, and Raspberry. In April, they also launched White Claw Pure, which is said to be a solid vodka soda alternative.

So, if you’re looking to try out a new hard seltzer and don’t mind having a limited flavor selection, keep an eye out for Bud Light Seltzer. If you’re a fan of White Claw and its ilk, you’ll likely feel no differently about Bud Light’s new drink.