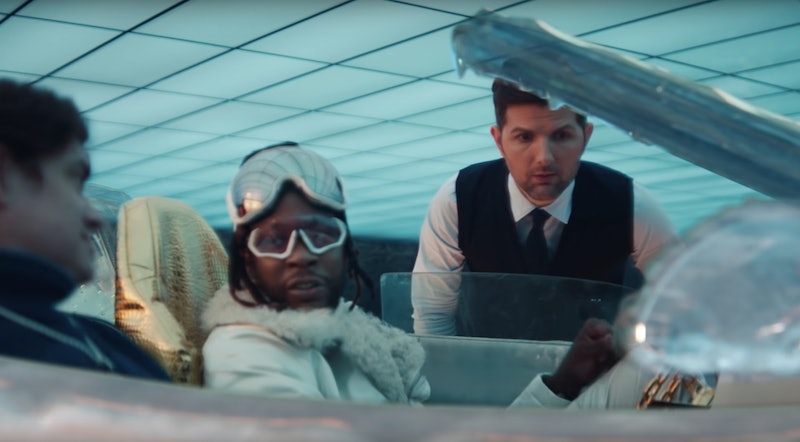 With the Big Game now just days away, Expensify released its Super Bowl commercial starring 2 Chainz and Adam Scott and the visual is awesome for so many reasons. Not only does it feature 2 Chainz in all of his eccentric and over-the-top glory, but Scott's stoic, nice-guy aura totally makes for an amazing contrasting collaboration between the two. And that's not even the best part. It turns out, the commercial might give fans who may may envision themselves taking part in 2 Chainz' lavish lifestyle an actual shot at the dream. It turns out the ad will give you a chance to win Expensify money from the comfort of your couch during Sunday's game.

Sports Illustrated noted that when it makes its television debut, Expensify's commercial will become the "the first expensable" video to ever play during the Super Bowl. The software development brand's website is encouraging viewers to snap a photo of the receipt featured in the Super Bowl ad using the Expensify app for the chance to win the equivalent of the car's value in cash — which currently stands at a whopping $200,467.

According to Expensify, fans can enter to win by doing the following:

In the advertisement, which starts out as a music video shoot, 2 Chainz performs in a baller-ific iced car which is powered by a seafood tower. True to his persona as the host of Vice's Most Expensivest TV show, the rapper goes all out in the vid, decked out with several gold chains, rings, and watches as he raps about a "day in the life of a baller." Scott, who plays the role a record label exec in charge of finances for the project, enters to interrupt the shoot and remind 2 Chainz to keep paper receipts so that he can be reimbursed for the video's cost.

Scott taps on the car's window to get the rapper's attention with 2 Chainz rolling it down to simply respond, "nah, I have Expensify for that." While Scott's character remains confused, Chainz rolls up the window and dismisses him with a quick: "Skrrt!" And the moment is, hands down, the best thing you're going to see all day.

Expensify, which is an expense management platform, recently released two different versions of the commercial — a 30-second spot that will air during the game and an extended 60-second version which can be viewed solely online, according to Sports Illustrated. AdWeek also noted that the visual, which will air sometime during the second quarter of the game, was led by JohnXHannes New York, with Andreas Nilsson of Biscuit Filmworks serving as director.

Adding to the sheer greatness of the ad, Scott posted a link to the video on Twitter with the caption, "@2chainz and I are best friends." (Oh, to be a fly on that wall.)

Meanwhile, the Atlanta-based MC also shared the full version of the "Expensify This" song and video on his YouTube page and posted a clip of it to Instagram. His caption revealed his excitement for the commercial which he referred to as "another check off his bucket list."

This year's Super Bowl ads are shaping up quite nicely for entertainers in the music industry. So far, fans have been privy to snippets of spots from Cardi B and Lil Jon, who will appear in this year's Pepsi ad, and The Backstreet Boys who joined forces with Chance The Rapper to deliver an amazing project for the Doritos brand.

If 2 Chainz and Adam Scott's recent delivery in "Expensify This" is any indication this year's Super Bowl ads are going to be super lit.