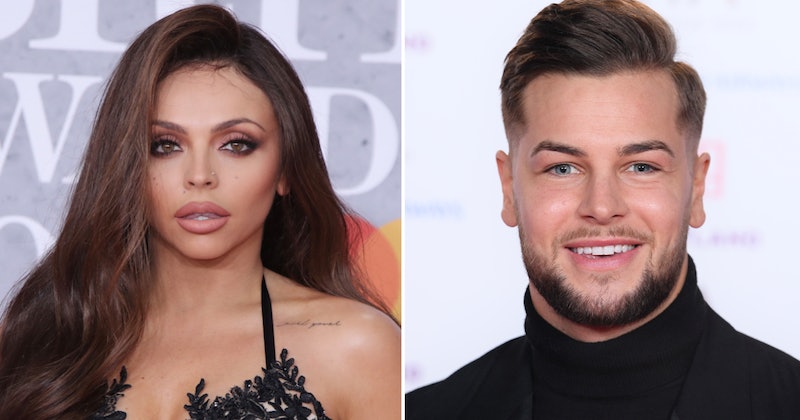 Jesy Nelson and Chris Hughes sent the rumour-mill into overdrive last month after news broke that the pair appeared to be dating. Sadly, just three weeks later, it was reported that the Little Mix and Love Island stars had already thrown in the towel. However in a sudden turn of events, it now seems those original reports were false or the pair are giving things another go. So how did Jesy Nelson and Chris Hughes meet?

Well how they actually met is somewhat of a mystery, although I'm sure being part of the celebrity circle most likely had some influence. Bustle reached out to both parties for comment on how they first met, and I'll update you with any new information once it becomes available. Nelson and Hughes' first official date was rumoured to have taken place just last month at the Harry Potter-themed bar, The Cauldron. According to the Daily Mail, the couple enjoyed a night of cocktails, and after uploading videos of the romantic evening on Snapchat, fans of the duo quickly realised that the pop and reality stars were actually out together on a date.

Since then, the couple kept details of their relationship fairly quiet, and as reported by Heatworld, the "Woman Like Me" singer reportedly put the relationship on hold earlier this month. At last week's BRIT awards ceremony, Nelson also took her best friend Dilem with her along to the awards in an example of total BFF goals. However, after being spotted together at London City Airport this week, it is now assumed they're back together again.

According to Closer, the break-up hit the Love Island star hard. The source said: "Chris has been upset by the break-up." Regarding Nelson, they went on to add: "For now she’s going to enjoy being single until the right man comes along for her to spend her time with." Things have certainly seemed to have moved on since then, however, and after a cancelled flight, the couple made things Instagram official during their wait in the departure lounge, reports the Evening Standard.

Before news of the pair's reconciliation had been revealed, it was reported that Nelson and fellow X Factor winner, James Arthur. However, as reported by Digital Spy, Arthur was quick to dismiss the claims, and took to social media to clarify the status of his relationship with Nelson. In a post on Twitter, the "Impossible" singer said "Firstly, we were not kissing we were talking closely because it was loud as f**k in a club. Have you ever tried having a conversation when theres loud music? You gotta be tactile. Sad state of affairs when a guy and a girl can’t sit and chat without being romantically involved." Fair point, James Arthur, fair point.

During this years BRIT Awards ceremony, Little Mix took home the awards for British Music Video of the Year for their smash hit "Woman Like Me." The group were also nominated in the Best British Group category, and performed their BRIT award-winning track live in a special performance which featured Ms. Banks.