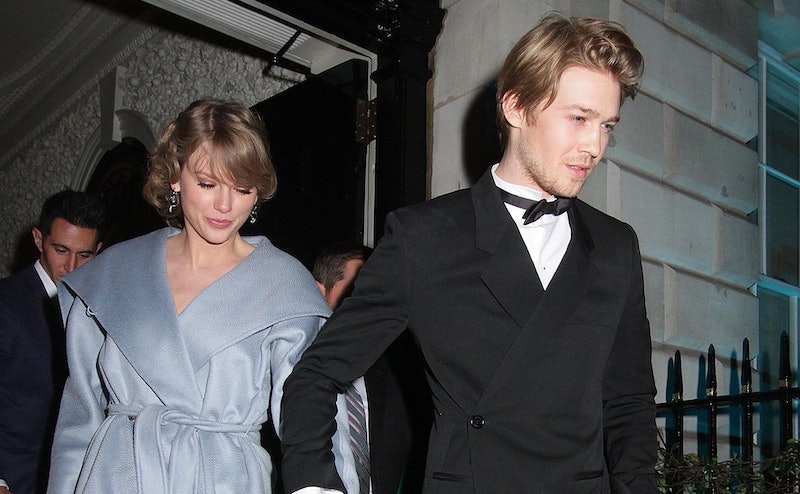 Taylor Swift has mostly been pretty open about her love life. That changed during her Reputation era though, when she made it very clear that the old Taylor had died. So, stop ringing the phone. Swift's been linked to actor Joe Alwyn for a little while now, but the couple are keeping things uncharacteristically hush hush. Still, I'm really curious to know, how did Taylor Swift and Joe Alwyn meet?

While the reports have yet to be officially confirmed, it's suspected that Swift and Alwyn met at a secret Kings of Leon concert in New York on Oct. 12, 2016. In May of the following year a Swift fan site posted video evidence that Alwyn attended the same event, so it's likely that the lovers first crossed paths here.

The couple managed to hide their budding relationship impressively well, since there don't seem to be any reports or public sightings of them from the time they reportedly met until May, 2017, when that month The Sun broke the exclusive that the two were in fact dating.

As a source reportedly told the paper: “Taylor and Joe are the real deal, this is a very serious relationship." “But after what happened with Tom Hiddleston, they were determined to keep it quiet," they added. As Bustle wrote in Sept. 2016, Swift's relationship with the Thor actor very swiftly became "a punchline, which isn't just unfair — it's insensitive."

As the insider also told The Sun back in May, Swift went to great lengths to hide her preliminary visits to Alwyn in London from the public eye.

"Taylor has flown in via private jets and her security has made it a military-like mission to prevent her from being seen," the source said, adding that Swift's also "been walking around with Joe in London using disguises, like scarves and hats, to keep her identity under wraps." Come to think of it, there have been a few times when I've walked past someone donning a clearly fake moustache and an elaborate wig. Could it have been Tay Tay? Probably not.

Now, almost two years on, Swift and Alwyn are starting to make their relationship that little bit more public, with some appearances together. There was no wig or fake moustache in sight when Swift bailed on the Grammys in order to attend the BAFTAs with Alwyn. After the ceremony, Swift posted a snap of her in her princessy Stella McCartney dress onto Instagram, captioning it: "AHHHHH @thefavouritemoviejust won 7 @bafta awards !!! Bout to go give some high fives — thanks @stellamccartney for this dressss 😆"

It's not the first time she's shared support for Alwyn's work, she previously posted the film's trailer to her Instagram account, captioned: "The Favourite is absolutely phenomenal, and it opens in NY and LA tomorrow— Swipe to see cities and dates!" She was super excited since Alwyn had starred in the award scooping film The Favourite, where he played one of Queen Anne's barons, Samuel Masham. I imagine you can expect many more appearances from the couple, with increasing frequency, in the very near future.