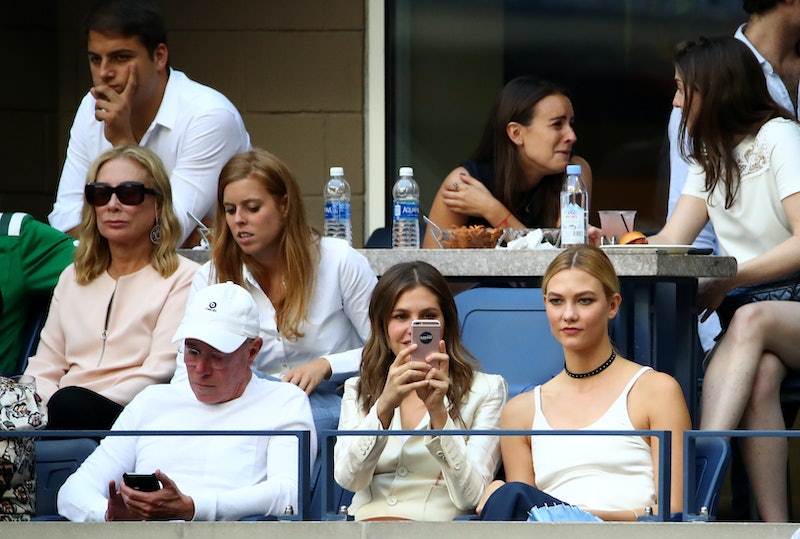 The level of their friendship was revealed when Victoria’s Secret model and coding queen Karlie Kloss announced her engagement to her long-time love Joshua Kushner last month, as Bustle reported. The venture capitalist (and Ivanka Trump’s brother-in-law) reportedly got down on one knee during a romantic weekend together in upstate New York, according to People, and Kloss was quick to take to Instagram (where else) to make her special announcement and to gush about her boyfriend of six years. “I love you more than I have words to express. Josh, you’re my best friend and my soulmate. I can’t wait for forever together. Yes a million times over 💍” her post read.

However, fans may have been surprised to see a certain royal make an appearance on Kloss’ Instagram story of her delivering the news to her friends and family. Alongside her sisters and tennis champ Serena Williams, there was eighth-in-line to the British throne, Princess Beatrice (according to Town and Country, Kloss reportedly exposed the Princess’ secret Instagram handle in the process). One is the Queen’s granddaughter and cousin of Princes William and Harry, the other is a world-dominating supermodel. So how did the two become such good pals? While neither have revealed when they first met, it turns out their friendship goes back years.

Kloss is no stranger to having friends in high places; Harper’s Bazaar calls her the industry’s "most well-connected supermodel," with a social circle that encompasses major players from the worlds of fashion, music, sport, tech, and even politics. She shared a US Vogue cover with the Taylor Swift and appeared in her music video for "Bad Blood" in 2015. She is often seen out and about with fellow models Gigi Hadid and Jourdan Dunn, and she has strong working relationships with Stella McCartney and Diane von Furstenberg.

She’s also been seen at events with Wendi Deng, ex-wife of Rupert Murdoch, and in 2016 was pictured enjoying the US Open with her soon-to-be sister-in-law, Ivanka Trump, as the Daily Mail reports. And who else was there sharing the same box? Princess Beatrice. Kloss and Beatrice attended the same wedding later that month in the south of France, that of fashion blogger Colby Jordan and art collector Alberto "Tico" Mugrabi. Kloss later shared a selfie of them at the event, calling Beatrice her "wedding date."

While her sister Princess Eugenie may be busy planning the second of this year’s lavish royal weddings to her beau Jack Brooksbank, Beatrice will no doubt be anticipating a party of her own as she celebrates her 30th birthday today. But Kloss won’t be the only star who could be in attendance, as the Princess also runs in some pretty star-studded social circles.

According to OK!, alongside Kloss, she counts Ellie Goulding, Ed Sheeran, and — perhaps surprisingly — Mila Kunis and Ashton Kutcher among her friends. Kloss and Goulding actually enjoyed a holiday with the princess in the Jordanian desert of Wadi Rum in April 2018, as W reported. The trip was also attended by Misha Nonoo, a designer and close friend of Meghan Markle. There are clearly a lot of mutual friends in this friendship group.

Another possible link between the two is Cara Delevingne. With her aristocratic background and phenomenally successful modelling career, the supermodel straddles the world of fashion and royalty like no other, and has been known to hang out with both Kloss and Beatrice's sister Princess Eugenie, as the Daily Mail reports. Whatever the basis for this flourishing friendship, it's clear the pair have a firm bond. The question now is will Beatrice be a guest of honour at the Kloss-Kushner wedding? We'll have to wait and see.