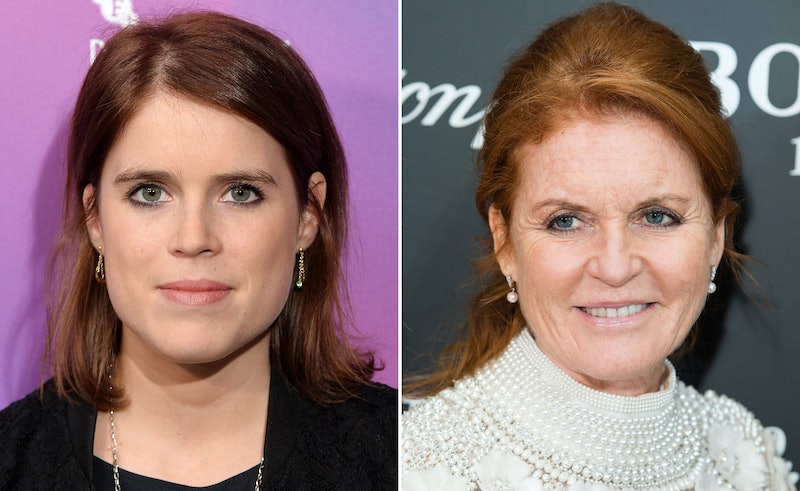 With Princess Eugenie and her beau Jack Brooksbank’s nuptials on the horizon, I've spent way too much time wondering what will Princess Eugenie’s wedding be like. Unlike her cousins Prince William and Prince Harry, she has a little more freedom when it comes to her big day. So what will she do? Personally, I think she's a super stylish gal — so you can bet she'll have a gorgeous wedding.

As it happens, Eugenie's mother Sarah Ferguson was on BBC’s The One Show on Monday evening. During the interview, she spilled a few details about the upcoming ceremony and it's got me super excited. Giving some insight into what we can expect from the wedding, she said: "Eugenie is very controlled, she is so sorted. She knows exactly what she wants."

Ferguson then went on to reveal that the wedding will be "very contemporary" and "very inclusive". She added: "They're all about love and they want this wedding to be about that, to include everybody to really absorb the love they have for each other with everybody else."

Beatrice and Brooksbank are expecting 1,200 guests on their big day, which is taking place at St George's Chapel in Windsor on October 12th. If that venue sounds awfully familiar, it’s because that’s where her cousin Harry recently tied the knot with Suits actress Meghan Markle.

Unlike the prince though, it’s been reported by PEOPLE that the wedding is going to be paid for “privately” - which makes sense, given that Eugenie isn’t technically a working royal. It's still undoubtedly a tough job catering for so many people. However, Beatrice's mum, Ferguson, and her father, Prince Andrew, are said to be helping her every step of the way. A source told Vanity Fair: "Sarah and Andrew are helping to organise the evening party. The plan is for a marquee to be set up in the grounds and dancing late into the night...Sarah is bringing a very eclectic and exciting guest list to Windsor."

As for alcohol on the big day, well, it's highly unlikely they'll have any trouble in that department. You see, Brooksbank is currently the UK ambassador to George Clooney's tequila brand Casamigos. On The One Show, Ferguson joked that the groom will be providing plenty of tequilas on the big day. She laughed: "[Jack will] just hand me the tequila and say, 'Come on mother-in-law and down it!'"

It’s also been reported by Vanity Fair that after Eugenie and Brooksbank officially get hitched, they’ll retreat to her father Prince Andrew's home for the reception — the Royal Lodge, which is located just down the road.

If you're wondering what Ferguson thinks of her future son-in-law, he's definitely got her seal of approval. She described him on the BBC show as "an amazing bringer of light and joy." As for Prince Andrew? He hasn't revealed his thoughts just yet but I'm very much under the impression that this is one tight-knit family, following Eugenie and Princess Beatrice's recent Vogue interview. So I think it's safe to assume Brooksbank has made a good impression on everyone.

While the groom may be bringing the tequila to the wedding, Ferguson and her former husband the Duke of York will apparently be the ones bringing the party. Sounds like it’ll be a wild shindig. Hey, just a quick question, how does a girl score an invite to a royal wedding reception? Asking for a friend.

More like this
4 Surprising Celeb Throuples That Got The Internet Talking
By Sophie McEvoy
Laura Anderson Pulled The Ultimate Girl Power After Her Break-Up
By El Hunt and Megan C. Hills
Emily Atack’s Net Worth Would Make Charlotte Hinchcliffe Proud
By El Hunt
David Beckham’s Controversial Qatar Deal Skyrocketed His Net Worth
By Catharina Cheung
Get The Very Best Of Bustle/UK
Sign up for Bustle UK's twice-weekly newsletter, featuring the latest must-watch TV, moving personal stories, and expert advice on the hottest viral buys.