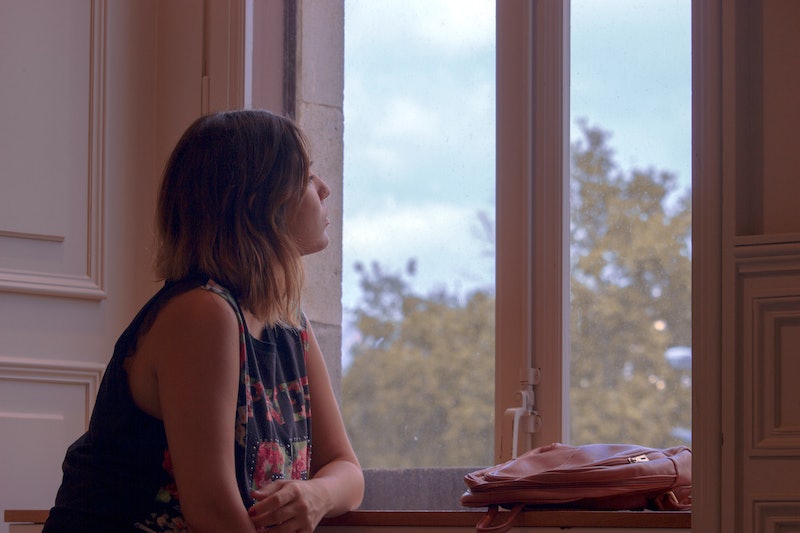 Negative thinking could be considered a talent of mine, a drive. The way some people pick up a flute or a tennis racket and simply have the knack, my capacity for self-loathing and imagining disaster scenarios is impressive. One thing I’ve gathered from my time in therapy is that my negative thought cycles began as a way of coping with serious childhood trauma. I guess the logic is that if I think of bad stuff before it happens, or I think poorly of myself before someone else does, it acts as some form of protection from more bad. It prepares me.

Understanding the origin lends compassion toward the self-centered nature of the negative thinking struggle — but it also underlines that it’s a helluva pattern to break. According to research, trauma wires your neural pathways differently. Mollie Vollinsky LCSW, tells Bustle that in her trained therapeutic modality, EMDR (Eye Movement Desensitization Reprocessing), it is believed that ways of thinking and feeling — both physically and emotionally — can get get "stuck" in our brains to ensure survival.

“When you're a child and you touch a hot stove and it burn your hand, your brains stores the information to not touch hot stoves. This is a healthy adaptive thought,” Vollinsky says. “Consequently, if something traumatic happens to you, you might learn to mistrust people, have low self-worth, or have panic attacks around triggers of the initial trauma.” Those are the patterns your brain moves on.

It’s not impossible to change, but cruel or dark self-talk can be compulsive. This isn’t to say I don’t live a full life, often bright and joyful and brimming with hope, creativity, connection — but it’s accompanied by a great deal of cyclical chatter and obtrusive anxiety. I’ve tried a lot of things to combat this. Therapy, nutritional guidance, energy healing, recovery meetings, and hypnosis. And while these things have helped in varying degrees, it continues to plague me.

When I recently wrote an article about how to practice liking yourself, one of the experts, therapist and speaker Joyce Marter, gave the advice of looking at the negative voice in your head as a character, because naming your self-loathing can help you to separate from it. Assigning it attributes, a name. Something about this advice seemed absurd, but also intriguing. To name the thoughts and feelings might offer a necessary distance from the negativity. At the very least, the bias of the messages might become more obvious and feel a little less like total truth.

I decided to try it. I decided to name the ugly, often relentless voice in my head, the feelings of pain, the stress to my adrenals. They would be Terry. I imagined her as part demon, part belligerent drunk uncle, and part Dolores Claiborne as portrayed by Kathy Bates.

For one week, Terry would be responsible for all my worry, negative thoughts, feelings of fear, sadness, and jealousy. My plan was to keep track of these thoughts. Below is an abbreviated report of the time I spent with Terry, observing just how much she had to say.

While I was in a remarkably pricey health food market in Venice getting a smoothie, Terry started giving me some real sh*t about my love life, and in particular, the panic attack I had when scheduling a Hinge date for that evening. The guy seemed cool, but when we texted about time and place — Hollywood at 10 p.m. on a Tuesday for God's sake — my body felt an intense resistance, similar, I imagine, to jumping from a speeding freight to dodge an assassin. My body rang with electric dread.

I canceled the date and didn't reschedule, knowing I wouldn't be able to show up a few days later, either.

“You are a freak,” Terry yelled at me as I sipped a very strange if not repulsive mint-pistachio collagen beverage. “You’re so damaged you won't even try to date healthy people. You’re attracted to people who hurt you. Remember your stalker and your absent dad? That’s your wheelhouse. You’re never getting over that shit.”

“Put a sock in it, Terry,” I said, knowing she was right.

Today after work, I sat inert on the couch as Terry imagined my last romantic interest's perfect future. She assured me he would fall in love and a marry a woman I know he has a crush on. I imagined them slow-motion laughing in impressive outfits, having sex until dawn and eating ice cream off of each others' naked bodies, collaborating on a heartwarming but aesthetically impactful short film.

As I made raviolis and scrolled through his crush’s pics on the hallway to hell that is Instagram, Terry yapped about how disappointingly basic and conventionally attractive she seemed.

It bothered me that Terry kept prodding me to compare myself to this woman. Terry is not a feminist. She thrives on the heat of jealousy and judgment. It seems to give her adrenaline, and a direct line to the pain/pleasure phenomenon. I took a deep breath then blocked Instagram on my phone.

About 20 minutes later, Terry told me to unblock Instagram on my phone. After more torture-scrolling, I blocked it again. We did this dance for a while.

I woke up with a groan and a chest ripe with panic in my blocked third chakra — responsible for well-being and common sense — as Terry told me I would never greet the day without my body feeling like a gong for grief.

After a beat, choosing to consider Terry as a separate gremlin entity did allow me some relief. Part of my consciousness achieved a healthy skepticism.

Later, as I struggled to park the Honda Odyssey I inherited from my Uncle Mike, Terry told me to go back to NYC because I’ll never make a home here in LA. Despite the vital dose of Vitamin D, Terry said life is even more depressing in constant sunlight than in a city winter.

When I finally decided to just eff-it and park in a Wells Fargo lot, I sat in my car and quietly told Terry that I was trying my best.

If Proust were me, he might say, Terry, c’est moi. Although I was trying to disconnect myself from the idea that she and I were one dark fusion, Terry was on fire that day. She got into a fight with my mother on the phone outside of Kundalini yoga before class, and some guy in soft shorts, a soon-to-be cohort at the 11 a.m. “Shine” kriya, scurried past me, frightened.

I sat “meditating” before we started, fully possessed by Terry. She stops communicating in thoughts when in her glory, she's more just negativity embodied. Static, nauseous, a thick dark dream-state.

The breath work we did helped, but Terry was pissed and wanted to leave five minutes before it was over.

“You were internalized well as a young person,” Dr. G said, after I described my upbringing to her and the related, current struggles I have with intimacy. My childhood wasn’t exactly A Child Called It, but it was no breeze.

“That’s where a lot of that voice comes from. A hostile, chaotic environment,” Dr. G said. Terry and I decided we liked this woman, and we would be returning.

I lay immobile on my aunt’s couch after work, lamenting lost love and unpaid bills. Terry told me that the book I'm writing is dumb, I am a cursed, childish wastoid, and I will always feel a lack.

I started crying as my aunt watched NCIS and drank Propel. She doesn’t like it when I cry; it upsets her on a primal level. We decided to do some errands to get out of the house.

She had the random idea to go to the library for books on our way back from Vons, and it was as though a divine force willed us there — we ended up participating in a community drum circle in the rec room for well over an hour.

On this last day, my perspective on Terry shifted. I started feeling bad for her rather than simply wanting to destroy her.

As we say in recovery, hurt people hurt people. Of course Terry is a bitter, defensive, fear mongering a-hole, right? Terry's been wronged. Terry got dealt some bad cards, so that’s what she’s got to play.

Terry doesn’t want to be the boss, though, you know, she just wants to be acknowledged. Terry wants a seat at the table. She wants to be proven wrong once in a while. But I realized that cancelling her out with blanket positivity or refusal to listen is a breach of contract. It invalidates the reason she's so damn loud in the first place.

So maybe I have to make a form of peace with Terry, or make peace that I can’t make peace with Terry. To instead treat her like a kid throwing a temper tantrum. You want them to STFU, but first you have to figure out why they're freaking out.

As For The Future

The next time I went back to therapy, I told Dr. G how the experiment helped me to realize how much I hate and want to invalidate my self-loathing, how I think that might cause it to worsen. She offered that perhaps Terry was developed as a survival strategy, and to continue keeping track of Terry's feelings might be fruitful. Dr. G then asked me, very earnestly, "What does Terry want, Annakeara?" I laughed loudly but didn't have an answer.

Dr. G suggested that the next time Terry shows up, I ask her.