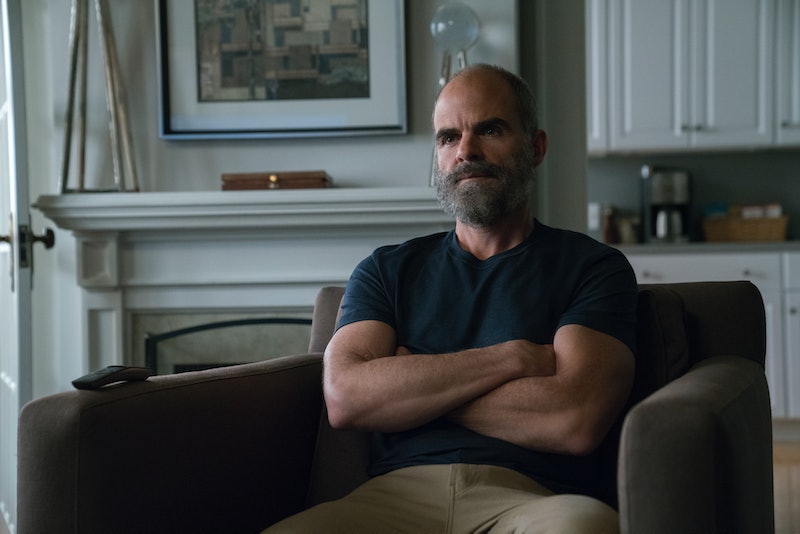 Spoilers For House Of Cards series finale. House of Cards was originally about Frank Underwood's story, so it makes sense that the final episode of the series focuses on the two characters that were closest to him – his wife, Claire Underwood, and his longtime lackey Doug Stamper. While Season 6 had plots focused on major corporate influence, Claire's White House takeover, and the continued efforts of the world's unluckiest journalist, Tom Hammerschmidt, the ending of House Of Cards Season 6, and the end of the entire series, involves blood, betrayal, and the final nail in the coffin — or letter opener in the gut — of the truth about Frank Underwood.

Claire — who drops her late husbands last name and is going by Claire Hale by the end of the series — had spent all of Season 6 trying to suppress the truth about truth about her and Frank's rise to power. After having Cathy Durant, Jane Davis, and Tom Hammerschmidt killed, there's only one living person that can connect her with the worst of Frank Underwoods crimes — Doug Stamper. Doug is forced to watch Claire try to vilify Frank and attempt to bury the legacy he dedicated his life to building. So, in collaboration with Claire's former friend and rival Annette Shepard, he begins plotting to assassinate Claire Underwood.

During the finale, Doug is seen shopping around Frank's audio diary to various powerful figures and journalists. The diary itself seems to be primarily made up of Frank's series-defining asides to the camera, judging from the snippets that Doug is willing to share with others. Stamper eventually sends the audio diary to Claire, along with the letter opener that Frank gifted Doug. Doug comes to Claire's office, the oval one, and they briefly talk around each other before getting to the meat of why Doug is there. Doug wants Frank Underwood's legacy to live on, so much so he believes Claire's unborn daughter should be named Frances. And Claire needs to let past to die — and she'll kill it if she has to.

In the final scene, Claire pushes Doug to admit that he was the one who killed Frank, who had apparently been storming towards Claire's bedroom to kill her in a jealous rage. He admits he killed him to allow his legacy to not be tarnished by such an obvious act of murder, by feeding him pills and triggering an overdose.

Frustrated that all his work to secure his legacy is getting thrown out, Doug holds the letter opener to Claire's throat. Claire talks him down, takes the letter opener from him, and pushes it into his gut. Doug bleeds out on the Oval Office rug, and Claire puts her hand over his face to suffocate him and put him down — just as Frank put down an injured dog in the very first scene of the series.

The ending of House Of Cards isn't the cleanest. There's not much closure to be found in the plots related to the powerful Shepard family, and no confirmation of whether or not Claire Underwood will launch the atomic weaponry she's been threatening the world with for the later episodes of the season. However, the death of Doug — the last person fighting to cement Frank Underwood's legacy as a hero and not a murderer — and the story that defined House Of Cards, the self-made myth of Frank Underwood, has come to a conclusive end.