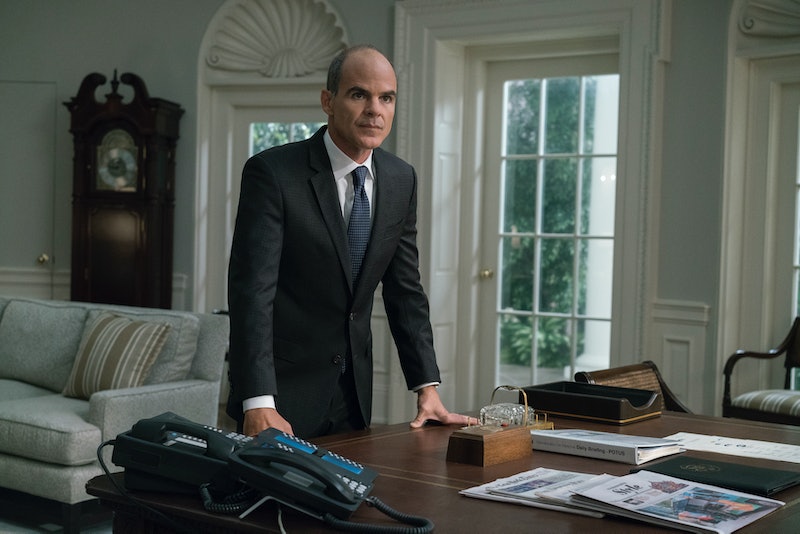 There's a new boss in the Oval Office, and her name is Claire Underwood. After a tumultuous Season 5 that included a drawn-out election that ultimately pit Underwood against Underwood, Claire is finally in power as the Commander in Chief of the United States of America. But there was a lot of political wheeling and dealing and it won't be too easy for the first female president, especially with her deceased husband's lackey biting at her ankles. He definitely has an axe to grind, but it can be hard to remember exactly what happened to Doug Stamper in Season 5 that's made him so bitter.

Since Season 1, Stamper has pretty much followed Frank around like a puppy, or more like those fish that hang out with sharks, sucking up the parasites and gunk that threaten to harm their killer host. Doug was Frank's constant support and most loyal servant, always happy to help dig up dirt or cover it up, depending on what the Underwood Political Machine required at any given time. And by the end of Season 5, well, Doug was more than willing to jump under the bus for his beloved boss once more. But I'll get to that in a minute.

He Was Still Frank's Chief-Of-Staff

But let's start from the beginning. At the start of Season 5, Doug was still serving as President Frank Underwood's Chief of Staff. In the first part of the season, that meant his number one responsibility was helping the Underwood's fabricate acts of terror near select Republican-leaning polling places, thus suppressing voter turnout for Frank's opposition, Will Conway (played by Joel Kinnaman). However, when it turns out that the plan worked a little too well, Frank yelled at Doug for being the one who overdid it. This caused Doug to run to a bar where he made prolonged eye contact with a glass of bourbon before buying everyone in the bar a round and splitting.

He Started A New Affair

When it comes to romance, Doug found comfort once again in the arms of his Season 4 ladyfriend, Laura Moretti (played by Wendy Moniz), aka the wife of the man that Doug let die while waiting for a liver transplant, in order to save Frank's life instead. But as Season 5 progressed, things got steamy between Doug and LeAnn Harvey (played by Neve Campbell), a political operative and strategist for Claire. Her death towards the end of the season might mean a tough time ahead for Doug.

He & Claire Have Beef

As Claire took her seat as Acting President, Doug started to worry about being pushed out of the inner circle — and rightfully so, as she appointed special advisors and assistants of her own. Doug kind of began to unravel, looking for ways to cement his importance to the Underwood Regime, which Frank was more than happy to provide. Since Frank is dead in Season 6, who knows what that will mean for Doug's future career.

He Took The Fall For Zoe's Murder

In the penultimate episode of Season 5, the Underwoods invited Doug over for dinner, where they gave him the biggest piece of dirty work yet. They asked Doug to take the fall for murdering Zoe Barnes, and Doug, well, he just wouldn't be Doug if he didn't go along with it. It was a pretty fool-proof plan that saved Frank from being exposed by the Herald, and seemed to help Doug get out some of his guilt about poor, dead Rachel Posner, and all the other horrible stuff that eats Doug up inside.

Since that fateful dinner, Doug's "confession" appears to be going according to plan. At the end of Season 5, he was serving house arrest while he awaited trial, which is presumably where the audience will find him at the start of Season 6.

I'm not quite sure what role there is for Doug in a post-President Frank world, but I'm curious to find out. At this point in the game, however, it wouldn't really be House of Cards without Doug Stamper — and the series' showrunners seem to agree. In a Q&A with THR, showrunner Melissa James Gibson announced that, contrary to Frank and Claire's best efforts, "Doug Stamper will never be sidelined!" So who knows how he'll end up come series' end.