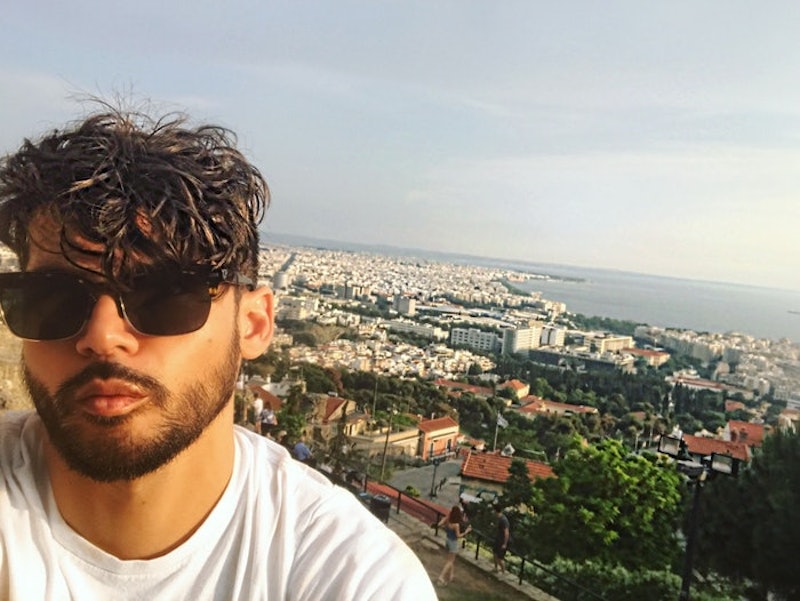 We talk a lot about revenge bodies and glow-ups, but not so much about bodies that are just getting their spark back. This is unfortunate, especially for people whose trauma or abuse is still fresh, when just taking a step toward any kind of healing seems exhausting. I would know: More than a year after partner violence put an end to the person I used to be, I'm still in that space between survival and ~surprise, bitch~ splendor.

Here, between badly lit "before" pictures and radiant "afters," there are endless means of self care you can sample as you try to heal yourself. And as I've learned, the most seemingly ridiculous forms of healing can sometimes be the most powerful. The perm I got this summer is one such "ridiculous" choice; it's also the best beauty experiment I've ever tried. Curls are a good look for me, and as it turns out, they're also good at smoothing out a soul that's been crumpled.

"Crumpled" is the best word I have for what happened in my last relationship, which was also my first. I met David* during my first full year living in New York, in the fall of 2015. He was the first man to ever approach me, and quickly became the first to ask me to be his boyfriend. Over the next year, he would become the first man to meet my parents, to see my hometown, to hold my baby nephews like they were his own. He was the first person with whom I felt at home in the world.

He was also the first man to show me that it's often easier to pretend to be wrong than to protect your dignity, which I had very little of by our first anniversary. The bit I did have boiled up during an argument a few nights later, and it was no sooner than I had stood up for myself that David was pinning me back down, literally. I didn't fight back, too catatonic with disbelief that this paper thing David was crumpling, that he was wadding up at its throat with his hands, was me.

I didn't fight back, too catatonic with disbelief that this paper thing David was crumpling, that he was wadding up at its throat with his hands, was me.

It was only after David and I separated permanently three weeks later that I began to feel like I had failed myself. I was never supposed to be that crumpled thing I seemed to see from outside of my body that night. I was never supposed to be hurt like women in my family had been hurt. I had taken the hard road at every point in my life to steel myself against abuse, and now I felt like I had deceived myself. In one short year, a man who was now a stranger had undone the identity I had built, and to build another seemed to me to require a lifetime I didn't have to live over again. Abuse does that — it makes your future seem fictitious.

Since I felt like I didn't have a future, the body that kept me in the present became my enemy. At the same time, it was my only constant: in that vulnerable, rickety state, when your body is the only thing you think you have, hating it becomes cheap, fast therapy. Which is to say, I hated mine more than ever in those months after David and I separated. It wasn't a new thing for me, just worse.

Even at my most radically unfiltered, un-Facetuned best, I've had to contend with body dysmorphic disorder that had gotten worse in my year with David. For most of that time I was so terrified of saying or doing the wrong thing that I neglected the rituals of self care that kept those old demons of self-hate sleeping. After a year of neglect, they were awake and lurking in every mirror.

....in that vulnerable, rickety state, when your body is the only thing you think you have, hating it becomes cheap, fast therapy.

Trying to get ready became a cruel reminder that I was pathologically uncomfortable in my own body. Doing my hair was particularly painful because the process felt so cumbersome with thick, poker straight hair like mine. Sculpting it every day into the same undercut I saw on every other guy became tantamount to reminding myself that I was as hideous and insufficient in full hair and makeup as I was without them.

So I avoided the mirror and withdrew to things that reminded me of a version of myself David had barely touched. I ordered Seamless from the same place, stayed home at night, went to church, and watched old movies I’d memorized frame-for-frame. Flashdance was a particular favorite.

The 1983 film was shot in my hometown of Pittsburgh, and its protagonist, Alex (Jennifer Beals), captured the essence of the stunning, self-sufficient "Steeltown girl" I used to be, and who I wanted to be again.

Unlike Alex, in those early months after my breakup, I had no "slow-glowing dream" nor "passion to take and make it happen." Nor, in my mind, did I inhabit the world so gracefully as I think she does in the film, as if she knows in her body that she is enough, to inherit the future she knows she deserves. She always looked so comfortable, wild, and playful —  a controlled chaos manifested in the chemical nebula of her permed hair.

To be comfortable in the world in one's own body is an undervalued luxury I had never enjoyed, and Alex's perm symbolized that absence for me. My hair had never made me feel or look comfortable. Across the years, my spikey scene-kid hair, deceptively low-maintenance undercuts, and all the glues, flatirons, and blowdryers only bandaged my body in a shell.

I was no longer comfortable inside of it, and it emotionally made sense to me at the time that a perm would let me out. It's not like I had any better options. There are no scripts for what to do to survive partner violence, let alone for how to navigate the scar-tissued terrain of solitary life afterward. There is only Flashdance, and that flowering, free perm.

To be comfortable in the world in one's own body is an undervalued luxury I had never enjoyed, and Alex's perm symbolized that absence for me.

Although I decided on getting a perm rather quickly, it wasn't until May of last year that I visited my hairstylist cousin. His beauty shop was a safe place for me where, as a child, I spent long afternoons waiting while my mother’s perms processed. It was also where I first learned there were other queer people like me, and that they could survive and live happily in a future that for all I knew only belonged to straight people. It was fitting, then, that the salon became the place I took the first step toward healing. When the rollers came out and the slick, chemically sizzling curls fell down my face, something about the world seemed less tangled. I began to uncrumple.

The adjustment period was not as easy as I expected. I couldn’t wash my hair for a few days at risk of deactivating the ammonium thioglycolate. I couldn’t cement the curls into the places I wanted them to be; I couldn’t broker a ceasefire with summer humidity. It took me a while to realize that this was what comfort felt like: to hold your body still amid the dizziness of the world, and to know that you are enough. I wasn’t sure if I was any more beautiful, or if I had instead become uglier after the perm. But for the first time, I discerned a vision of myself who was as comfortable in the world as Alex.

It took me a while to realize that this was what comfort felt like: to hold your body still amid the dizziness of the world, and to know that you are enough.

The new me may not be here quite yet, but at least now I have the patience to trust in the process. In a way, this means my true glow-up is a gift I can give to myself in the future, when I am ready for it — and I'm not ready now. I’m still not OK. I have not forgiven. Yet, in my curly-haired present, whenever I look in the mirror, the demons hide. I don’t as often see an idol of a victim, but instead the image and likeness of a survivor. The glow may be dim, but it’s enough for now.